Kenya together with its EAC counterparts except Uganda have been ranked with an average road speed of 30-60 Km/hr. 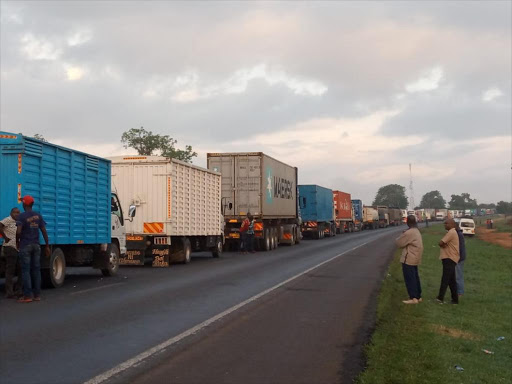 Some of the lorries caught up in a major traffic jam along the Mombasa Nairobi highway on December 7. /MATHEWS NDANYI

An Economics and Finance insight by the international lender says speed at which goods are carried to customers in distant markets is key in determining sustainable and inclusive economic development.

“High-speed roads can carry goods to far-off markets and in turn raise productivity and reduce poverty. They are also important contributors to the development and this is why economists spend time assessing the state of roads, “ IMF says.

The report notes that poor, developing countries have the world’s slowest roads.

Kenya together with its East African Community (EAC) counterparts except for Uganda, has been ranked with an average road speed of 30-60 Km/hr.

Its further noted that the world’s fastest roads are found in richer economies such as the United States, Portugal, Saudi Arabia and Canada.

Kenya has been on track to counter the issue of slow roads in enhancing faster connectivity.

The country over the past decades has had steady improvements to road networks on the back of Chinese infrastructural developments such as the Nairobi-Thika Superhighway and the Nairobi expressway.

With the projects coming into operation, commuters are now experiencing reduced traffic congestion and faster trips as cities and towns attract more investment.

The superhighway, one of the first infrastructure projects to be carried by Chinese companies, has enhanced transport services and urban mobility in the Kenyan capital.

The 50-kilometer expressway runs from Nairobi to the outskirts of the town of Thika in neighboring Kiambu County.

It has boosted the transport networks which have contributed to economic growth, with the more efficient haulage of goods and all-around savings on business costs.

The roadway has also attracted large businesses like shopping malls, banks, and supermarkets. Some high-end residential estates have also popped up.

Enhanced new businesses which consequently resulted in the creation of job opportunities where over 4,000 people were provided with jobs.

The Nairobi expressway, which stretches 27 kilometers through the heart of Nairobi, connects JKIA to Nairobi's Central Business District, the National Museum and the Presidential Palace.

Upon its completion, it was also expected to increase local employment and bring a raft of economic benefits to the congested city.

Kenya's Cabinet Secretary for Transportation and Infrastructure, James  Macharia has previously hailed the expressway as one of the best on the continent.

“ This road will have a big impact in terms of mobility of Kenyans, visitors, businessmen, businesswomen and tourists. This is one of the best pieces of infrastructure ever done in Africa. In fact, it’s the longest expressway in Africa,” Macharia said.

Another project that is making life easier for Kenyans is the dual-carriage Outer-Ring Road in Nairobi. The 13 Kilometer road links the Nairobi-Thika Superhighway to the Nairobi-Mombasa highway.

It serves nearly 2.2 million people, representing 70 per cent of the city's population.

The upgrading of the Kibwezi-Kitui-Kandwia-Usueni Road, which connects the town of Kibwezi in Makueni County with Usueni in Kitui County, has greatly benefited communities along the route.

The road has opened up several villages and created opportunities for business, including those related to agriculture.

Another key roadway with backing from China is the 453 Kilometer link that forms part of the Lamu Port-South Sudan-Ethiopia Transport Corridor.

This was to be Kenya's second main transport corridor. The first corridor runs from Mombasa to Uganda via Nairobi and the country's Northern Rift Valley.

In comparison to EAC, the block has also had major road developments in addressing faster road connectivity.

The 42.4 Kilometer  Arusha Bypass road sponsored by the block, connects Arusha to the Namanga road, all the way into Kenya.

It is intended to reduce the number of days people take transporting goods into Kenya and into Tanzania.

According to logistics experts, across the continent, the cost of moving goods is 3.5 times more expensive compared to high-volume global trade routes.

They attribute the high operational costs to underdeveloped rails, road networks and regulatory bottlenecks which have also been cited as major contributors to slow traffic through Africa’s ports.

The international lender, therefore, advocates for a further venture into road infrastructure developments to enhance high-speed roads in promoting inclusive and enhanced development.

Although, it also cautions on the safety and quality concerns that come with high-speed roads.

“It is difficult to distill road quality into a single statistic and countries might not fully capture the engineering challenges of building quality roads in diverse and difficult terrain,” IMF says.

The lender hereby advises policymakers and planners to assess their road infrastructure relative to peer countries and the value of future road investment.

This could also be extended to monitor speeds on smaller roads which can be critical for many in rural areas.

Government has initiated and implemented projects that upon completion will be a game changer.
Counties
2 months ago

The project is expected to generate 1,500 jobs during construction and 200 during operations
News
2 months ago

A good and reliable transport system network remains vital to the economic development of a country.
Opinion
1 month ago
Post a comment
WATCH: The latest videos from the Star
by ALFRED ONYANGO
Business
12 September 2022 - 21:00
Read The E-Paper