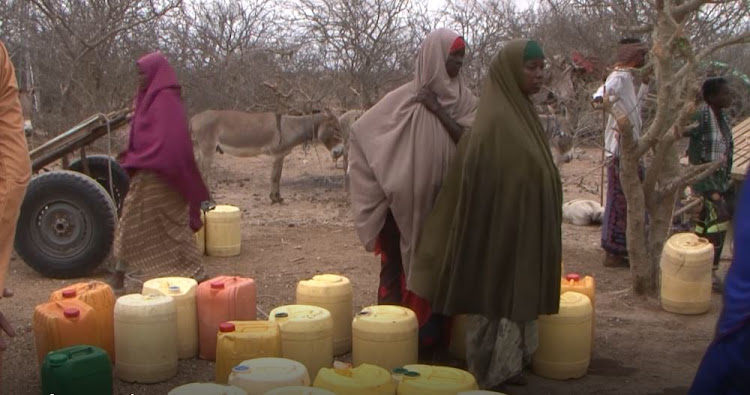 WATER CRISIS: Women look for water from a shallow well 10km out of Modogashe town on Saturday.
Image: STEPHEN ASTARIKO

Water scarcity is a growing problem with one in four people living in water-scarce areas.

According to the report released by the bank, the global crisis is accelerating with water demand expected to outstrip supply by 40 per cent by 2030 adversely affecting poor and vulnerable people. This will create growth inequality.

Access to safe water is critical to the health of families in Kenya and the global community.

It propels them to prepare and protect themselves from diseases to maintain a healthy productive nation that will boost growth and development.

Kenya with a population of over 50 million, 15 per cent of population relies on unimproved water sources such as ponds, shallow wells and rivers.

On the other hand, 41 per cent of Kenyans lack access to basic sanitation solutions and these cases are especially evident in rural areas and urban slums where people are often unable to connect to piped water infrastructure.

According to Reckitt,  environmental factors are driving Kenya into greater water stress levels, either through deforestation and drought expansion making the environment a big contributor to poor access to water and sanitation.

A report by Water.org shows that the country’s average total coping costs for an unreliable or distant water supply is approximately $38 (Sh 4500) per month.

In comparison, the report further notes that the average water bill of a typical household in Nairobi that is connected to a piped system is about Sh 550 per month.

This highlights the economic burden that often falls more heavily on unconnected rural customers than on households with piped connections.

More reports show that 21 million Kenyans have no access to safe and clean water and sanitation, estimated to cost the country Sh27 billion annually.

“However, there are many areas where piped water connections do not produce a reliable, constant flow of water. Therefore, solutions like borehole wells and rainwater harvesting tanks are also needed in urban and peri-urban areas,” the report says in part.

The country has had several efforts in trying to curb the crisis ranging from household lending to loan offerings to Small and Medium Enterprises (SMEs).

There also have been interventions to build the bankability of water utilities through technical assistance and improved financial management.

Nevertheless, World Bank advocates that to achieve a water-secure nation and world at large, there is a need for policy actions and investments at all levels.

“Given that water is at the heart of development, it is crucial that a wide range of perspectives be represented in policies. Well-designed governance and fiscal reforms, along with autonomous and accountable institutions, are key to improving the management of water resources,” the lender says.

Noting that water security is far from being realized in many countries, with an estimate of $150 billion(Sh8 trillion) needed each year to deliver universal safe water and sanitation globally, there is a need for a call to action.

Institutions and systems, therefore, are further urged to use and manage water efficiently, cost-effectively and transparently to ensure water is effectively managed and fairly allocated to avoid disputes.

This would be important in managing transboundary waters amid the increasing pressure on common sources of water supply.

Good governance is also vital for achieving the Sustainable Development Goals beyond clean water and sanitation for all. This is through reducing poverty and increasing food security.

The rise in droughts, floods and other water-related hazards, overexploitation and pollution of groundwater, are events that will undermine development gains, to revert this, the lender reiterates further investments in the water sector.

The scale of investment needed requires the involvement of the private sector and innovative financing mechanisms to complement limited government resources.

It would in turn transform the efficiency and build resilience in water-dependent sectors such as agriculture and energy.

The lender also calls for inclusivity where women, youth, indigenous groups, people with disabilities and others who are still underrepresented make decisions on matters dealing with water resources.

“They also need to have access to the systems and get job opportunities in the water sector,” the lender says.

Women's inclusion has been specifically emphasised as it has wide-ranging benefits which include improving the transparency and sustainability of water management.

Generally, all citizen engagement and accountability at all levels can help communities avoid being located in the flood plain and improve the effectiveness of disaster early-warning systems.

Governments, businesses and civil society should involve in sectorial innovation and problem solving as a whole to overcome the world’s water challenges.

Conserving our water sources will ensure there is a constant flow of water and maintenance of base flows in our rivers during droughts.
Opinion
1 month ago

The UN projects that by 2050 and at current trends, one in four people will have scarcity of clean water access.
Business
1 year ago

This at a time when hand-washing is a key practice required to safeguard individuals from contracting the virus
Business
2 years ago
Post a comment
WATCH: The latest videos from the Star
by ALFRED ONYANGO
Business
04 September 2022 - 21:00
Read The E-Paper