The terminal which has taken 44 months to be completed. 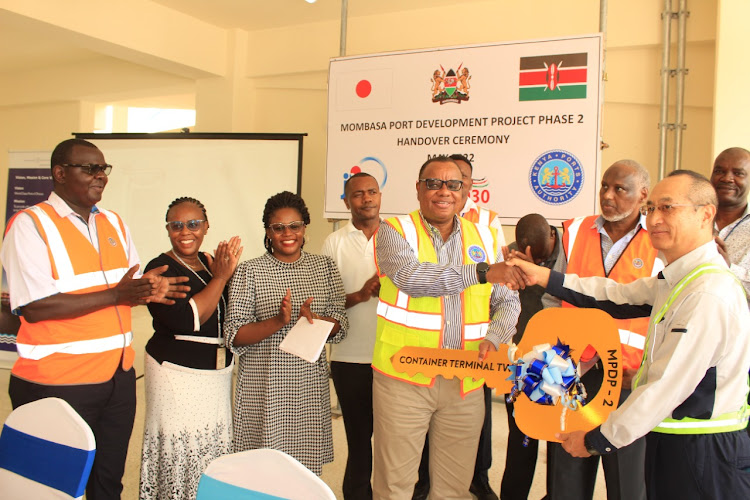 Phase II of the second container terminal at the port of Mombasa has officially been handed over to the Kenya Ports Authority management.

The terminal, with an additional 450,000 Twenty-Foot Equivalent Units (TEUs), has taken 44 months to be completed.

It was constructed on a reclaimed area of approximately 17.5 hectares and completed in three packages.

The construction of the terminal was done in three packages.

The first package involved the construction of the 300-meter-long berth number 22.

It is capable of handling Panamax and Post-Panamax ships, a container terminal with an additional capacity of 450,000 TEUs, port terminal buildings, and the Kipevu Clinic.

Package 3 involved the installation of an integrated Port and Terminal Security system.

One STS and 12 RTGs were delivered and commissioned in Phase 1 of the project and are currently in use.

Three additional STGs were delivered in January this year and are currently being commissioned.

The project, which was started in September 2018 by a Japanese contractor - Toyo Construction Company, was handed to KPA acting managing director John Mwangemi on Tuesday afternoon.

The first phase of the three-phased project, completed in 2016 and commissioned for operations in September 2016, increased the port’s annual capacity by 550,000 Twenty-Foot Equivalent Units (TEUs).

Mwangemi said with the completion of the new terminal, the capacity of the port of Mombasa is set to increase to a total of 2.1 million TEUs annually.

Speaking on Tuesday during the project handover ceremony, Mwangemi said with the increased capacity, the port of Mombasa will continue to be among the top five ports in Africa.

“I wish to commit here that we shall put our best foot forward to ensure optimal utilization of this facility for the benefit of Kenya and the region,” he said.

KPA is yet to decide on who will run the new terminal, despite reports that a private company is bidding to be allowed to run the new facility.

President Uhuru Kenyatta is expected to visit Mombasa for the official commissioning of the second container terminal before leaving the office in August.

KPA’s General Manager Infrastructure Development Eng. Abdullahi Samatar said with the completion of the project, KPA had achieved its target of expanding capacity ahead of demand.

He said the period between commencement and completion of the project on September 1, 2018, and May 31, 2022, was an eventful journey presented with a few notable challenges.

“Some notable challenges encountered included the stakeholder environmental concerns and the outbreak of the novel COVID-19 pandemic, both of which threatened either prolonged suspension of the project or even potential termination of the contract," he added.

The Project Manager said it was through joint resilience and collaboration by the parties as well as the professional intervention and direction by the engineer and the consultant that they were able to overcome all the hurdles.

Raila’s manifesto has nothing for Coast region, says Omar

European Commission said this would make life easier for consumers and save them money
Sasa
2 weeks ago
WATCH: The latest videos from the Star
by CHARLES MGHENYI Chief Correspondent, Coast Region
Business
09 June 2022 - 01:48