The bank’s earnings rose from Sh8.72 billion recorded in a similar quarter in 2021.

•The bank’s earnings rose from Sh8.72 billion recorded in a similar quarter in 2021. 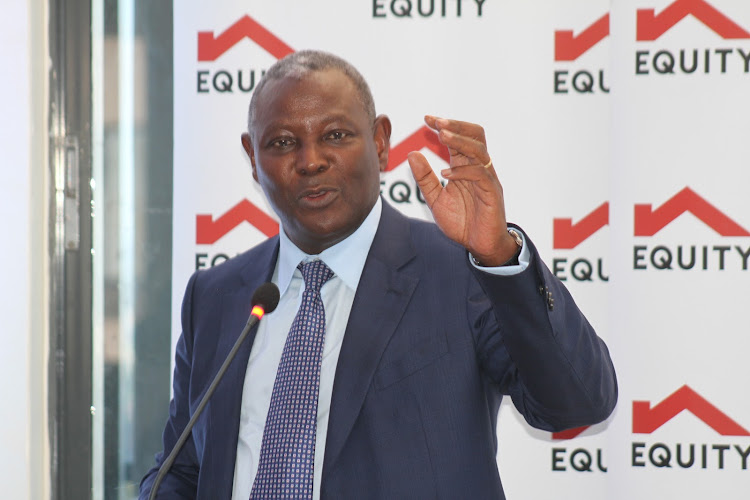 Equity Holding's net earnings for the first three months of the year rose by 36 per cent to Sh18.9 billion on the back of strong growth in both interest and non-interest income.

This was an improvement compared to the Sh8.72 billion reported in the same period last year.

has raised Equity Group's net profit for the first three months to March by 36 per cent to Sh11.86 billion.

Operating income grew by 21 per cent to Sh30.9 billion up from Sh25.5 billion with non-funded income constituting 37.2 per cent of the operating income.

Cash and cash equivalents declined by 31 per cent from Sh241 billion down to Sh166.4 billion as the Group resumed aggressive lending.

Asset reallocation from cash and cash equivalents to interest-earning assets resulted in net interest income growth of 31 per cent to Sh19.4 billion up from Sh14.8 billion with a yield on earning assets growing to 9.5 per cent up from 8.9 per cent.

Regional subsidiaries continued to gain market share with their total revenue contribution to the Group growing to 40 per cent (Sh12.8 billion) up from 37 per cent (Sh9.6 billion).

This is despite the asset reallocation liquidity marginally declining to 56.9 per cent down from 60.6 per cent which reflects the size of headroom and the opportunity for continued optimization of assets allocation and loan growth.

“The first quarter of 2022 is a demonstration of the strategy Equity is executing which is developmental. We want to use the Group to transform East and Central Africa and eventually the rest of Africa,” he said.

The lender this week announced its partnership with IFC the private sector arm of the World Bank, African Development Bank and 10 European Development Banks to syndicate and finance the primary sectors of agriculture and mining, the manufacturing sector and trade and investment