The sector would have received at least Sh330 billion out of the Sh3.3 trillion budget for the upcoming financial year.

•The civil society questioned why Uhuru would agree to a Sh212.5 billion budget for infrastructure while the food sector suffers.

•The sector would have received at least Sh330 billion out of the Sh3.3 trillion budget for the upcoming financial year.

Kenya's civil society has faulted the government for the low budgetary allocation for agriculture in the 2022/23 budget. 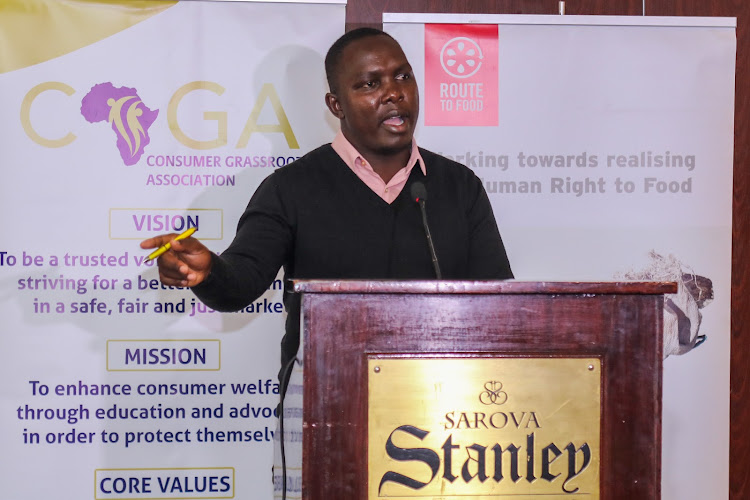 Route to Food initiative Emanuel Atamba at Sarova Stanely, Nairobi during a press briefing on the ongoing drought situation in the country./WILFRED NYANGARESI

Kenya's civil society has faulted government for the low budgetary allocation for agriculture in the 2022/23 budget.

The National Treasury has set aside Sh46 billion for agriculture despite the sector contributing 25 per cent of Kenya's Gross domestic product (GDP).

This is a cutback from the current year's allocation of Sh60 billion, raising concerns as 70 per cent of Kensya's population relies on the sector for survival.

"We cannot continue denying the agricultural sector and food-related sectors funds, at the expense of sectors like infrastructure,"Route to Food Programme Coordinator Emmanuel Atamba saidat a press conference on Wednesday.

In the 2022/23 budget presented in the National Assembly last week, a paltry 1.39 per cent was allocated to agriculture despite the Kenyan government being a signatory to the Maputo Declaration committing to allocate at least 10 per cent of its budget to agriculture.

If Kenya applied its commitment in the declaration, the sector should have received at least Sh330 billion out of the Sh3.3 trillion budget.

Food security is a crucial part of President Uhuru Kenyatta's legacy under the Big Four Agenda alongside affordable housing, manufacturing and Universal Healthcare.

The civil society questioned why he would agree to a Sh212.5 billion budget for infrastructure while the food sector suffers.

The chronic hunger in the country that has now affected over 3.5 million people in Arid and Semi-Arid Lands (ASAL) in Kenya according to the latest Integrated Food Security Classification analysis.

The population affected are in Baringo, Garissa, Isiolo, Mandera, Marsabit, Tana River, Turkana and Wajir. These are regions with predominantly pastoral livelihoods.

On September 8,2021, the government  declared drought a national disaster and instructed the Treasury and the Interior ministry to spearhead  efforts to assist affected households.

However, the civil society including Rural Outreach Africa (ROA), Kenya Parliamentary Human Rights Association (KEPHRA) and Consumers Grassroot Association (CGA) claim no money has been received by the affected people to date.