Kenya has been keen to have her neighbour use its new infrastructure.

•Uganda accounts for 83.2 per cent of transit cargo through the port of Mombasa.

•South Sudan takes up 9.9 per cent while DR Congo, Tanzania and Rwanda account for 7.2 per cent, 3.2 per cent and 2.4 per cent respectively. 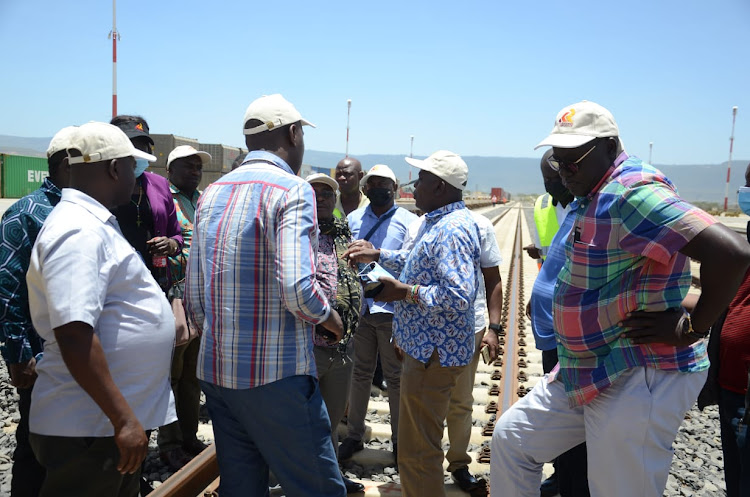 Kenya Railways managing director Philip Mainga accompanied by Uganda government officials lead by minister of state for finance Henry Musasizi during a tour of the Naivasha ICD where they witnessed transhipment of cargo from SGR line to MGR line for onward transportation to Uganda through Malaba./ DOUGLAS OKIDDY

The Ugandan government has started warming up to the Standard Gauge Railway following the exposure of how it works.

The Chair of the Committee Keefa Kiwanuka and deputy chairperson Avur Jane Pacuto were present.

At the Naivasha ICD, the delegation was keen to learn how goods were being moved seamlessly from SGR to MGR for onward transmission to Malaba then Uganda.

“We decided to do a visit to Kenya particularly to appreciate how the movement of our goods along the Northern Corridor is. We did our visit in Mombasa at the Kenya Ports Authority and now we are here,” Musasizi said.

Kenya and Uganda in May last year joined forces to rehabilitate the old meter-gauge railway as a means of enhancing the seamless movement of goods.

The Kenyan government has since revamped its metre gauge line from Naivasha to Malaba, a move that was followed by the launch of passenger service in December.

Uganda has been reluctant to use the Naivasha Inland Container Depot as its key transit cargo handling facility despite Kenya's push to relocate operations from Mombasa and Nairobi.

The Naivasha facility comprises over 1,000 acres of space with a marshalling area able to hold 700 trucks at any given time.

The neighbouring country has preferred to continue picking their cargo from Mombasa.

Uganda accounts for 83.2 per cent of transit cargo through the port of Mombasa.

Musasizi said the Ugandan government is looking at a collaborative mechanism among the EAC partner states on how to facilitate trade.

“Kenya has aggressive efforts to develop infrastructure along the Northern Corridor from Mombasa up to Malaba. As a partner in the EAC, we need to collaborate on how this can also be improved on the Ugandan side so that we are able to facilitate trade better,” he said.

Musasizi said they have had long term challenges in terms of the cost of doing business with the major driver being the cost of transport.

The Ugandan Minister said they believe that there is a need for massive infrastructure development in railway, road, air and water to bring the cost of doing business down.

He said they appreciate the Kenyan government for the decisive efforts it has taken so far noting that some progress has been made on the Ugandan side.

“We are currently involved in the rehabilitation of our meter gauge railway and in the medium term, we also intend to do the Standard Gauge Railway. All these are efforts which are aimed at facilitating business,” he said.

Musasizi said what Uganda needs at the moment is the reconstruction and rehabilitation of the Meter Gauge Railway but added that resources for SGR have also been provided for.

He said rehabilitation works on the 260-km Malaba-Kampala metre gauge line will go on.

Musasizi however failed to disclose how much has been set aside for SGR only saying that it is planned for the medium-term.

“We think it should not take a long time but I cannot tell you it is tomorrow or any other day,” Musasizi said.

At Naivasha, the delegation witnessed transhipment of cargo from SGR line to MGR line for onward transportation to Uganda through Malaba.

Mainga said a new crane has been acquired and is set to hasten the process of loading and offloading of goods.

The MD said moving goods through SGR and MGR has helped reduce the turnaround time, a move that has reduced the cost of doing business.

Kiwanuka said: "It has been an overwhelming experience to see what our sister countries are doing, the nature of the infrastructure that they have developed in order to enable the facilitation of trade."

He said the committee will the Ministry of Finance and other stakeholders, including transport, and see how they can fast track infrastructure development in Uganda, to enhance cargo movement and trade in the region. 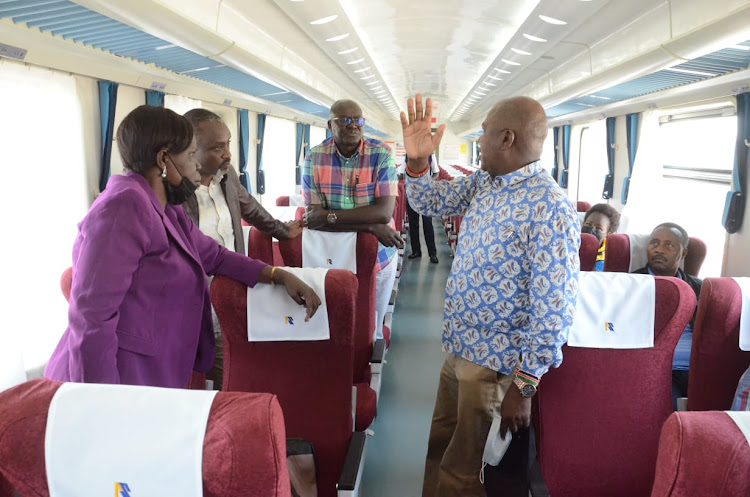 Kenya Railways managing director Philip Mainga accompanied by Uganda government officials lead by minister of state for finance Henry Musasizi during a tour of the Naivasha ICD where they witnessed transhipment of cargo from SGR line to MGR line for onward transportation to Uganda through Malaba./ DOUGLAS OKIDDY
Post a comment
WATCH: The latest videos from the Star
by GILBERT KOECH News Reporter
Business
14 March 2022 - 04:00
Read The E-Paper