•The campaign seeks to entice East Africans to travel in their specific countries and around the region. 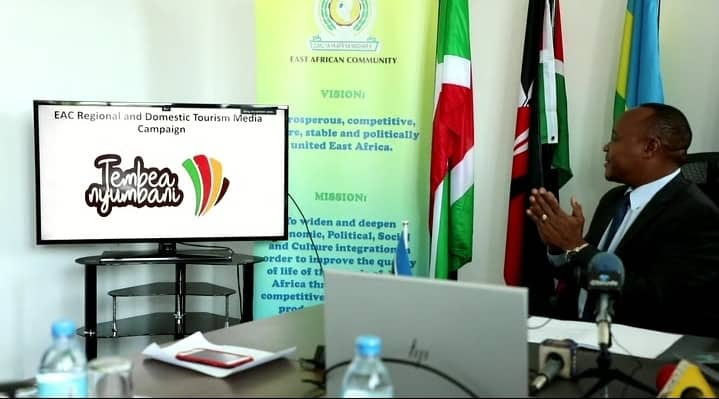 The campaign seeks to entice East Africans to travel in their specific countries and around the region, in an effort to revive domestic and regional tourism across the region, amid the pandemic.

As part of implementation of the EAC Tourism Marketing Strategy by the German Development Agency, GIZ, the campaign will run for three weeks, from  December 1.

Tourism contributes significantly to the economies of EAC Partner States and pre-pandemic contributed 10 percent of Gross Domestic Product (GDP), 17 per cent export earnings, and 7 per cent in jobs creation.

The Covid-19 pandemic saw the sector affected negatively with international tourism arrivals in East Africa dropping by about 67.7 per cent, to an estimated 2.25 million arrivals in 2020 compared to 6.98 million in 2019.

Speaking on Wednesday during the media launch held at the EAC headquarters in Arusha, Tanzania, EAC Secretary General Peter Mathuki urged tourism private sector players to extend affordable packages to East Africans so as to entice them into taking advantage of the holiday offers available during the upcoming festive season.

“With preferential entry fees and rates now extended to EAC citizens, it is timely for East Africans to explore the diverse cultures, take on adventure safaris and visit exotic beaches amongst other opportunities the region has to offer.”

Mathuki further noted that EAC has developed an EAC Pass that integrates and validates Covid-19 tests and vaccination certificates for EAC Partner States to ease entry across the region.

The Tembea Nyumbani campaign is being undertaken by the EAC in collaboration with the East African Tourism Platform that represents the tourism businesses across the region.

Through the campaign, hoteliers and other tourism service providers are being encouraged to promote affordable packages to the EAC citizens.

EAC Director in charge of Productive Sectors, Jean Baptiste Havugimana noted that the EAC is making strides in ensuring the Single Tourist Visa is adopted by all EAC Partner States.

“The Sectoral Council on Tourism and Wildlife Management during their Extra-ordinary meeting held on July 15 2021 recommended that the Secretariat convene a multisectoral meeting comprising key sectors such as Tourism and Wildlife to develop a framework for the introduction of the Single Tourist Visa by all the Partner States,” he said.

Havugimana noted that the meeting will be convened in early 2022, adding that once fully adopted the Visa will ease travel by foreign tourists across the entire region.

EAC Principal Tourism Officer, Simon Kiarie, noted that EAC projects that with aggressive tourism efforts both at the regional and national levels, the region will be able to receive about 4 million tourists in 2022.

“The tourism sector’s recovery has been on an upward trajectory and we expect that by the year 2024, we will receive about 7 million tourists compared to 2.25 million tourists recorded in 2020,” he noted.