Uhuru said Tanzanians are free to do business in Kenya without work permits.

• On March 5, 2021, the government through the Agriculture and Food Authority stopped the importation of maize from Uganda and Tanzania. 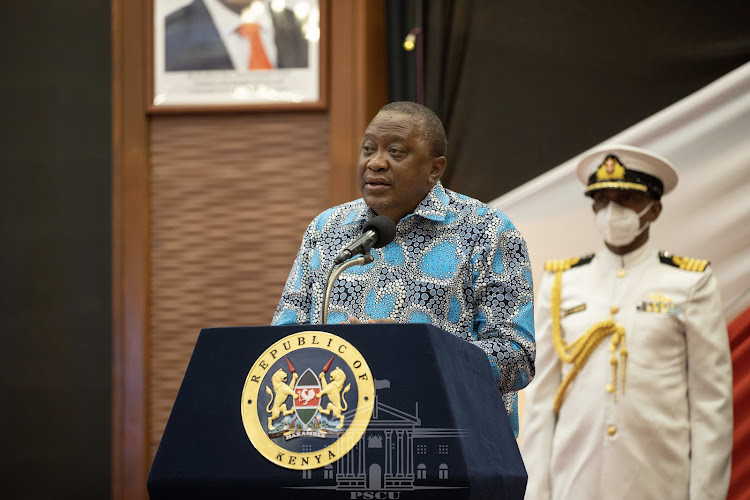 President Uhuru Kenyatta addressing business leaders from Kenya and Tanzania in Nairobi on May 5, 2021.
Image: PSCU

Agriculture CS Peter Munya has been given 14 days to lift the ban on the importation of maize from Uganda and Tanzania.

This is a directive from President Uhuru Kenyatta following the move to remove trade barriers in the East African Community.

The President made his remarks on Wednesday in Nairobi during a business forum meeting that brought business leaders from Kenya and Tanzania.

The meeting was also attended by President Samia Suluhu of Tanzania who is on a two-day state visit to Kenya.

“On the maize that has been laying on the border points, I am giving you the CS (Peter Munya) two weeks to solve the issue. There is no need to hurt our people,” Uhuru said.

On March 5, 2021, the government through the Agriculture and Food Authority stopped the importation of maize from Uganda and Tanzania.

Munya had said that the move was due to the high levels of aflatoxin in maize coming from the two countries.

“Nobody has banned the importation of maize because you cannot ban trading in East Africa, but we must ensure that standards that are already recognised in our protocols are observed,” Munya’s words on the ban of maize importation.

The president added that Tanzanian citizens who are running businesses in the country are free to do business in Kenya without work permits and other immigration documents.

Uhuru added that the prosperity of Kenya and Tanzania hinges on creating a conducive business environment.