Trade experts worry of state's tactics in trade with China

•Kenya-China trade experts have raised concerns over trends and negotiation deals in trade between the two countries.

•In an event by a private sector development think-tank, Kenya Business Guide (KBG), Oscar Otele has cast doubts on the merits Kenya is gaining from the relations. 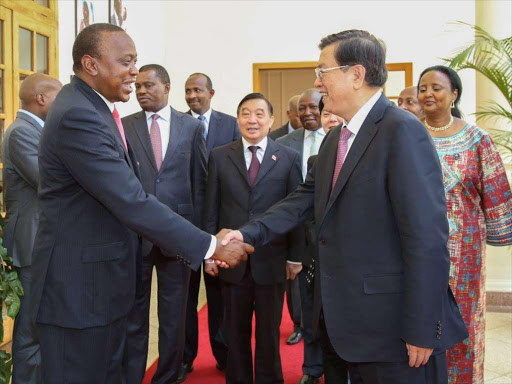 President Uhuru Kenyatta with Chinese Government officials led by, Zhang Dejiang, the Chairman of the Standing Committee of the National People's Congress of China on Thursday at State house Nairobi.Photo PSCU

Kenya-China trade experts have raised concerns over trends and negotiation deals in trade between the two countries.

In an event by a private sector development think-tank, Kenya Business Guide (KBG), Oscar Otele cast doubts on the merits Kenya is gaining from relations with China.

He said the patterns have led to increased trade imbalance which has been favour of the Asian nation.

This was a slight improvement on the Kenyan side as exports to China grew from Sh9.99 billion in 2017 while imports declined from Sh390.62 billion.

Kenya is considered one of China's biggest trading partners in Africa, especially through the importation of materials used in construction of the Standard Gauge Railway. China is also Kenya's largest bilateral creditor.

“The negotiation tactics the Kenyan government deployed to ensure that Kenya got a fair share of trade benefits are still not clear,” Otele said during the release of Kenya-China Relations working series brief.

The imbalance drags over the years despite the government putting initiatives to reduce the trade deficit.

The meetings have since yielded agreements including permission to export avocado to the Asian state, a deal giving access to the market of more than 1.4 billion consumers and absorbing 40 per cent of Kenya's produce.

Other deals have been struck to increase Kenya's exports to China including hides, skins, coffee, tea, titanium ores, and plastics.

As of April, Kenya’s external debt stood at Sh2.61 trillion with China contributing over 20 per cent of the foreign loans valued at Sh634.4 billion.

“The Kenya-China trade relations is not a question of who gets a fair trade deal but is a matter of who exploits the opportunities better than the other,” Hangwei Li, a London-based expert said.

“At the moment China seems to have found the right spot, if Kenya finds the right trade channels then tables will be turned upside down.”

The Kenya-China Working series is expected to involve stakeholders in the business activities involved in both nations.

"There is a need to carry out an evaluation to measure the impact of this trade influx on Kenyans," KBG noted.

This is likely to limit existing mistrust between importers from Africa and suppliers in China
Business
1 year ago
by SUSAN NYAWIRA AND ELIZABETH KIVUVA
Business
08 August 2019 - 00:00