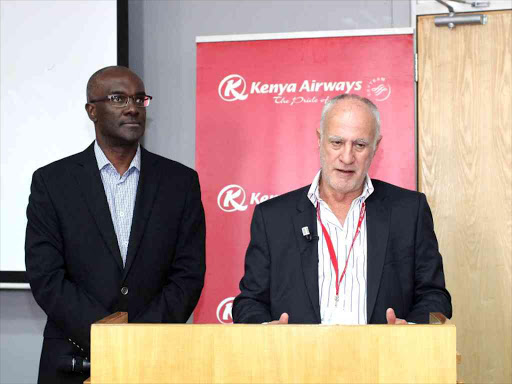 New chairman Michael Joseph said this on Friday noting Ngunze has played the vital role of balancing the airline's books for more than five years.

“I have discussed this with the unions and they understand the situation that we are in. They have given us the necessary time to go through restructuring,” Joseph told a media briefing on Friday.

The Kenya Airline Pilots Association had been pushing for the resignation of Ngunze and former chairman Dennis Awori since April.

The call intensified after the airline encountered hitches that forced the delay of flights. The union accused Ngunze and his team of being unable to get the airline out of its financial woes.

and Joseph appointed to replace him late in October.

The change also led the pilots union to call off a planned strike which had been deferred amid negotiations.

Through the Operation Pride restructuring strategy rolled out late last year, Kenya Airways has so far has so far sold off some of its assets, including land and planes.

In March, the national carrier sold its prime landing slot in Heathrow London at Sh5.3 billion, and 30 acres of land in Embakasi, Nairobi.

rolled out plans to retrench 600 workers starting May, four years after firing 400, in an exercise aimed at cutting operational costs as part of turnaround efforts.

Ngunze said the process was slowed as the airline is restructuring; he said less less than 100 employees have been relieved of the duties.

“The 600 identified for retrenchment were meant to cover retrenchment and redeployment,” he said, noting the plan has also been under review.

we might see a change in the number of retrenchments.”

Ngunze said the loss reduction was underpinned by an increase of passenger numbers by 89,000 to 2.2 million.

It was also attributed to lower operating costs made possible by fleet rationalisation in line with the ‘Operation Pride’ recovery strategy.

“The business is taking steps in the right direction,” he told an investor briefing.

Joseph said: “Operation Pride is showing positive results and I am personally determined to restore the Kenya Airways brand to its rightful place."