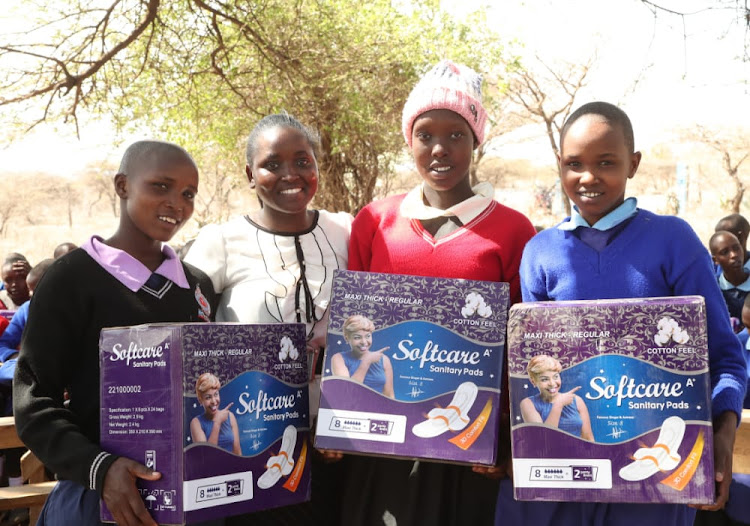 More than 400 girls from four primary schools in Kajiado can now afford a smile after they were supplied with free sanitary pads in an initiative targeting teens in the area.

The initiative, spearheaded by a non-governmental organization, seek to put a smile on the faces of schoolgirls as they cope with the menstruation cycles which have often subjected them to shame and ridicule.

Anacleter Marisim, Manager at the Kibos International Health Foundation said the move seeks to help the girls who are at times forced to seek help from men who instead take advantage of them.

“Many of our young girls undergo serious challenges during such moments and at times forced to seek help from people who instead turn against them,” said Marisim.

She pointed out that the organization is committed to educating young girls more on menstrual health management.

“Menstrual health education remains an urgent topic that needs concerted efforts by the government and NGOs among other development partners,” said Marisim.

She said many girls, especially from marginalized groups, miss school while they are on their periods because they have no proper way to manage hygiene.

She noted that Kibos Foundation aims to contribute to Kenya’s goals of establishing sustainable, integrated health systems that can address the country’s major health challenges both in communicable and non-communicable diseases.

“Kibos International Health Foundation is committed to joining hands with the government and other NGOs in addressing challenges facing young girls, especially those in marginalized areas,” said Marisim.

She said many girls are missing and dropping out of school due to a lack of sanitary towels.

“For the government to achieve Vision 2030, it needs to ensure girls, especially from marginalized counties, attend school fully. It’s through education that the much-needed development in every community can be realized,” she said.

Many parents support education but lack of sanitary towels will demoralize girls from furthering their studies because of discomfort and embarrassment," she said.

She called on other stakeholders to help in retaining girls in school.

Area Senior Chief Daniel ole Kintalel noted that young girls from the Maa community need awareness as many of them are still out of school due to early marriages, teenage pregnancies, and lack of sanitary towels among other traditional practices.

“Many parents from marginalized counties do not value pads as a basic need. As leaders we need to educate parents so girls can compete with boys on a level playing field," he said.

He called on all leaders to fight backward cultural practices that hinder girls from accessing quality education.

They are asking for online signatures to get Parliament to act immediately
News
2 months ago
Post a comment
WATCH: The latest videos from the Star
by FELIX KIPKEMOI Political Reporter
WomenWork
06 October 2022 - 17:25
Read The E-Paper