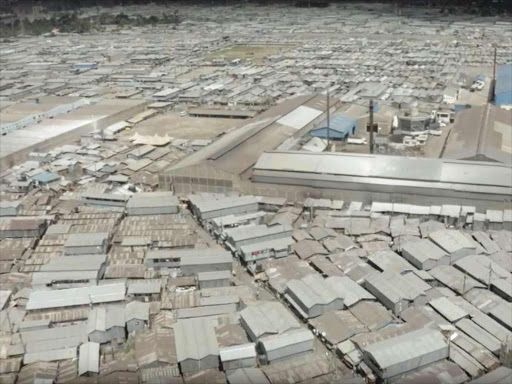 As we wait to be let into Maendeleo Learning Centre, smoke drifts over from the chimney of a factory next door. The smoke engulfs the school’s bare fields and pollutes the classrooms, where the last lesson of the day is in progress.

Whether inside or outside class, the children and teachers have no way of escaping the smoke and the white ‘dust’ particles that settle everywhere, causing a burning itch to the skin.

“What can we do? They need to finish their syllabuses before the school year ends,” a teacher says.

Oblivious to the smoke and dusk, some of the children play in the dusty playground. Others walk to the toilet blocks, which share a wall with the factory and bear the brunt of the fumes emitting from the factory.

The school in Mukuru kwa Reuben slum, off Enterprise Road, has 275 pupils, ranging from baby class to high school. It is nestled in between two factories: Bhachu Industries Limited and its subsidiary, Accurate Steel Mills.

Residents have time and again complained to the authorities about the noxious air coming from the factories.

Lucas Maina, who has lived in Kwa Reuben for 28 years, says he and other residents are worried about their health and that of their children. They have no option but to stay in the settlement.

“I have worked for Bhachu in the past. At the end of the day you have to put food on the table. If you complain about your welfare, the following day you can’t step foot near the factory. So you just keep quiet,” he says.

Mwende (not her real name) says she has lived in Kwa Reuben for eight years. She worries for her two children, and especially about her husband, who works for Bhachu.

“He struggles to breathe,” she says, adding: “He suffers from a congested chest, and this has been getting worse over the years. Our hands are tied because that is where we get our daily bread.”

Elijah Gachuki is the CEO at Mukuru Kwa Reuben Clinic. He sees up to 40 patients a day on average, all with respiratory tract infections and ailments. Gachuki attributes the poor health outcomes of the community to the large volumes of pollution from gases emitted by nearby industries.

Talking to the Star, he said, “Most of the patients we see have upper and lower respiratory tract infections. In some cases, they complain of severe chest pain. We are usually unable to deal with the more extreme of these cases, so many are referred to Mama Lucy Hospital, Mbagathi District Hospital and Kenyatta National Hospital.”

Gachuki blames most of the respiratory tract infections on allergies caused by gas and dust emissions. “Currently we have about 60 asthmatic patients monthly at our TB clinic,” he says.

He says the factory has yet to come up with proper waste disposal mechanisms to stop the dust and gas emissions from continuing to endanger the lives of the community, and particularly children.

“For us to guarantee these young ones a brighter future, we need to seriously look at how to mitigate this air pollution,” Gachuki says.

An article in the

highlights the effects of air pollution on people’s intelligence. The article, based on research conducted in China, found that high pollution levels led to significant drops in test scores in language and arithmetic, with the average impact being having lost a year of the person’s education.

Other reported studies have linked toxic air to extremely high mortality in people with mental disorders, while another analysis found that people living near busy roads had an increased risk of dementia.

Apart from studies that have shown air pollution to cause premature deaths globally, scientists have found the first evidence that particles of air pollution travel through the lungs of pregnant women’s lungs and lodge in their placentas. This in a study conducted in London, UK, involving mothers living in the city.

Following the complaints, the Star, in partnership with Code for Africa, set out to set up air quality sensors in the Kwa Reuben village to measure the quality of the air residents were being exposed to.

The residents are also able to use the readings from the sensors to advocate measures to improve the air quality. The sensors.AFRICA project was set up in Mukuru Kwa Reuben at Reuben FM, 330 meters from Accurate Steel Mills, a subsidiary of Bhachu Industries Limited.

The readings from 330m away were high, and we were there to see what the sensors would tell us about pollution closer to the factories.

The data collected by the air quality sensors confirmed the residents’ claims that the factories regularly release emissions between 2pm and 6pm. Using the World Health Organisation’s Air Quality guidelines, the data showed that over a seven-day period with data collected over 24hrs, residents living around the sensor at Reuben FM were seeing Particulate Matter (PM) 10 values higher than the WHO-recommended levels over a 24-hour period, four days of the week.

The values were so high, despite being over a quarter of a kilometre away from the factory. The Code for Arica team went on walkabout to take readings with a portable sensor closer to the factory.

Our first reading at Maendeleo Learning Centre at 2.59pm was 266 μg/m3

for PM 10, well above WHO air quality standards. The factory with the chimney emitting to the right of the school was identified as Divani, but that could not be substantiated. Its chimney is visibly lower than the prescribed Nema guidelines, which is 40-50m high from the tallest building in the neighbourhood.

Of the two factories highlighted as major pollutants in the

The factory, which has been in operation since 1997, coexisted with the residents until mid-2016. Speaking to the Star, Karen*

(who did not want her real name used) said the factory did not have the levels of pollution it emits today.

“They were okay. The chimneys took the air up high into the air. But now the smoke comes down through gaps in the factory’s wall, between corrugated sheets and the stone wall,” she said.

Karen showed us into her home, which is directly in the shadow of Accurate Steel. “The smoke is very heavy at certain times, and is accompanied with a white powder that settles on all surfaces and seems corrosive to metal. The factory has chimneys but the emissions are seen to seep through the corrugated iron top sheets of the factory’s wall,” she said.

Steel production and treatment processes have been shown to have significant impact on the natural environment. The major releases of pollutants to air and water include carbon dioxide and nitrogen oxides and sulphur dioxide.

Dust is formed in most of the steel industry’s processes. The particles from the nitrogen and sulphur oxides are smaller than 2.5 micrograms. They are easily inhaled into the lungs and absorbed directly into the bloodstream.

An environment expert at the National clean air production Evans Nangulu said following latest assessments of the Bhachu factory, they had directed the company to raise its chimneys from 20m to at least 50m to increase the dispersion rate of the waste gases.

Additional recommendations include: installing fabric filters to reduce emission of fine dust particles, using electrostatic precipitators that can tremendously minimise the emissions of sulphur and nitrogen oxides and carbon dioxide.

On how these regulations are being enforced, Nangulu said: “The main challenge is that we have so many papers on policies and regulations in place, but enforcement and enactment remains a nightmare. When you go to the ground, you realise very little is being done.”

Adding: “Enforcing these regulations is not a one-off idea. It should be continuous, and if those in charge can tighten their ends to ensure both developers and factories follow the law, we can reduce the unfortunate situation that the people in Kwa Reuben find themselves in.”

Nangulu urged factories to adopt modern technologies to help them manage their emissions.

The article was done with the support of Code for Africa’s sensors, Africa project and africanDrone.

Post a comment
WATCH: The latest videos from the Star
by PATRICK VIDIJA Investigative Journalist
Watchdog
07 November 2018 - 00:15
Read The E-Paper