Ahoya will have Nancy Kawira and Natasha Stacey for the week-long competition where they will meet other regional winners from across the continent.

•Ahoya said the rest of the squad will not be resting on their laurels despite winning the East Africa regional tournament  Rwanda in April. 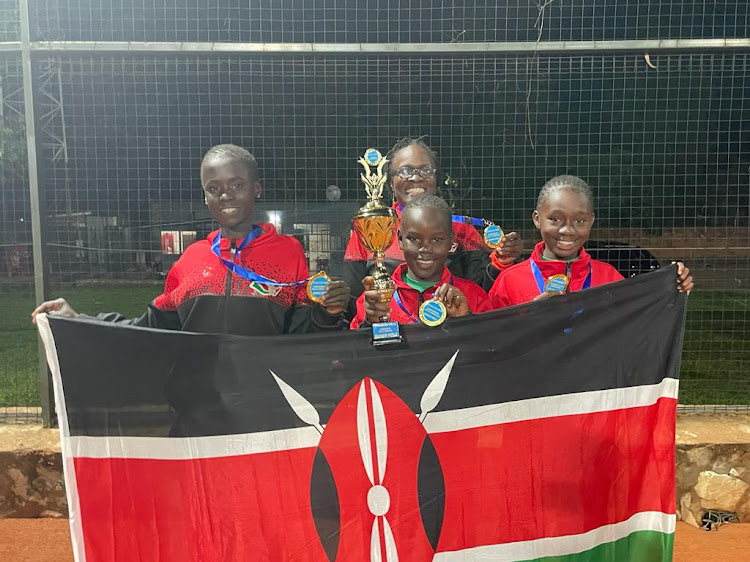 Seline Ahoya flanked by Nancy Kawira and Veronica Osogo with the trophy and medals during the East Africa under 12 championships
Image: HANDOUT

Seline Ahoya will lead Kenya Under-12 tennis team to the Africa Championship scheduled for October 12-13 in Mozambique.

Ahoya will have Nancy Kawira and Natasha Stacey for the company in the week-long competition. The Kenyans will be up against other regional winners from across the continent.

Ahoya featured in the Confederation of Africa Tennis (CAT) Under-12 tournament in Togo last week, where she lost in the second round.

Before traveling to Mozambique, Ahoya will be attempting to go on a good run in the next week's warm-up tournament in Madagascar.

“I believe I can go on a good run and get some matches under my belt,” added Ahoya.

Ahoya said playing in the tournament will be ideal as she faces the same competition in Mozambique.

“A good number of the players I will face during the Madagascar warm-up are most likely the same ones I will play against in Mozambique. Madagascar will give me an idea of what to expect in Maputo," Ahoya said.

She said she is currently using clay court surfaces to prepare for her assignments and she is confident of exceling under the same conditions in Madagascar.

“The tournaments I'm playing are clay court surface which is slower than hard court but I am adapting to it pretty well."

Ahoya said the rest of the squad will not be resting on their laurels either  despite winning the East Africa regional tournament in Rwanda in April.

“We are determined to perform even better than we did and we will not be complacent. We want to do the country proud,”added Ahoya.

Kawira and Stacey have started training for the event and Tennis Kenya administrator, Nancy Nduku, hopes they will carry the form from Rwanda tourney in April to the next assignment.

“The girls have gained confidence by playing in the event in Rwanda and winning the Madagascar show will give them an edge when we go to Mozambique," added Nduku.

Okutoyi also received a shot in the arm with 30 universities in the United States expressing an interest in her,
Sports
2 weeks ago

Okutoyi blew hot and cold in the second-round match, bouncing back from an initial 6-2 loss to claim the second set 7-6 before she eventually ...
News
3 weeks ago
Post a comment
WATCH: The latest videos from the Star
by WILLIAM NJUGUNA Senior Sports Writer
Tennis
16 September 2022 - 05:00
Read The E-Paper