Okutoyi to focus on singles category in US junior Open

Okutoyi said she wants to try her luck in singles despite her great win in doubles in Wimbledon last week.

•The US Junior Open will be played on hard court, which Okutoyi is familiar with,  having played at the Australian Open in January.

•"I am confident I have acclimatized to the surface and I will be relishing the challenge," —Okutoyi. 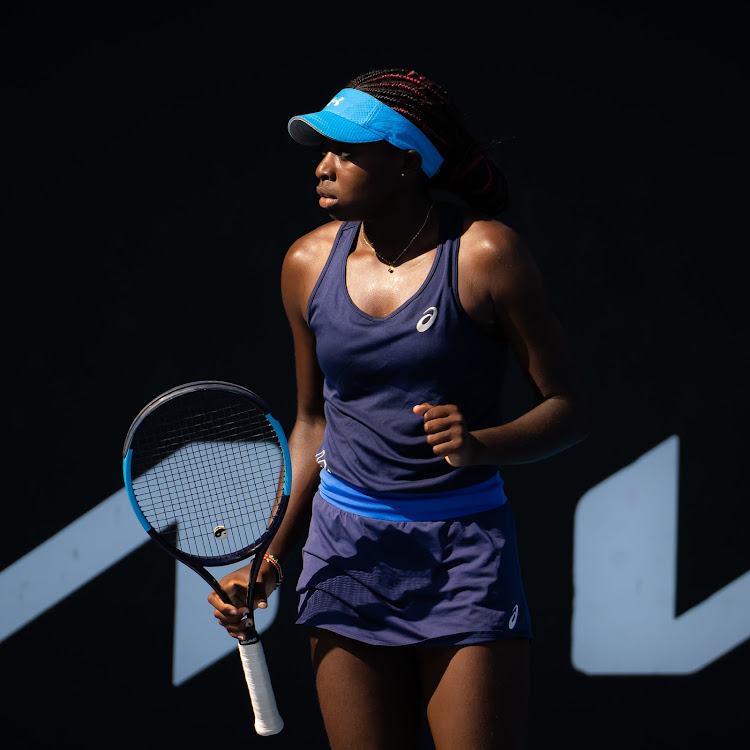 Wimbledon junior doubles champion Angela Okutoyi says she will focus on the singles category at the US Junior Open in September.

In an interview at Moi Stadium, Kasarani, Okutoyi said she wants to try her luck in singles despite her great win in doubles in Wimbledon last week.

‘‘It’s only in Wimbledon that I did not play in singles because I was not feeling well. At first, I did not know that I was good at doubles until I won Wimbledon. I believe what I did in the doubles is what I will do in singles," she said.

The US Junior Open will be played on hard court, which Okutoyi is familiar with,  having played at the Australian Open in January.

"I am confident I have acclimatized to the surface and I will be relishing the challenge," added Okutoyi.

The country's youngest Kenya Open champion will first play in two build-up tournaments in Monastir, Tunisia and Egypt next month in readiness for the US Junior Open

‘‘Now that I have gotten used to it, I have the courage that I will shine in whatever event comes my way," she said.

Okutoyi participated in the 2022 Australian Open, where she defeated Italian qualifier Federica Urgesi  6-4, 6-7 (5), and 6-3 in the first round. She continued her form against Australian qualifier Zara Larke  7-6, 5-7, 6-1 in the second round, winning in three sets.

She later lost in her third-round match against Serbian player Lola Radivojević 6-3, 6-2, but her performance made her the first Kenyan in the world to progress to the third round in a Grand Slam.

At Wimbledon, Okutoyi won the girls' doubles title with Rose Marie Nijkamp of the Netherlands beating Canadians Kayla Cross and Victoria Mboko 3-6, 6-4, 11-9 in the final.

The 18-year-old called on fellow tennis players and officials to fly the Kenyan flag high and emulate how Kenyan athletes have done the country proud since time immemorial.

‘‘Just like athletics is supported, we need the same support in tennis. I would also like to see other Kenyans out there winning. It’s sad that in a big draw of 64, you only see one Kenyan while in other countries, there are like five players," she noted.

‘‘I hope the government through the Ministry of Sports and well-wishers can come out and support us because that is what we lack, ’’she added.

The champion noted that the Wimbledon win was dedicated to her family and to everyone that has supported her ever since she was young.

‘‘Okutoyi is a girl who lives with her grandmother, having lost her mum while she was young. She has big dreams and she is always fighting and looking forward to winning as many Grand Slams as possible. The Wimbledon win was dedicated to my family and to everyone that had supported me ever since I was young,’’ he said.

She went on to discourage athletes againsdt doping since it will only lead to their downfall and end of careers.

"I hope people out there don’t dope. I have been tested multiple times and I have been negative. I hope to stay clean. Doping will only destroy you,’’ she said.

Okutoyi sets sights on US Open after triumphant arrival

As we speak, Okutoyi lacks a stable sponsor and merely depends on meager funds provided by Tennis Kenya.
Sports
2 months ago

Okutoyi was over the moon with her performance, especially after crashing out of the singles tournament in the first round.
Sports
2 months ago

Karanja will be hoping for a win in the final pool match against Albania on Thursday.
Sports
2 months ago

Cynthia Wanjala joined Owegi in the last eight by beating Norway's Sara Rydholt 5-7, 6-3 , 6-2 in a tough battle
Sports
3 months ago

"I played well but lost to a more experienced opponent. I have learnt my lessons and will want to bounce back and go all the way next time,” said ...
Sports
3 months ago

She had earlier beaten Great Britain's Given Roach 7-5, 6-4 in the second round having been handed a bye by the event organisers.
Sports
3 months ago

Okutoyi to play in two junior tourneys in readiness for Wimbledon

Okutoyi won her first-round match of the French Junior Open, beating Angie Van Impe of Belgium 7-6, 6-4 but lost to the top seed Petra Marcinko of ...
Sports
3 months ago

The country's youngest Kenya Open champion bowed out in the first round during the first warm-up tournament in Italy.
Sports
4 months ago

Okutoyi — ranked 60th in the International Tennis Federation (ITF) Junior rankings announced on January 3 — said she will be targetting masterstrokes ...
Sports
5 months ago

Okutoyi handed bye to second round of Nottingham Open

The Nottingham Open will be an eye-opener for Okutoyi, especially in terms of mastering the grass-court surface
Sports
3 months ago

Okutoyi to grace Women's Futures tournaments in Tunisia and Egypt

The country's youngest Kenya Open champion said she has six weeks to prepare for the final grand slam of the year, the US Open at Flushing Meadow in ...
Sports
2 months ago

Okutoyi, who is also the Africa Junior champion, was received by Sports Minister Amina Mohammed
Sports
2 months ago
Post a comment
WATCH: The latest videos from the Star
by ALVIN KAUSAI
Tennis
19 July 2022 - 05:00
Read The E-Paper