Rybakina says she ‘did not know’ how to celebrate victory

• Rybakina produced a stunning fightback to beat Jabeur, who was one of the favourites for the title from the beginning.

• Jabeur later joked that she will have to teach the new major champion “how to celebrate properly”. 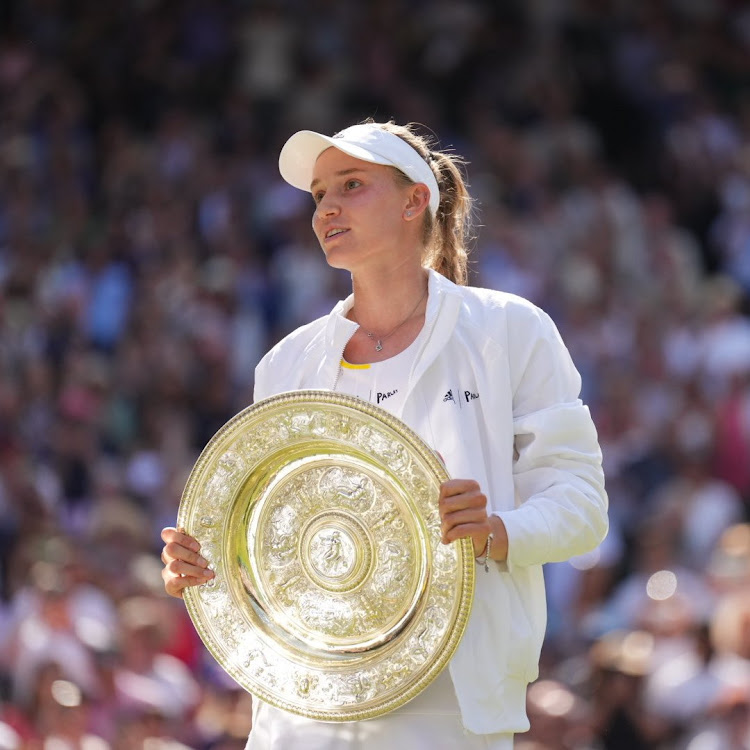 New Wimbledon champion Elena Rybakina said she “did not know” how to celebrate her “shocking” victory over Ons Jabeur in the final.

The 23-year-old is known for not celebrating victories and simply raised her right arm in the air when she won.

Jabeur later joked that she will have to teach the new major champion “how to celebrate properly”.

Rybakina produced a stunning fightback to beat Jabeur, who was one of the favourites for the title from the beginning.

She raised her racquet to the crowd after the winning moment before heading into the stands to celebrate with her box.

“Maybe one day you will see huge reaction from me, but unfortunately not today,” Rybakina said.

“I didn’t know what to do, it was shocking. It’s too many emotions. I was just trying to keep myself calm.

“When I was giving the speech [on court] I was thinking, I’m going to cry right now, but somehow I held it.

“Maybe later when I’m alone in the room, I’m going to cry non-stop. I don’t know.”

Rybakina did grow emotional when asked in her news conference if her parents would be proud, tearing up before joking: “You wanted to see emotion! I kept it too long.”

‘Kazakhstan believed in me’

Moscow-born Rybakina has represented Kazakhstan since 2018 when she first focused on turning professional.

The All England Club did not allow Russian and Belarusian players to compete at this year’s tournament in response to Russia’s invasion of Ukraine. Rybakina has repeatedly credited the Kazakh tennis system with allowing her to develop as a player and spoken of her pride in representing them at Grand Slams and the Olympics.

The president of the Kazakhstan Tennis Federation was in her support box on Saturday and the country’s president also congratulated her on social media.

Rybakina, however, said: “From my side I can only say that I’m representing Kazakhstan. I didn’t choose where I was born.

“People believed in me. Kazakhstan supported me so much. Even today I heard so much support. I saw the flags.”

Who is new Wimbledon champion Rybakina?

Rybakina was a keen gymnast and ice skater as a child before she was told she would not succeed as a professional because of her height. Her father encouraged her to play tennis but the turning point came when she left school. Worried about the financial implications of turning pro, her father wanted her to go to college and she had numerous offers from universities in America.

However, the Kazakhstan Tennis Federation made an offer to financially support her, which led to her representing them from 2018 onwards.

She won her first WTA Title at Bucharest in 2019 before she had a breakthrough start to 2020, reaching four finals in her first five events.

That led to her becoming the first female Kazakh singles player to reach the top 20 before the tour shut down because of the coronavirus pandemic.

However, she admitted she did not expect to reach the second week at this year’s tournament, let alone go on to win the title.

“I think that I’m going to enjoy for sure maybe tomorrow, maybe when everything is going to be calm,” she said.

“I’m going to be around my close friends, family. I’m going to remember all the memories on this day for sure.”

Jabeur, who was bidding to become the first Arab player to win a Grand Slam singles title, has enjoyed warm support throughout the two weeks at Wimbledon.

She shared a friendly conversation with Rybakina at the net following the match and said afterwards her opponent “really deserved” the title.

“Maybe because she’s shy and she doesn’t show her personality, I think her game speaks for her,” Jabeur, 27, said.

“It’s nice to play Elena. Even when you lose against her, she didn’t do any big celebration or anything.

“I need to teach her how to celebrate really good.”

Jabeur showed journalists in her news conference her phone lock screen, which was the Venus Rosewater Dish.

She joked that she would change the picture back to one of her niece but may also use one of the US Open trophy - the next Grand Slam of the season.

“I will leave happy, with a big smile always. Tennis is just a sport for me. The most important thing is that I feel good about myself.”

Wimbledon: Elena Rybakina says she 'did not know' how to celebrate victory