•The teen sensation said she has adapted well to the grass-court surface.

•Okutoyi's coach Thuku Rogoi said they will take one game at a time for the Wimbledon Junior Championships. 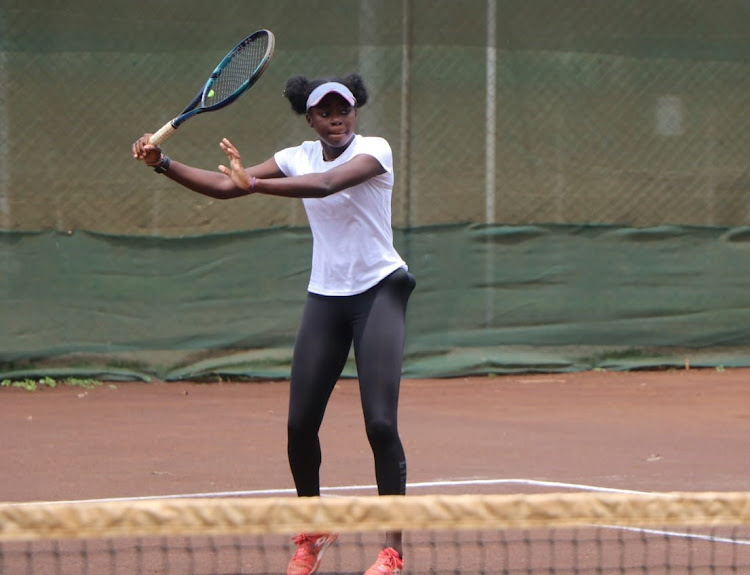 Angella Okutoyi during an exhibition match at the Karen Club on April 24, 2022.
Image: HANDOUT

Africa Junior tennis champion Angela Okutoyi is confident of performing well in the Wimbledon Junior Championship despite pulling out of the Roehampton event due to illness.

Okutoyi said she has recovered fully and she is ready for Wimbledon which starts on Saturday.

“I was not feeling well early last weekend but I have been treated and I can now focus on playing at Wimbledon. I have had a couple of days to get up to speed with my training and I will be ready for the start of the championship," said Okutoyi

The country's youngest Kenya Open champion had a mixed start in the Nottingham Junior Open, beating home favourite Given Roach 6-4, 7-5 but lost in the third round 7-5, 7-6 to Turkey's Aysegul Meert.

She added she is working on her forehand and service game ahead of the start of the championship. I have been working on it and with the help of the coaches, I have improved," noted Okutoyi.

Okutoyi's coach Thuku Rogoi said they will take one game at a time for the Wimbledon Junior Championships.

“She did fairly well in Nottingham and she is improving. We will take it one game at a time and at the end of the day, we look forward to improving her ranking,” said Okutoyi.

Elsewhere, third seed Alicia Owegi progressed to the quarterfinals of the ITF World Tennis tour at the Nairobi Club by beating Chepkemoi Yego 6-2, 6-2. Owegi is using the tournament as a build-up for the Billie Jean King Cup slated for Macedonia.

She was in superb form from the onset, breaking her opponent's serve to race to a lead, which she never relinquished.

Rosehilda Asumwa fell by the wayside in the second loss to Deeney Richards of Great Britain 6-4, 6-3. Faith Urasa lost to Janvi Asawa of India 6-2, 6-1.

"I played well but lost to a more experienced opponent. I have learnt my lessons and will want to bounce back and go all the way next time,” said ...
Sports
1 month ago