Collins to play Swiatek in semi-finals

Collins, 28, had surgery for endometriosis in April, returning to action two months later.

•Poland's Swiatek, who won the 2020 French Open title as a teenager, will play in her second Grand Slam semi-final after coming through an intense battle which lasted more than three hours.

•Endometriosis is a condition where cells like the ones in the lining of the womb grow elsewhere in the body. 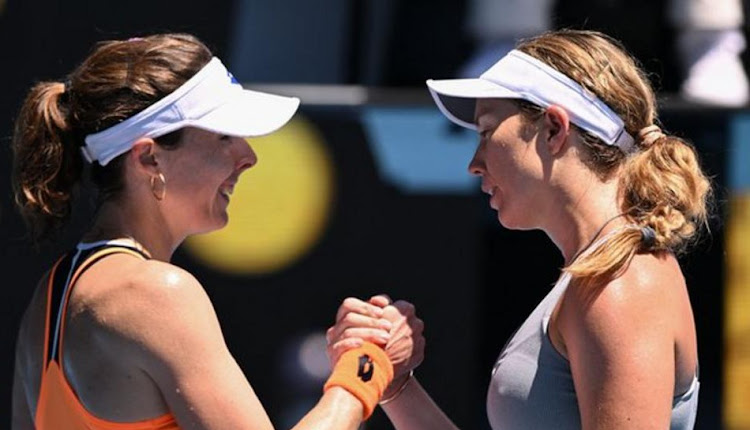 Danielle Collins (right) ended the run of Alize Cornet, who was competing in her first major quarter-final at the 63rd attempt
Image: REUTERS

American Danielle Collins said it felt "incredible" to reach the Australian Open semi-finals less than a year after taking an indefinite break from tennis.

Collins, 28, had surgery for endometriosis in April, returning to action two months later.

Now the 27th seed has reached her second semi-final in Melbourne after a 7-5 6-1 win over France's Alize Cornet.

Poland's Swiatek, who won the 2020 French Open title as a teenager, will play in her second Grand Slam semi-final after coming through an intense battle which lasted more than three hours.

For 36-year-old Kanepi, it was more quarter-final heartbreak. The Estonian was playing in her seventh major quarter-final - after six previous appearances in the past eight between 2008 and 2017 - and has lost all of them.

Both women's semi-finals will be played in Thursday's night session after organisers moved them to the primetime spot in a break of tradition.

Australian world number one Ashleigh Barty takes on unseeded Madison Keys of the United States at 19:30 local time (08:30 GMT), with the match between Collins and Swiatek following.

Both of Collins' major semi-final appearances have been at Melbourne Park, with this one holding extra significance after her health concerns.

Collins announced she was stepping away from the tour last year to have the surgery, saying it was causing her "too much physical agony" and affecting her "overall day-to-day life".

Endometriosis is a condition where cells like the ones in the lining of the womb grow elsewhere in the body.

After surgery and helped by medication, Collins says she is now having less painful periods and is able to train more consistently.

That has resulted in another strong run at the Australian Open, where she used her trademark power to beat Cornet.

Collins decisively broke in what proved to be the final game of a tight first set, then won the opening five games of a second set lasting 30 minutes.

"It feels incredible, especially after some of the health challenges I've had," said Collins, who lost to eventual runner-up Petra Kvitova in the 2019 semi-finals.

"Once I was able to get the proper diagnosis and the surgery, I feel like it's helped me so much - not just from a physical standpoint but from a mental standpoint.

"When you're dealing with that type of physical pain multiple weeks out of the month, you're not putting yourself in a position to be able to perform consistently and to be at your best whether as an athlete or a person.

"To be able to compete with these women, it's such an honour."

While Collins won in just under an hour and a half, Swiatek and Kanepi took much longer to separate in a demanding encounter on a hot Melbourne afternoon.

The games were long and gruelling from the start as the pair battled from the baseline, with as many mistakes as there was magic.

Kanepi, ranked 115th in the world, finally clinched the opener with her ninth set point, which was the fifth on her own serve at 5-4 after Swiatek saved four in the previous 16-minute game.

Swiatek recovered - mentally and physically - to move 4-1 ahead in the second set, but two more double-faults - taking her tally in the match past the seven she had previously produced in the whole tournament - helped Kanepi put the set back on serve.

That led to the second-set tie-break which Swiatek won after upping her level and teasing several loose returns from Kanepi.

After two hours and 13 minutes, the pair had to be split by a deciding third set.

Both players continued to struggle on serve, but Swiatek clinched victory with her fourth break in the set after showing incredible scrambling to stay in her second match point.

Kanepi eventually missed with a pushed backhand, leading to Swiatek flinging her racquet in a mixture of ecstasy and relief.

"This match was crazy and without the energy in the stadium I don't think I could have done it," said Swiatek, who fought back from a set down for the second consecutive match.

Banging down back-to-back aces to claim the first set, Keys roared to a 3-0 lead in the second before a rare wobble on serve gifted French Open ...
Sports
3 months ago