•Nadal is two more victories away from earning a record 21st Grand Slam men's title, which would move him clear of long-time rivals Novak Djokovic and Roger Federer.

•Throughout his career, Nadal has exerted every bit of energy and fight possible - with all those trademark qualities on show in an absorbing contest with 14th seed Shapovalov. 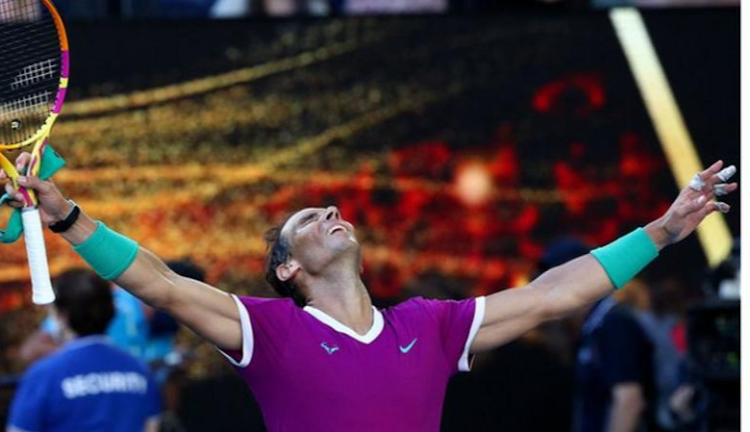 Rafael Nadal has reached the Australian Open semi-finals for the first time since 2019.
Image: BBC

Rafael Nadal again showed the immense fight which has characterised his career as he overcame physical issues to beat Canada's Denis Shapovalov and reach the Australian Open semi-finals.

Nadal, whose only title at Melbourne Park came in 2009, needed medication for what seemed to be a stomach issue.

The 35-year-old faces Matteo Berrettini or Gael Monfils in the last four.

Nadal is two more victories away from earning a record 21st Grand Slam men's title, which would move him clear of long-time rivals Novak Djokovic and Roger Federer.

Nadal's relief at coming through the toughest of tests was evident after Shapovalov pushed a backhand volley wide on the Spaniard's first match point.

Grinning widely, Nadal celebrated by standing in front of his box and staring at his team while shaking both fists towards them. In contrast, Shapovalov demolished his racquet on the court.

Afterwards, Nadal said he "didn't know" how he managed to win on a Melbourne afternoon where temperatures topped 30C.

"I was completely destroyed," he said. "It was a very tough day, very warm, I didn't practice for it.

"At the beginning of the match I was playing great, I know how difficult it is to play against a player like Denis.

"I had my chances at the beginning of the third, I didn't get it and then started to feel a bit more tired and he pushed me."

In the absence of the deported Djokovic and the injured Federer in Melbourne, Nadal can move ahead of his great rivals in the race to finish with most major titles.

While eager to win as many Grand Slam titles as possible, Nadal has often said he is not motivated by beating Djokovic and Federer.

At this year's Australian Open, he is grateful to be even playing.

Nadal missed five months because of a foot injury which - he revealed last week - left him doubting whether he would even return to the top-level.

A bout of coronavirus in mid-December also left him "very sick with fever".

After beating Shapovalov to move closer to another Grand Slam title, Nadal said: "Of course, I'm surprised to be here.

"We can create history but the real thrill is that two months ago we didn't know if we could be able to get back on tour.

"For me this is a present of life to be playing tennis again and I am just enjoying it."

Shapovalov, who was bidding for his second Grand Slam semi-final after reaching the Wimbledon last four in July, had a discussion with Nadal at the net following his complaint.

Throughout his career, Nadal has exerted every bit of energy and fight possible - with all those trademark qualities on show in an absorbing contest with 14th seed Shapovalov.

Everything seemed to be going swimmingly for Spaniard when he led by two sets against the 22-year-old, who was aiming to reach his first Australian Open semi-final.

Nadal broke once in each of the opening two sets and did not face a break point himself.

Shapovalov, who struggled with his returning game in particular, showed his frustrations at the start of the second set by complaining to umpire Carlos Bernardes about how long Nadal was taking between points.

The official did not see fit to give a time violation, leading Shapovalov to shout: "You guys are all corrupt."

But he regained his composure and changed the momentum of the match in third set.

Shapovalov, now guided by Andy Murray's former coach Jamie Delgado, was unable to convert either of the two break points in the sixth game but sealed the set with his fourth chance.

Another break for the Canadian saw Nadal trail 4-1 in the fourth, when the Spaniard called the trainer for his stomach issue.

Nadal grimaced as he discussed the issue with the medic, pointing to his abdominal area before taking medication to alleviate the problem.

Shapovalov maintained his advantage to level the match and bring back memories of Nadal losing from two sets up against Greece's Stefanos Tsitsipas in last year's quarter-finals.

But Nadal broke serve in the second game of the decider, saving break points in his service games either side, to reach the Melbourne semi-finals for the first time since 2019.

"I am not 21 anymore, after this match it is great to have two days off," said Nadal.

"I felt quite good physically in terms of movement but the conditions haven't been that hot."

•Nadal, who was on course to face fellow great Djokovic in the semi-finals, said: “The Australian Open will be great with or without him.”
Sports
3 months ago
by BBC
Tennis
25 January 2022 - 12:05