Okutoyi seeks to bounce back in second leg of ITF tourney

Ominde expressed confidence that he can go on a good run in the second leg having tweaked his game to meet the demands of the hardcourt surface. 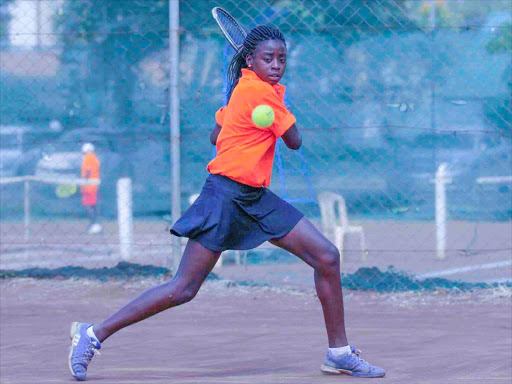 Kenya's top ranked junior Angela Okutoyi will be seeking a change of fortunes at the second leg of the ITF under 18 tournament  Wednesday in Sousse, Tunisia

Okutoyi reached the doubles final last week alongside Tunisian Feryl Ben Hasaan but lost to Russian pair of Jira Pavlova and Ekaterina Khayrutdinova 6-3 7-5. She also lost in the first round of the singles category, going down 7-5 4-6 6-1 to Moroccan Aya El Aouni .

The youngest Kenya Open winner in history will be hoping to go on a good run this week.

"Last week was tough. Acclimatising to the conditions in Tunisia took a while and having been here for a week, I feel I am ready to play better this time around in the singles category,” added Okutoyi.

Okutoyi is using the tournaments in Tunisia to further move up the rankings in preparations for the junior grand slams in 2022.

"The level of competition is quite high, meeting some of the top juniors in the world and I have to be at my best to win," noted Okutoyi

Okutoyi, who is based at the ITF training centre in Casablanca, finished second at the Africa Nations Cup event in the same city a fortnight ago as Team Kenya ranked fourth overall in both the boys' and girls' categories.

Kenya's other representatives fell by the wayside in the first leg including Rosehilda Asumwa, Cynthia Wanjala, Alicia Owegi, Derrick Ominde and Kael Shah.

Ominde expressed confidence he can go on a good run in the second leg having tweaked his game to meet the demands of the hardcourt surface.

“We are used to playing on slow murram courts back home but I am confident I have adjusted and am raring to go after training on the hardcourt for a week,” added Ominde.