•On resumption Louis Kisia charges came out firing on all cylinders pinning the bankers in their own half. 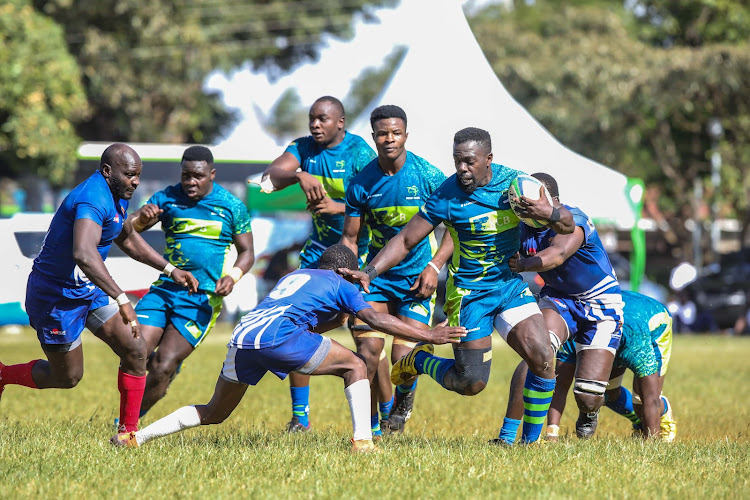 KCB assistant coach Dennis Mwanja lauded the resilience of  his charges after beating Strathmore 33-18 to keep their unbeaten run in the Kenya Cup.

Mwanja said the introduction of scrumhalf Brian Wahinya changed the match for the bankers after the varsity side had caused them problems thorughout the hour.

“We made a few mistakes in the second half. Leos had a lot of questions that we lacked answers to. We were poor in our ball handling but I’m grateful that our boys  fought back to reclaim the lead and win the game,” added Mwanja.

The tactician  said the tougher tests will come, especially against champions Kabras and last season's runners up Menengai  Oilers next month.

"This test will serve us well going forward especially knowing that we are meeting tougher rivals. It showed our true character which will help us going forward,” added Mwanja.

Man of the match Wahinya said he was delighted with the performance and result.

"Today’s win is a testament to our unending desire to always leave a mark in all our matches. Leos are a strong side but our valiant display proved that a win was the only foreseeable result,” said Wahinya.

Flanker Felix Ojow opened the scoring with a well-taken try converted by Darwin Mukidza for a 7-0 lead .

Mukidza then scored his own try and converted for a 14-0 lead. Strathmore began to dominate possession and territory and Brunson Madigu crashed over the line to reduce the gap to 14-5 at the interval.

On resumption Louis Kisia's charges came out firing on all cylinders, pinning the bankers in their own half.

They scored two penalties courtesy of Stephen Osumba to narrow the gap to 14-11 before lock Regan Juma powered his way over the line with Osumba slotting home the conversion to give the students an 18-14 lead.

Former champions KCB, who were playing at home, stepped up a gear with Wahinya coming off the bench to inspire the hosts with a try and creating the bonus point try for Isaac Njoroge to seal the result.

Quins continued with their resurgence with a 28-11 win over Homeboyz as Nakuru beat Mean Machine 37-8. Catholic Monks edged MMUST 20-13.

Paul Murunga believes a good run of form in the second half of the season will see them secure a playoff slot.
Sports
1 week ago