Korir sets his sights on next year's Boston Marathon honours

•Former Commonwealth 5000m gold medallist Augustine Choge has also been entered for the event having clocked 2:20:53 to finish 16th at the 2021 New York Marathon.

•Others added to the event include Shura Kitata of Ethiopia as well as compatriot Ghirmay Ghebreslassie, who is the 2015 champion. 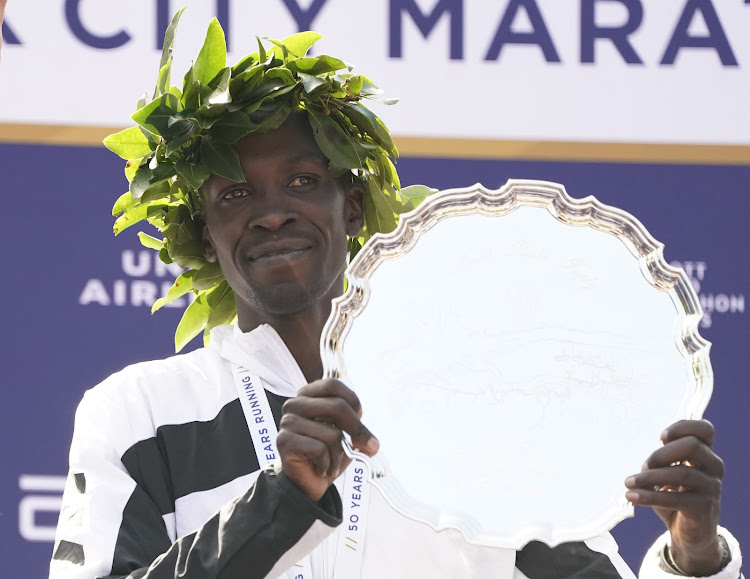 The 2021 New York Marathon champion Albert Korir has been added to the Boston Marathon field for next year's event.

Korir made his debut in Boston last year, finishing sixth in 2:08:50 and will be hoping to win the event.

“I'm looking forward to Boston. Last year was my debut and I finished sixth. This time around,  I hope I can go all the way and win it,” added Korir.

He said he is looking forward to rubbing shoulders with the top marathoners in the world.

“It will be a tough race but I have prepared well and I am looking forward to competing against the best in the world,” he added.

Former Commonwealth 5000m gold medallist Augustine Choge has also been entered for the event, having clocked 2:20:53 to finish 16th at the 2021 New York Marathon.

Others added to the event include Shura Kitata of Ethiopia as well as compatriot Ghirmay Ghebreslassie, who is the 2015 champion.

It brings the total number of sub-2:07 performers in the field to 15. Eight of those have bettered 2:05.

Tanzanian record-holder Gabriel Geay is the third fastest man in the field, after Kipchoge and Chebet.

Geay, who finished runner-up at the Valencia Marathon last month at 2:03:00, has had success racing on the roads of Boston, winning the 2018 Boston 10K and placing fourth at last year’s Boston Marathon.

“I am excited to be returning to the Boston Marathon this year,” said Geay. “I fulfilled a dream by racing in Boston last year, but my goal is to one day win the race, and I hope that 2023 will be my year.”

Brazilian Olympian and national record-holder Daniel do Nascimento will make his Boston debut, as will Ethiopia’s Herpasa Negasa, a 2:03:40 marathon runner

After a 2:08:16 marathon debut in Chicago last year, Conner Mantz will take on the Boston course for the first time. He is coached by Olympic marathoner Ed Eyestone.

Serem said he wants to be part of the battalion that will launch a campaign in Budapest to reclaim the lost glory.
Sports
3 weeks ago
Post a comment
by WILLIAM NJUGUNA AND AGENCIES
Rugby
13 January 2023 - 05:00
Read The E-Paper