Esilaba also announced that South African Carlos Katywa will be the head coach for the upcoming season.

•The Victoria Cup tournament is being used to give teams in Western Kenya adequate preparation for the start of the Kenya Cup and Championship season. 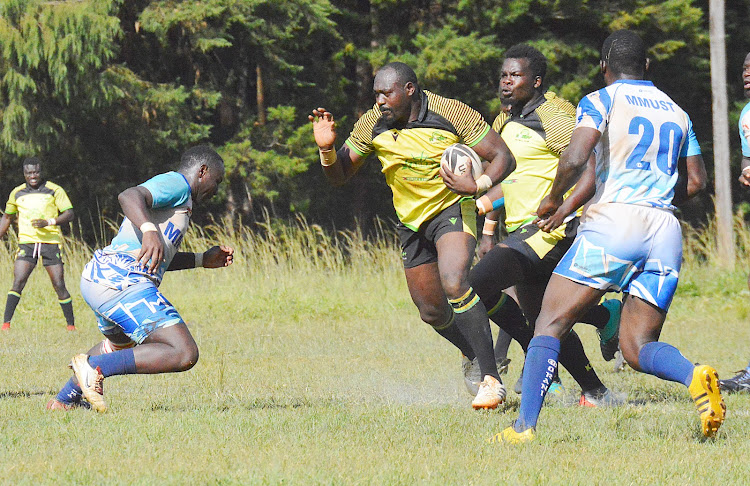 Kabras Sugar captain Dan Sikuta with the ball during a past match against MMUST RFC
Image: FILE

Event organiser Edwin Esilaba said they are looking to include last season's Kenya Cup finalists Menengai Oilers to grace the event alongside two clubs from Nairobi.

"Planning for next year's event has already started in earnest and I believe It will be bigger and better than this year," said Esilba.

He added: "Bringing the Ugandans sides will be a game changer because  they have quality and it will raise the profile of the competition."

Prize money is something the organisers are also considering for next year. This year's event attracted 5000 fans and was free to the public.

Esilaba, who is also the Kabras RFC chairman, said the sugar millers who won the inaugural event a fortnight ago will take part in the event alongside losing finalists Masinde Muliro University, Kisumu RFC, Western Bulls, Eldoret RFC, Mbale RFC and Kisii RFC among others

The Victoria Cup tournament is being used to give teams in Western Kenya adequate preparation for the start of the Kenya Cup and Championship season.

Esilaba also announced that South African Carlos Katywa will be the head coach for the upcoming season. Katywa was an assistant coach under Jerome Muller who departed recently after his contract was terminated.

Esilaba said continuity was key for the side as they attempt to defend the Kenya and Enterprise Cups won last season.

Katywa will be assisted by former international Max Adaka, who will take charge of the forwards and defence. Former Kenya Sevens star Felix Ayange will be the skills coach while Edwin Achayo will be in charge of the backs

Esilaba said the depth in the squad will be key, especially with 10 players on the recovery list having played for the Simbas during the World Cup repechage.

"We have given some of the fringe players opportunity to play at the Victoria Cup and they have done well and we hope they carry the form to the new season," he noted.

At the culmination of a turbulent week that saw the players down their tools, the East Africans put up a gallant display before running out of steam ...
Sports
2 weeks ago

Dennis Mwanja’s charges will be using the tournament as preparation for the Olympic qualifiers set for next year in Zambia.
Sports
2 weeks ago
Post a comment
by WILLIAM NJUGUNA Senior Sports Writer
Rugby
22 November 2022 - 00:00
Read The E-Paper