Onsomu recalled to Simbas ahead of repechage battle

The Simbas are looking to undergo a three-week training camp in South Africa from October 8-26.

•Speaking yesterday, team manager Jimmi Mnene said the team finished the second training camp over the weekend and was pleased with the progress.

•Mnene said he is hopeful funds will be available for South Africa Tour as they seek to adequately prepare for the event. 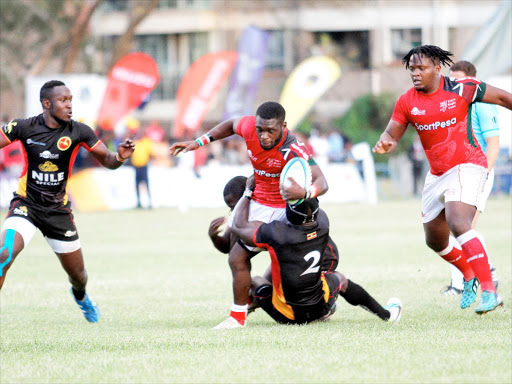 Former Kenya Simbas' skipper Samson Onsomu has been recalled to the squad for the repechage World Cup qualifier in Dubai in November.

He sustained an injury during the Kenya Cup season, ruling him out of the second phase of the World Cup qualifiers held in July in France.

The former Impala player's return will bring competition to the half-backs role with KCB's Samuel Asati and Kabras Brian Tanga having dominated the number nine jersey in the recent past.

Onsomu brings experience to the squad having played for the Simbas since 2016.

Speaking yesterday, team manager Jimmi Mnene said the team finished the second training camp over the weekend and was pleased with the progress.

“The boys are in good shape and their last two training camps have been beneficial to the team. We hope to build on that and I believe we can only get better,” added Mnene.

In camp, Mnene said they have worked on the mentality of the team with the Simbas set to face higher-ranked opposition during the repechage in Dubai.

“It's an area where we have to focus on and prepare players mentally to be competitive against the higher ranked teams," he added.

The Simbas are looking to undergo a three-week training camp in South Africa from October 8-26.

Here, they will play against some of the top South African provincial sides before returning home and departing for the repechage in Dubai

Mnene said he is hopeful funds will be available for South Africa Tour as they seek to adequately prepare for the event.

“The union is working on it and we hope in the next fortnight the funds will be available. The total cost of playing in South Africa is Sh30 million," he noted.

Mnene said they have Plan 'B' just in case funds will be unavailable. "We may revert to inviting some of the South African teams to come and play in Kenya just in case there will be no funds."

The Simbas face a herculean task when they play the USA, Portugal, and Hong Kong in a round-robin format.

The winner will qualify for the Rugby World Cup, where they will tackle winners from Pool 'C' comprising two-time champions Australia, Wales, Georgia, and Fiji.

Quins to face Menengai Oilers in raft of pre-season friendlies

Wamalwa, Okwach called up to Simbas squad ahead of repechage

The duo is expected to bring competition in the backline positions, especially on the wing and fullback.
Sports
2 months ago