DUO IN THE FOLD

Wamalwa, Okwach called up to Simbas squad ahead of repechage

The duo is expected to bring competition in the backline positions, especially on the wing and fullback.

•The Simbas missed out on direct qualification to the Rugby World Cup set for France in 2023 after finishing as runners up to Namibia in the Rugby Africa Cup final, when they fell to a 36-0 defeat.

•Wamalwa has been revelation on the 2022 sevens circuit being being named top points scorer in the Christie sevens as well playing a pivotal role for the deejays as they won the Dala sevens in Kisumu. 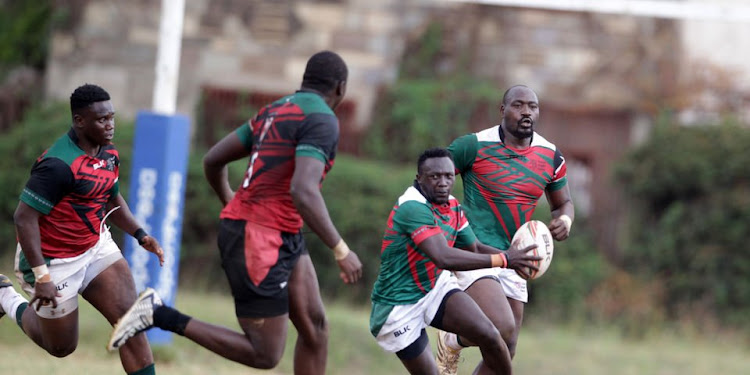 Simbas Brian Tanga with ball during a Simbas training sessionm

Homeboyz Sevens star Amon Wamalwa and KCB winger Geoffrey Okwach have been called to the Kenya Simbas training squad for the World Cup repechage slated for Dubai in November.

Wamalwa was a revelation on the 2022 Sevens circuit after being named top points scorer at the Christie Sevens as well as playing a pivotal role for the deejays as they won the Dala Sevens in Kisumu.

Okwach had also had a great season with the bankers as they finished second on the circuit. He was also part of the Kenya Under 20 team three years ago as well as playing for Shujaa at the World Seven Series in the 2019/20 season.

The duo is expected to bring competition in the backline positions, especially on the wing and fullback.

The Simbas head for a four-day training camp in Nairobi on Saturday to prepare for the repechage.

Head coach Paul Odera said despite the late start to their preparation, he is delighted that the camp is finally assembled.

"Our last game was against Namibia on July 9 in the Africa Cup final. We have been away for two months due to various factors like the general elections and lack of funding but it's now all systems go as well look at qualifying for the Rugby World Cup,” said Odera.

The Simbas missed out on direct qualification to the Rugby World Cup set for France in 2023 after finishing as runners-up to Namibia in the Rugby Africa Cup final, where they fell 36-0.

Odera's charges had beaten Uganda 42-7 in the quarters and Algeria 36-33 in the semis before coming up short against Namibia in a one-sided final with the Southern Africa side scoring five tries to nil in a dominant display.

The Simbas face the USA, Portugal and Hong Kong in the week-long qualifier with the winners slotting to Pool C of the Rugby World Cup in France next year with two-time champions Australia, Wales and Georgia awaiting.

Kepha expects a competitive season with the likes of Homeboyz and Quins also keen on playing in the playoffs.
Sports
3 weeks ago

The skipper said the recent improvements have given them hope they can compete with the world's best come next season.
Sports
3 weeks ago
Post a comment
WATCH: The latest videos from the Star
by WILLIAM NJUGUNA Senior Sports Writer
Rugby
17 September 2022 - 05:00
Read The E-Paper