EYE ON THE PRIZE

Head coach McGrath oozed confidence following their straight wins over Uganda and Jamaica on the first day of the competition.

•Kenya 7s centre Willy Ambaka said they experienced a good shift and hoped they would replicate the outcome in subsequent assignments.

•He said they have their sights firmly fixed on the ultimate prize and the intensity of their preparations would reflect in the tournament. 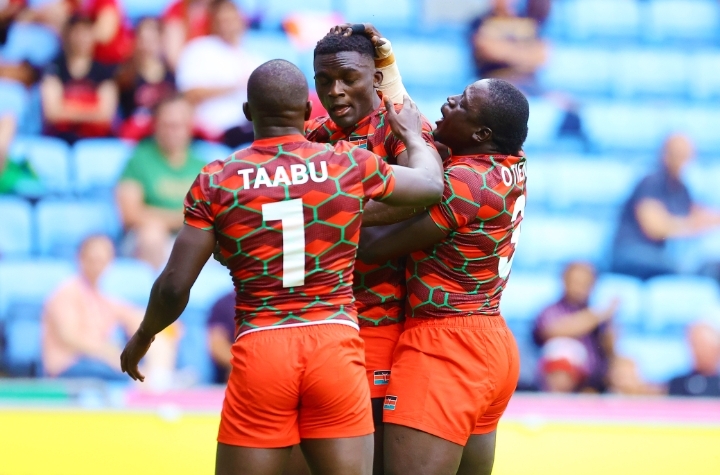 Shujaa celebrate during their game against Jamaica at the Coventry Stadium in Birmingham on Friday
Image: HANDOUT

Kenya 7s head coach Damian McGrath has challenged his charges to tighten their shoelaces as competition gains momentum at the Birmingham 2022 Commonwealth Games in the United Kingdom.

McGrath oozed confidence about their chances at the games following their straight wins over Uganda and Jamaica on the first day of the competition.

McGrath spoke after his charges thumped Jamaica 45-0 at Coventry Stadium in Birmingham to storm into the quarterfinals.

“Now the big job starts. We have to marshal that physicality, show some old-fashioned Kenyan values at the breakdown and in the defence and push them hard. Whatever they get they have to work hard for,” McGrath said.

“To win a competition you have to be everybody, so we'll play whoever we'll have to play,” he added.

The gaffer said the pressure to keep up with the pace set by Australia in the other fixture of their group didn't distract his charges from having fun against Jamaica.

“The pressure was on because Australia had scored 60 but we weren't that far behind. It was nice for everybody to get a good touch and some good tries and just get into the rhythm.

“We just wanted to get our rhythm going and play a little rugby and we were pleased to do that. I mean, to play and not concede a point is good against anybody,” McGrath said.

“Kenyan fans were fabulous and as usual they are the eighth man on the team. I won't say that's an advantage for the team but it's nice to be here and play in front of my people. It feels really good.

Kenya 7s centre Willy Ambaka said they experienced a good shift and hoped they would replicate the outcome in subsequent assignments.

“The boys are looking sharp. It has been grueling several weeks in camp. So we are really happy with the results and it has been a good day one for the boys,” said Ambaka.

Ambaka said a conducive environment in the Kenyan camp was instrumental in the team's perfect run thus far.

“It's a happy camp, I mean that's the most important thing. You can do everything right but if the boys are not happy it's hard to get the results because their minds are not settled.

“We are just happy and we just love every moment. We are happy to represent our country and the 40 million plus people back home.”

He said they have their sights firmly fixed on the ultimate prize and the intensity of their preparations would reflect in the tournament.

“Why not, we trained to compete not just to participate. We are going to take one game at a time, our next game is against Australia and after that, we will start focusing on the quarter-finals stages and, well, that's how it is supposed to be.

“It's been a tough seven weeks. Our coach and the rest of the management staff have been putting us under the pump. Like I said it's a happy camp as well and that bit is very important. You can just see how the boys are playing and enjoying themselves.

“We are just going to try and top the pool and focus on other games as well.”