•Just before half time Oilers scored the opening try when Steve Arunga pounced on  a grubber kick to touch down and Dennis Abukuse converted for a 7-0 lead at the break.

•Minutes later  Oilers were however reduced to six man when star flyhalf Geoffrey Ominde was sent to the sin bin for persistent infringement. 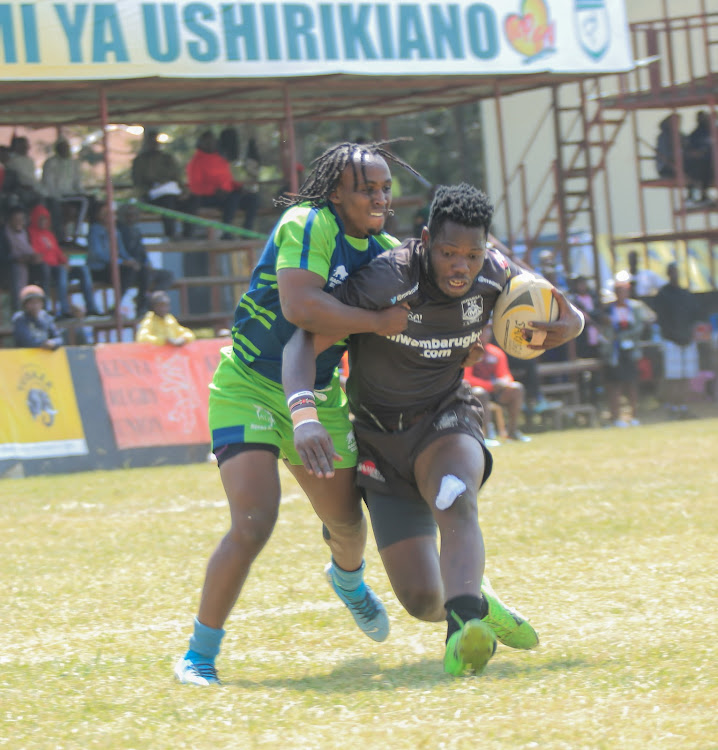 The Nakuru-based side became the fifth team to win a leg of the circuit, setting the stage for a grand finish this weekend at the Kakamega Sevens.

Gibson Weru 's charges had lost the Driftwood Sevens final to Mwamba and Dala Sevens final to Homeboyz but finally got the well-deserved win in front of their home fans.

In a tense final, the two sides were evenly matched in the opening period with both committed to attacking, but poor decision-making cost them.

Just before halftime, Oilers scored the opening try when Steve Arunga pounced on a grubber kick to touch down and Dennis Abukuse converted for a 7-0 lead at the break.

On resumption, Oilers stepped up a gear, pinning Strathmore into their own half and Abukuse powered his way over the line to score an unconverted try and a 12-0 lead.

Minutes later, Oilers were reduced to six men when star flyhalf Geoffrey Ominde was sent to the sin bin for persistent infringement.

The varsity outfit capitalised on the advantage with Branson Madigu showing the Oilers defence a clean pair of heels to touch down with George Omoro kicking over the conversion to narrow the deficit to 12-7.

Oilers, however, held on for the victory to go top of the standings with 97 points. KCB are second on 90 points as Strathmore Leos, five ahead of third-placed Leos.

In the semifinals,  Oilers held off KCB 19-14 as Strathmore thrashed Homeboyz 26-5 in the second.

Kabras RFC finished fifth after beating Quins 14-0 in the fifth-sixth playoff final and achieve their highest finish of the circuit so far this season.

Race for national Sevens title hots up in Nakuru this weekend

Defending champions Mwamba will fancy their chances of navigating Pool 'D' when they take on Strathmore Leos, Blak Blad and newly-promoted Vihiga ...
Sports
4 months ago

All systems go ahead of this weekend's Prinsloo Sevens

The tournament will begin with the Age Grading Championships today ahead of the senior event and Division Two Championships on Saturday and Sunday.
Sports
4 months ago
Post a comment
by WILLIAM NJUGUNA Senior Sports Writer
Rugby
11 July 2022 - 05:00
Read The E-Paper