Head coach Louis Kisia termed the pool tricky for his charges and said they will take one game at a time.

•Pool 'B' will see defending champions KCB seek to bounce back when they face Kabras, Daystar Falcons and Pirates 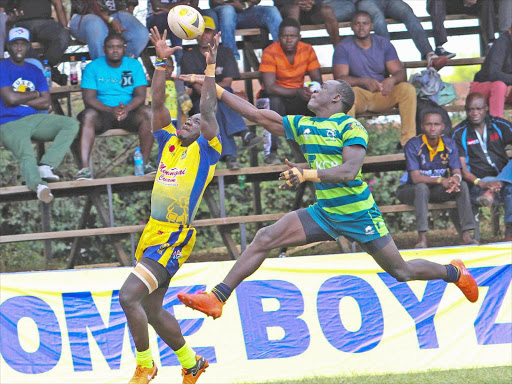 Homeboyz' Leonard Mugaisi vies for the ball with KCB's Jacob Ojee during the 2018 Christie 7s.jpg

Fresh from winning the Christie Sevens, Strathmore Leos face Impala, Homeboyz and Mombasa in the Driftwoods Sevens set for June 18-19 in Mombasa.

Head coach Louis Kisia termed the pool tricky for his charges and said they will take one game at a time.

“This will be a tough pool considering the quality of both Homeboyz and Impala. Mombasa will also want to prove a point considering they will be playing at home. On our side, we want to maintain our Christie Sevens performance and win,” said Kisia.

Pool 'B' will see defending champions KCB seek to bounce back when they face Kabras, Daystar Falcons and Pirates.

Head coach Dennis Mwanja will also be expecting to have Kenya Sevens players for the event. "The national team players are back and we will see if they are available for selection to bolster our squad and give us an opportunity of defending our title,” added Mwanja.

Menengai Oilers, who have finished third in the two opening tournaments, face Quins, Nakuru and Blak Blad in Pool C.

"Nyaundi had an injury on his arm and we hope the two-week break will help him recover for the event in Mombasa,” said Weru.

The former Kenya Sevens playmaker says they have set a target of getting to the final in Momabasa. “We have been to two semifinals and our next traget should be to qualify for the final and win,” said Weru.

The top two teams in each pool qualify for the quarterfinals while the teams that finish third and fourth drop to the classification fixtures.

Shujaa have lost both encounters to the Irish this season losing 29-7 in Dubai in November and 21-14 in Vancouver in March.
Sports
4 months ago

"I must commend the team for putting up resolute defence despite the defeat. We made 10 changes and the boys put in a tough shift against quality ...
Sports
3 months ago
Post a comment
WATCH: The latest videos from the Star
by WILLIAM NJUGUNA
Rugby
02 June 2022 - 05:00
Read The E-Paper