Despite his achievements thus far, the tough-tackling KCB man believes there is more to come from him and his teammates. 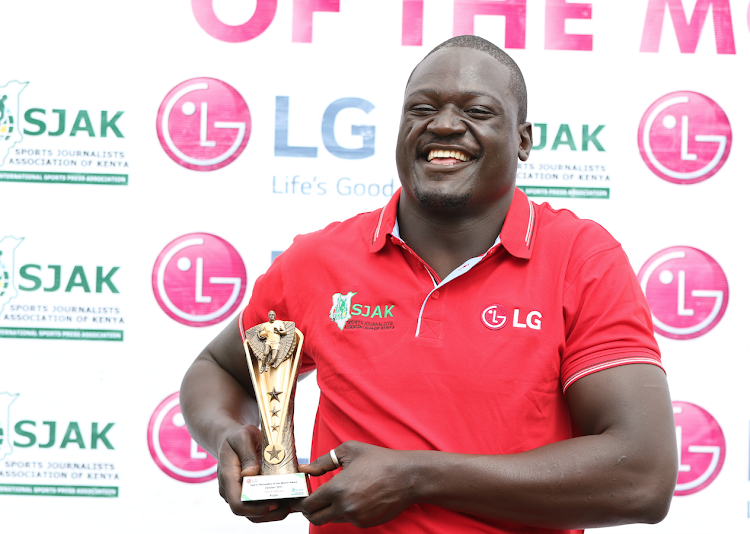 Kenya rugby Sevens star Alvin 'Buffa' Otieno was all smiles on Friday after he was named LG/SJAK Sports Personality for the month of October.

Otieno described the award as a just reward for his persistence and comeback after his previous injury struggles.

"I am short of words, very happy about this award. It's been good to me more so after recovering from injury and seeing my game improve through and through," the Kenya Commercial Bank player said.

The Kakamega High School alumnus has been the highlight of Kenyan rugby in 2021, most notably, leading Shujaas to last month's Safari Sevens title at Nyayo Stadium during which he was named Most Valuable Player.

In the final against Germany, he scored the opening try as the hosts ran out 12-5 winners to claim the title last won by another Kenyan team, Morans, in 2019.

Despite his achievements thus far, the tough-tackling man believes there is more to come from him and his teammates.

"The sky is the limit for now and I also urge all players to keep going and aim higher in sport,” Otieno, who made his bow for the national team in 2016 in Hong Kong, said.

Speaking at the same event, LG East Africa Business Manager Paul Mumo said Otieno's win is a sign of the diversity of sporting talents in the country.

"We congratulate Alvin and wish him the very best in his future endeavours. I also salute the Shujaas for their achievements and making Kenyans proud. The award celebrates talented Kenyan sportsmen and women for their accomplishments,” Mumo said.

In second place was motorsport veteran Carl Tundo who clinched the  African Rally Championship (ARC) after leading a 1-2-3 finish at the Rwanda Mountain Gorilla Rally.