•A  veteran of 12 HSBC World Rugby Sevens Series (2004-16), Kayange, along with his brother Collins Injera, were the mainstay of the Kenyan team revered for its strength and athleticism.

•He finished his career on the World Series as Kenya’s third highest points scorer in Sevens with 799 points and 159 tries. 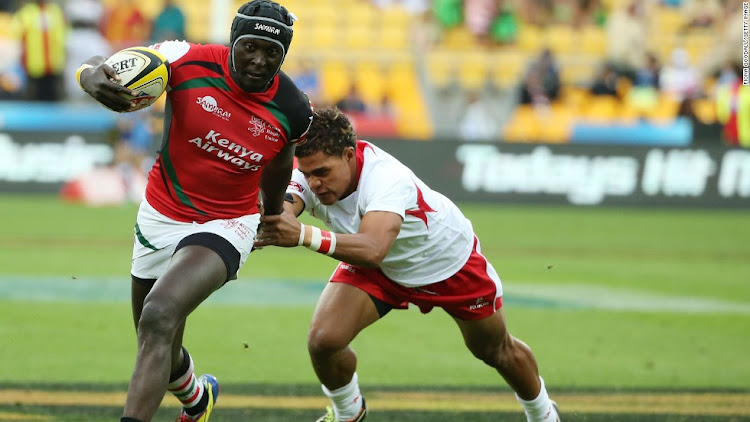 Former Kenya Sevens skipper Humphrey Kayange in a past match

Former Kenya seven skipper Humphrey Kayange has been inducted into the World Rugby Hall of Fame.

Popularly known as Tall, Kayange played an instrumental role in pushing for the sport to be included in the Olympics in Rio 2016.

A  veteran of 12 HSBC World Rugby Sevens Series (2004-16), Kayange, along with his brother Collins Injera, were the mainstay of the Kenyan team revered for its strength and athleticism.

A Masters graduate in Chemistry by profession, Kayange helped Shujaa reach two Rugby World Cup Sevens semi-finals in 2009 – the same year he was nominated for World Rugby Sevens Player of the Year —and again in 2013.

He also appeared at two Commonwealth Games (2010 and 2014) and was a member of the team that won Kenya’s first-ever World Series Cup title in Singapore in 2016.

He finished his career on the World Series as Kenya’s third highest points scorer in Sevens with 799 points and 159 tries. In 15's, he scored four tries in 12 tests as a hard-running centre.

Others, who have been inducted  include Fijian Olympic Rugby winning Sevens captain Osea Kolinisau, former England Rugby captain Will Carling and Manuel-Carpenter, who  won silver with New Zealand as rugby sevens made its Olympic debut in Brazil. Former Scotland international and coach Jim Telfer and Australia's Chery Mcfee were the other inductees.

World Rugby chairman and Hall of Fame inductee No.94 Sir Bill Beaumont said: “On behalf of WR, I would like to congratulate our six Hall of Fame inductees, who did not just make their mark on the field of play, but also played a significant role in advancing the sport.

“In this Olympic year, we are recognising those who have all played a significant role in cementing rugby as an Olympic sport. Their contributions should not be underestimated in terms of the global growth of rugby. We are also acknowledging the contributions of those who have left their mark on the oldest international fixture in the game."

"Each of them have been outstanding players in either sevens or 15s and they have also been important contributors to rugby, in their own countries and globally, off the field."

“As chair of the selection panel, I am so proud that the World Rugby Hall of Fame is able to recognise such worthy inductees, who have inspired generations of rugby players and fans through their many noteworthy achievements.”