Test spots up for grabs as All Blacks face US Eagles

Saturday’s game launches a hectic end-of-season schedule for New Zealand, who will head to Europe to face Wales, Italy, Ireland and France on consecutive weekends. 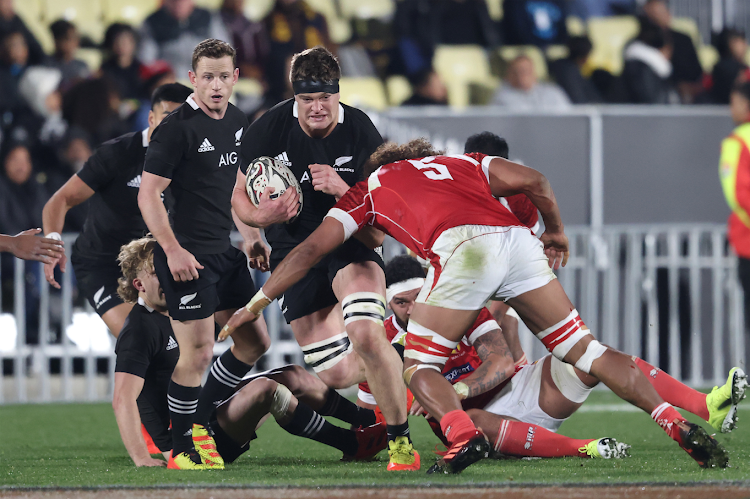 Scott Barrett of New Zealand (C) is tackled during the rugby Test match between the New Zealand All Blacks and Tonga in Auckland on July 3.
Image: AFP

New Zealand coach Ian Foster says Test spots will be up for grabs when an experimental All Blacks line-up kick off their northern hemisphere tour against the United States in Washington on Saturday.

Foster has made 14 changes in personnel from the team beaten by South Africa in the finale to the Rugby Championship earlier this month for this weekend’s one-off game against the Eagles at FedEx Field, home of  NFL’s Washington Football Team.

Saturday’s game launches a hectic end-of-season schedule for the All Blacks, who will head to Europe to face Wales, Italy, Ireland and France on consecutive weekends after leaving the US.

Foster said Thursday individuals named to Saturday’s starting XV have the chance to force their way into his plans for the European leg of the tour.

“I won’t go into specifics, but there’s a clear opportunity for everyone,” Foster told reporters on a video call. “We’re coming in off a loss that hurt. We’re clearly favourites but what’s important for us is the quality of our game.

“By the end of the game we need to make sure that our performance is at the right level. By doing that there will be individuals who put their hand up.”

Saturday’s Test marks the third time the All Blacks have played a game in the United States in recent years. In 2014, New Zealand thumped the US Eagles 74-6 at Chicago’s historic Soldier Field. Two years later, the All Blacks returned to Chicago and were beaten 40-29 by Ireland in an epic one-off Test.

Even for the All Blacks untested starting line-up, anything other than a comfortable New Zealand victory on Saturday would be a major surprise.

Foster however has warned his players to expect a backlash from an Eagles team still smarting from a defeat to Uruguay earlier this month that saw them fail to secure an automatic berth to the 2023 World Cup in France.

“They’ll be stung from that,” Foster said. “If you looked at a couple of their performances in July they were very, very competitive. “They’ll be disappointed with that. And the chance to play in their own country in a pretty special stadium that they don’t normally play in,  in front of a big crowd, is very much a motivating factor.

“We’re expecting an invigorated Eagles team that will carry hard and play with commitment, which you kind of expect from the States. I think they’ll be really combative in that space.”

Long-term skipper Sam Cane, who is part of the touring squad, was not considered for the captaincy in order to concentrate on form and fitness. Cane is on the bench for Saturday’s Test. Foster said Cane was “100 per cent behind” the decision.

Saturday’s match meanwhile comes just days after the United States formally unveiled a bid to host the men’s World Cup in either 2027 or 2031, and the women’s World Cup in 2029, giving the sport exposure on a national stage.