A string of key players were absent or rested

•Some fringe All Blacks had their chance to shine, with number eight Luke Jacobson grabbing two second half tries and recalled winger Sevu Reece scoring one in the first half of a menacing display.

•"We're incredibly proud of that performance to keep them at zero defensively and then we had to really break them down," — Brodie Retallick 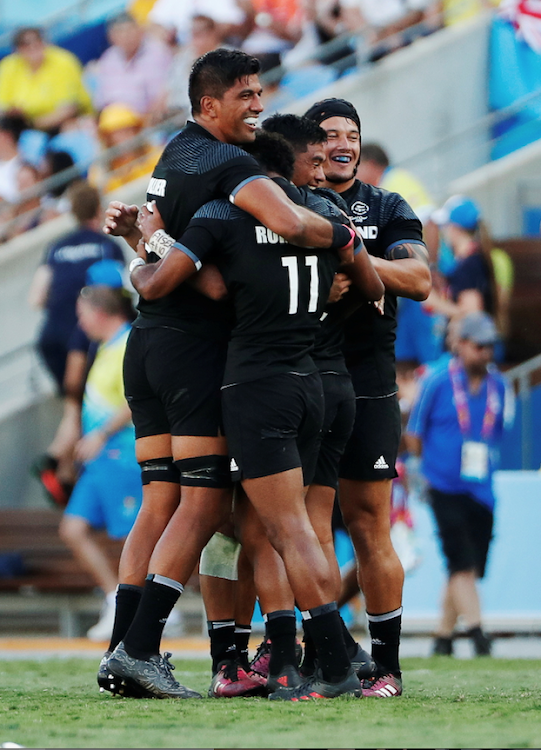 New Zealand's players celebrate during a past match
Image: /FILE

New Zealand blended set piece dominance with stonewall defence to trounce an undisciplined Argentina side 39-0 and claim their third successive win of a perfect Rugby Championship campaign on the Gold Coast on Sunday.

With a string of key players absent or rested, some fringe All Blacks had their chance to shine, with number eight Luke Jacobson grabbing two second half tries and recalled winger Sevu Reece scoring one in the first half of a menacing display.

Utility back Rieko Ioane and flanker Dalton Papalii also had tries in the opening stanza as the relentless All Blacks recorded their third bonus point win after thrashing Australia at Eden Park and in Perth.

"We're incredibly proud of that performance to keep them at zero defensively and then we had to really break them down," stand-in captain Brodie Retallick said.

"We found a lot of space with the Wallabies the last few weeks but we had to wear (Argentina) down at set piece and with our carries. "There will be things to work on and get a little bit tighter but we can be proud of that great effort."

The Mario Ledesma-coached Pumas gave up a yellow card in each half and have now failed to score in two successive tests against the All Blacks, following the 38-0 defeat in last year's Tri-Nations.

Winless after two opening defeats to South Africa, they have only six days to turn things around before another All Blacks test.

"We must see what we have done wrong ... Now I think we must be hard on ourselves."

All Blacks coach Ian Foster made six changes to the starting 15 that hammered the Wallabies 38-21 in Perth, and was forced into another late change, with Ioane slotting in to replace Anton Lienert-Brown after the centre was a late withdrawal with a hamstring strain.

The rejigged side struggled for cohesion early but gelled superbly after the half-hour mark.

Ioane landed the first blow in the 10th minute with a touch of fortune.

A stray Pumas hand knocked a Beauden Barrett pass into his toe and he followed the ricocheted ball over the line for one of his easiest tries.

Dogged defence and uncharacteristic errors kept the All Blacks at bay for 20 minutes until the Pumas' resolve crumbled.

A powerful lineout drive ended up with Reece burrowing under a ruck for the All Blacks' second try three minutes from the break.

Suddenly 15-0 up, the men in black pushed again, winning a penalty in front of goal after the halftime siren.

Barrett kicked for the corner rather than take the shot and another bout of pressure saw Argentina reduced to 14 with blindside flanker Pablo Matera given a yellow card.

Less than a minute later, flanker Papalii rumbled over in a maul for the All Blacks' third try and the New Zealanders went to the break with a 22-0 lead.

A moment of brilliance from Barrett gave the All Blacks their fourth try and bonus point six minutes after the restart as the flyhalf skipped through a gaping defensive hole, shrugged off two defenders and flung the ball wide to Jacobson who thundered over the line.

Foster's forwards ramped up the set piece pressure late on, with Jacobson crossing for his second try from the back of a scrum in the 68th minute to cap another powerhouse performance by an understrength All Blacks team. (Reporting by Ian Ransom; Editing by Pritha Sarkar)