Barca had a comfortable evening away to third-tier Ceuta, while Real Madrid had to dig deep in Villarreal, coming back from 2-0 down before winning 3-2.

• Dani Ceballos won the game for Madrid with a smart finish after good work from Marco Asensio, who pulled the ball back for him to score from the edge of the area. 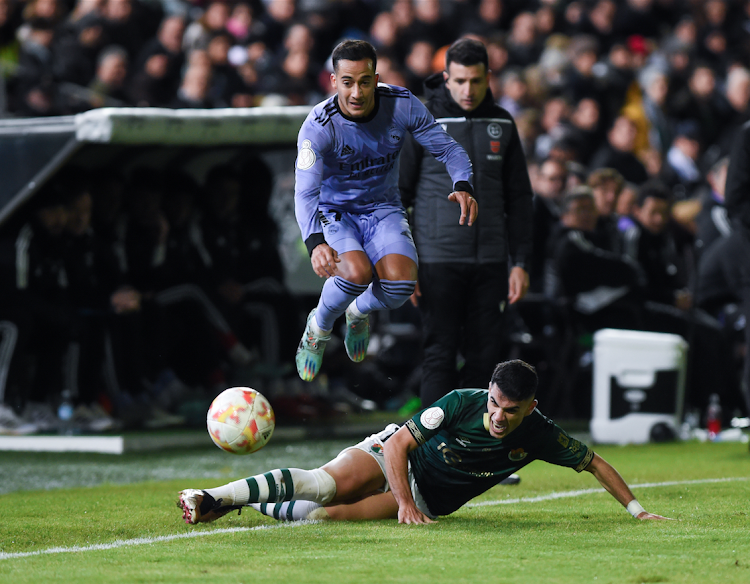 Real Madrid's Lucas Vazquez (17) vies for the ball with Carmelo Merenciano of CP Cacereno during a Copa del Rey round of 32 match on January 3
Image: XINHUA

Barcelona and Real Madrid on Thursday completed the draw for the quarterfinals of the Copa del Rey with wins away to Ceuta and Villarreal.

Barca had a comfortable evening away to third-tier Ceuta, while Real Madrid had to dig deep in Villarreal, coming back from 2-0 down before winning 3-2. Villarreal dominated the first half, with Etienne Capoue putting them ahead in the fourth minute after an assist from Gerard Moreno.

Samuel Chukwueze doubled Villarreal’s lead three minutes from time as Villarreal caught Madrid on the break and Moreno gave another assist. The game changed after the break and Madrid were level with goals in the 57th minute from Vinicius Jr, who produced a composed finish under pressure from the defense.

Eder Militao leveled in the 69th minute, following up to sweep home the rebound after his initial header had been saved. Dani Ceballos won the game for Madrid with a smart finish after good work from Marco Asensio, who pulled the ball back for him to score from the edge of the area.

Barcelona never looked to be in danger of suffering an upset in Ceuta as the newly crowned Spanish Supercup champions controlled the ball, but it wasn’t until the 40th minute that Raphinha put them ahead.

The Brazilian took a pass from Frank Kessie to score with a curling left-foot shot out of the keeper’s reach.

Robert Lewandowski made the tie safe four minutes into the second half with a clinical low finish after another assist from Kessie.

Ansu Fati scored a third with just over 20 minutes left to play and Kessie headed the goal that he deserved in the 76th minute, with Barca giving a class in effective finishing.

Lewandowski scored his second of the night and his 22nd of the season in the last minute after a pass from Eric Garcia, following the defender’s strong run out of defense.

The teams, top and second in La Liga, play on Sunday with Barcelona at home to Getafe while Real Madrid have a difficult trip to play Athletic Bilbao.
Sports
2 weeks ago

Real Madrid have hardly had time to lick their wounds and recover tired legs before they travel to Villarreal for what looks like the toughest tie of ...
Sports
2 weeks ago

Felix, 23, is aware and confident of his potential, wants that to be respected and wants the team to adapt to his strengths.
Sports
3 weeks ago

Real Madrid are clear favourites to go through against Valencia despite their 2-1 defeat in Villarreal on Saturday.
Sports
3 weeks ago
Post a comment
by XINHUA
Football
20 January 2023 - 11:40
Read The E-Paper