With the championship heading into Round 10, Nzoia are second on the log with 18 points, one adrift of the champions.

• Nzoia enter their next fixture high on confidence after putting together convincing victories over tough opponents on the top-flight stage. 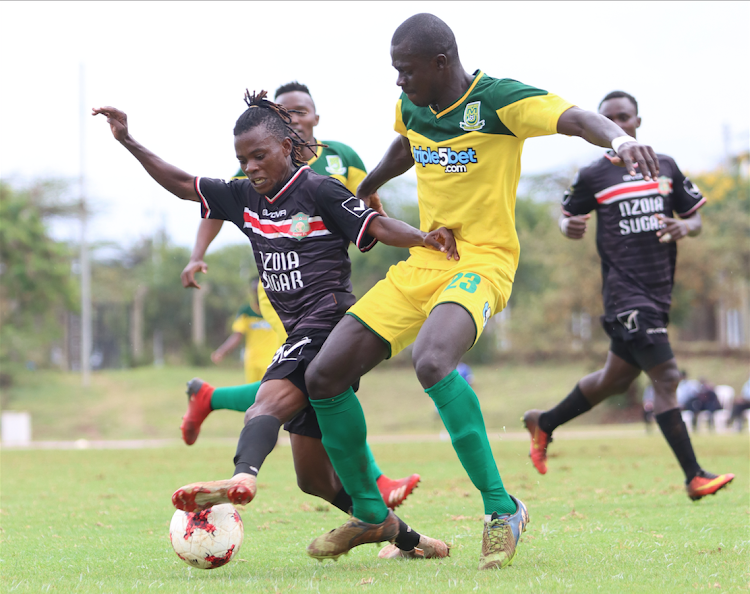 Nzoia Sugar head coach Salim Babu believes his team can dethrone Tusker from the top of the Kenyan Premier League table as title contention heats up.

With the championship heading into Round 10, Nzoia are second on the log with 18 points, one adrift of the champions.

Babu has urged his players to maintain their winning attitude to keep their dream for a maiden title alive.

Coach Babu is now convinced taking firm command of the proceedings in the first half of the season is a reality.

“We already set the pace in our opening games of the season. I think we can maintain our momentum and finish in a good spot in the first half of the season, if we maintain the spirit,” Babu stated in an exclusive interview on

He said his charges won’t settle for anything less than a victory when they dare Wazito at Sudi Stadium on Wednesday.

“I keep telling the boys to put in a lot of effort and make the most of every game. We have always entered the league as underdogs and we are determined to change the narrative this season,” Babu said.

Nzoia enter their next fixture high on confidence after putting together convincing victories over tough opponents on the top-flight stage.

They were as brilliant in their most recent game, where they secured an away point against Tusker at Ruaraka Complex on Saturday.

Babu believes that the successful run has inspired his talent-laden squad and additional victories will provide the ideal circumstances for them to push for their first championship title.

In other matches scheduled for Wednesday, Bidco United will clash with Kakamega Homeboyz at Moi Stadium Kasarani Annex.

AFC Leopards will look to end their poor run when they face Mathare United at Nyayo Stadium, Nairobi.

Ulinzi Stars face an acid test against Bandari at Ulinzi Sports Complex in Nairobi while Posta Rangers have a date with Kenya Police at Moi Stadium, Kasarani Annex.

Tusker will look to consolidate their position at the summit of the log when they host Talanta at Ruaraka Grounds, Nairobi.

Things, however, went south in Mombasa a fortnight ago, where they suffered their first loss of the season against Bandari at Mbaraki Sports Club.
Sports
1 week ago

• Zoo Kericho, a previous member of the Kenya Premier League, is the team most adversely impacted, with six of their former players making the list.
Sports
1 week ago

Mathare earn first point of the season in draw with Posta

Cavin Odongo scored for Posta Rangers in the 39th minute, but Chris Owino equalized for the Slum Boys in the 65th minute to secure the crucial point.
Sports
2 weeks ago

A contentious court ruling derailed Seal's promotion bid and turned their lofty goals into a nightmare
Sports
1 week ago
Post a comment
by TONY MBALLA
Football
18 January 2023 - 05:00
Read The E-Paper