• Spurs, so poor in the first half, did have their chances but found visiting keeper Aaron Ramsdale in top form.

• He saved twice either side of half-time from Harry Kane and also denied Ryan Sessegnon's angled effort. 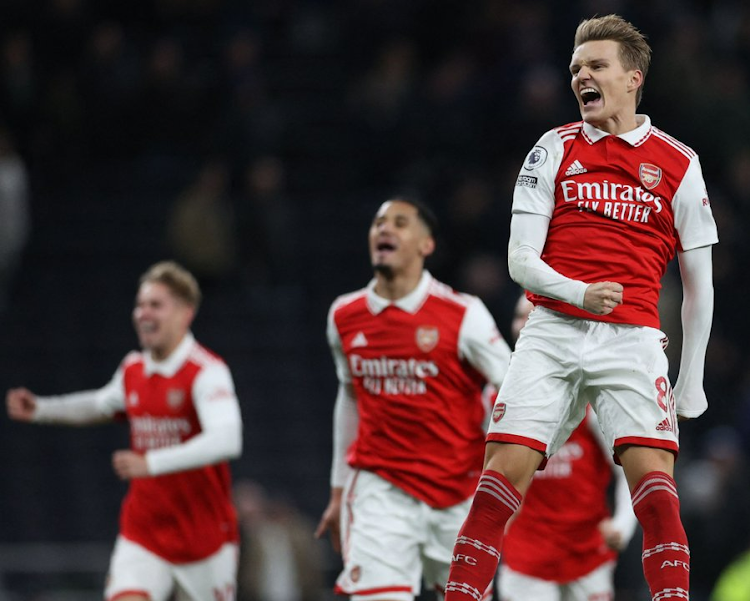 Martin Odegaard celebrates with team mates after scoring to give Arsenal a two-goal lead before the break in their North London derby against Tottenham Hotspurs, January 15, 2023.
Image: ARSENAL

Arsenal extended their lead at the top of the Premier League to a formidable eight points with an outstanding performance and win in the north London derby at Tottenham.

The Gunners took full advantage of Manchester City's loss at Manchester United on Saturday with an impressive show of style in the first half and steel after the break to claim a vital three points.

Arsenal were helped by a blunder from hapless Spurs keeper Hugo Lloris when he fumbled Bukayo Saka's cross into his own net after 14 minutes, but it was no more than Mikel Arteta's side deserved as captain Martin Odegaard drilled in a second from outside the area nine minutes before the break.

Spurs, so poor in the first half, did have their chances but found visiting keeper Aaron Ramsdale in top form as he saved twice either side of half-time from Harry Kane and also denied Ryan Sessegnon's angled effort.

Arsenal were handed a huge opportunity to take a stronger grip on the title race after closest rivals Manchester City were beaten at Old Trafford, but with the expectation also came pressure in the hothouse of a north London derby.

The Gunners, as they have so often this season, rose to the challenge by over-running Spurs to take control in the opening 45 minutes, then hold their nerve in the face of an expected rally from Antonio Conte's men after the break.

Arsenal were simply irresistible in the first half as they outclassed Spurs - the own goal from Lloris and captain Odegaard's strike scant reward for their vast superiority.

And the visitors showed they were prepared to do the dirty work when Spurs tried to mount a recovery. Keeper Ramsdale was outstanding and his defenders prepared to throw themselves in front of everything to protect the lead.

There was some ill-feeling and ugly scenes at the end when Ramsdale and Richarlison had a flare-up, before a Spurs fan appeared to aim a kick at the England keeper.

Arsenal's players were eventually ushered away to enjoy their thoroughly-deserved celebrations with their own ecstatic supporters.

Spurs may have created chances and moments of anxiety for Arsenal, especially in the second half, but this was a sobering game for Conte and his players as they looked well off the pace until it was too late.

They were trailing once again at half time for the ninth time this season, the seventh in the Premier League, after a first period in which their mediocrity was a sharp contrast to the excellence of their rivals.

Spurs have made a habit of slow starts and occasionally been able to dig themselves out of the hole, but they left themselves too much to do against this super-confident Arsenal outfit.

Kane was attempting to equal Jimmy Greaves' record of 266 goals for Spurs, but found Ramsdale at his best. At the other end, though, Lloris produced yet another of those errors that happen far too often to a goalkeeper of his reputation.

Saka's cross took a deflection of Sessegnon but the French keeper had to do so much better than just let the ball drop behind him into his own net.

It summed up Spurs' first-half display and they remain in fifth place, five points behind Manchester United in the Champions League places having played a game more.

City looked to be closing the gap on Premier League leaders Arsenal.
Sports
3 weeks ago

Was Bruno Fernandes’ equaliser a ‘joke’ or ‘intelligent’?