The midfielder said he will take time to reflect on his future before he decides on his next move.

•The towering midfielder leaves Tusker after only 15 months with the club, having joined from AFC Leopards in September 2021. 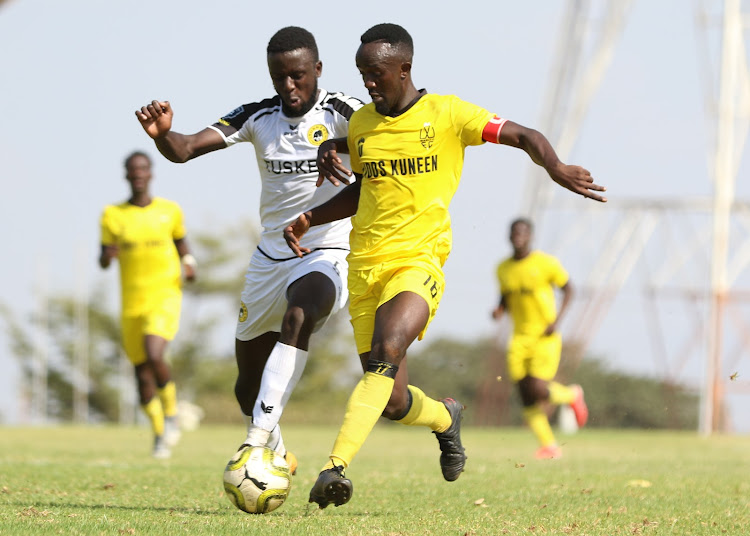 Tusker's Clyde Senaji (L) fights for the ball with Elli Asieche of Wazito during a past match
Image: FILE

Matano is confident that his talent-laden squad will provide an adequate replacement for the veteran midfielder.

"Clyde was a key member of our squad and his services will be missed. However, we have some good players in the squad who can compete for the title," Matano said.

The reigning Kenyan Premier League champions brought the development to light in a statement on Thursday.

"After discussions with management, Clyde Senaji has agreed to leave the club on mutual terms."

In part, the statement was read."Senaji returned to the team on a two-year contract in September 2021. His most recent appearance for the team was against Bidco United, where he scored the game-winning goal."

The towering midfielder leaves Tusker after only 15 months with the club, having joined from AFC Leopards in September 2021.

Besides featuring for the brewers in CAF Champions League and CAF Confederation Cup matches, Senaji was part of the squad that clinched the 2021/22 title season that was later nullified by the Football Kenya Federation.

The midfielder said he will take time to reflect on his future before he decides on his next move.

"I can confirm that I am no longer a member of Tusker FC. The decision was mutual, and I'd like to thank the club for the opportunity, and I wish them well for the rest of the season "Senaji told the media.

" I can't talk about my future right now, but I believe things will become clearer in the coming weeks, most probably in February, when the new transfer window opens. At the moment, I'll take some time off and stay fit on my own while I wait for my next job," Senaji said.

Despite the setback, the brewers will look to rebound from their 2-0 loss to Bandari last Sunday when they face Nzoia Sugar in a top-of-the-table clash at Nairobi's Ruaraka Stadium.

Tusker lead the KPL log with 18 points after seven league matches while the Bungoma-based millers follow closely with 15 points.

In other matches set for Saturday, Wazito will host AFC Leopards at Muhoroni Stadium, Kisumu while Talanta will be at home against Mathare United at Moi Stadium, Kasarani Annex in Nairobi.

KCB have a date with city rivals Kariobangi Sharks while Kenya Police and Ulinzi Stars will settle scores at Moi Stadium, Kasarani.

Nairobi City Stars will hope to end their six-match winless streak when they face Sofapaka at Kasarani. Vihiga Bullets will clash with Bandari at Bukhungu in the only league fixture scheduled for the day.