•Nathan Jones has been in charge of Southampton for seven matches, winning all three cup ties and losing all four Premier League games.

•Southampton have now been handed a semi-final meeting with Newcastle United as they close in on an unlikely Wembley appearance, given their struggles this season. 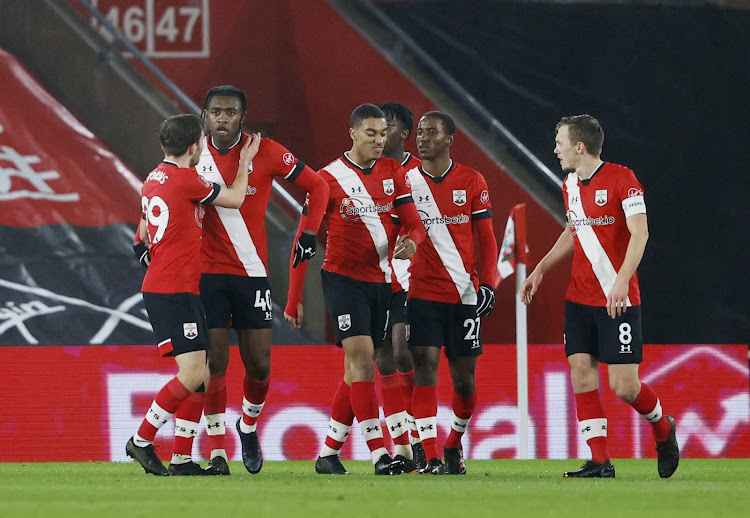 Southampton's Fraser Forster celebrates with teammates after scoring in a past match
Image: FILE

Nathan Jones' approval rating as Southampton manager has barely risen above zero since his arrival on the south coast from Luton Town in November.

Greeted with a discernible wave of indifference by Saints supporters following his appointment, the sight of almost 10,000 empty seats at St Mary's for an EFL Cup quarter-final against Manchester City was a gauge of the current mood around the club.

Jones has lost his first four Premier League games in charge and when Southampton went a goal behind in the FA Cup third-round tie at Crystal Palace at the weekend, the visiting support questioned the validity of his methods and quality of football in what can be politely described as graphic and robust terms.

Southampton went on to win, of course, but it is a sign of the instant demands for success heaped on a new manager that someone who only took over in November was regarded by some as a serious candidate for the sack in early January.

And so it was, with football's glorious capacity for surprise, that Jones and Southampton turned form and logic on its head in the EFL Cup quarter-finals as the Premier League's bottom club thoroughly deserved to unseat the reigning champions and competition favourites by a 2-1 margin.

Southampton have now been handed a semi-final meeting with Newcastle United as they close in on an unlikely Wembley appearance, given their struggles this season.

To describe the mood among those with a Southampton favour before kick-off as pessimistic would rank as a masterpiece of understatement.

And while a victory of this importance does not mean it is time to start serving up large helpings of humble pie, Jones certainly deserved his celebration on the pitch and the warm ovation he received going down the tunnel, as he can now contemplate an EFL Cup semi-final.

Jones only has cup wins to his name since his appointment but this result must act as a turbo-charge to confidence before a crucial league game against fellow strugglers Everton at Goodison Park on Saturday.

He has clearly been wounded by the criticism so was clearly delighted as he said: "I'm really proud of the players, of myself and the coaches.

"We've gone through a lot recently, people questioning lots of things. That goes a little way to justifying why we're here and what team we're trying to create.

"We were excellent. It's been building. I've had three Premier League games and I only had one day to prepare for Liverpool.

"I'm not (magician) David Blaine. I understand people's frustrations but we're building. Rome wasn't built in a day - we're on the way."

The beef about Jones from Saints' following has been a perceived over-reliance on the long ball and the home loss to Nottingham Forest, when they failed to even muster a shot on target, has been a particular bone of contention among fans.

What a contrast this was as Southampton displayed all the qualities Jones insists are the hallmarks of his side, namely aggression and intensity matched with fierce pressing.

There was quality in the goals too, Sekou Mara clipping a crisp finish past Stefan Ortega before Moussa Djenepo displayed confidence and audacity to spot City's keeper Stefan Ortega inexplicably out of position off his line to lift a long-range finish over his head in front of disbelieving Saints fans.

Even with the two-goal interval lead, there was always the lingering fear among Southampton followers that City would do what they have done so many times before and turn this game on its head.

Pep Guardiola attempted to inject life into City as Kevin de Bruyne and Erling Haaland were sent on but even though Argentina World Cup winner Julian Alvarez had a couple of presentable chances that he was unable to take, there was never a moment when Southampton were under siege.

Jones was in vibrant mood after the victory and who can blame him? He has had to listen to tough judgements on his work since coming to St Mary's so the manner of the performance and such a statement result against elite opponents such as Manchester City, and one of the game's managerial greats in Guardiola will do wonders for self-belief on and off the pitch.

It is, as Jones stated, just the start but this will give those who question his credentials food for thought and also offer Southampton's players confidence in what the 49-year-old Welshman can bring.

This must be a platform for Jones and Southampton. The goodwill won here will quickly evaporate if they do not repeat this showing at Everton.

It was a filthy night on the south coast as driving rain and high winds lashed St Mary's but as the cheers rang out at the final whistle, maybe it was also the night when the first shafts of light poked through for the previously beleaguered Southampton manager.