This was a chance to secure qualification after two games

•The attacking verve, creation and goals that illuminated the 6-2 triumph against Iran in their opening World Cup game were replaced by an England side lacking ambition and drive in a performance so devoid tempo and urgency that at times it almost ground to a halt. 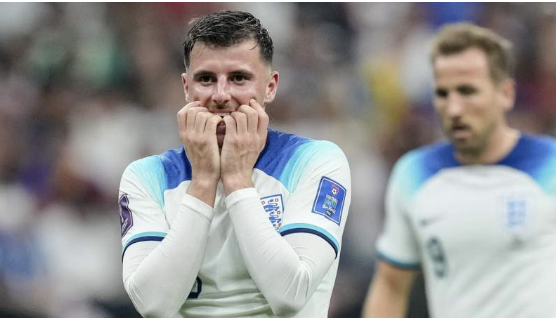 England turned the clock back to the dismal days of summer as their laboured style returned, along with the jeers from supporters, following the undistinguished draw with the USA at Al Bayt Stadium.

The attacking verve, creation and goals that illuminated the 6-2 triumph against Iran in their opening World Cup game were replaced by an England side lacking ambition and drive in a performance so devoid of tempo and urgency that at times it almost ground to a halt.

And as the final whistle sounded, fans who revelled in the free-flowing style that demolished Iran made their feelings clear by delivering a loud and resounding raspberry in the direction of Gareth Southgate's players.

Perspective is needed within the context of group games at the World Cup, indeed any major tournament and England remain in a strong position to go through to the last 16 before their final game against Wales.

But this was a chance to secure qualification after two games were missed and an element of jeopardy remains.

A quick jog of the memory reminds us that England suffered a similar fate of a goalless draw in their second group game of Euro 2020 against Scotland at Wembley and still went deep into that tournament. Here they at least avoided a defeat they could not have complained about given that USA were the better team.

England are still in a good place within Group B but no-one can seriously kid themselves that this was anything other than a very poor performance that is hardly likely to have the bigger names out here in Qatar having sleepless nights.

This was a grim echo of the England that ended their Uefa Nations League campaign with relegation after a summer when they lost 1-0 away then 4-0 at home to Hungary in June before following it up with defeat in Italy and a draw at home to Germany in September.

If the trouncing of Iran suggested Southgate had taken the handbrake off England then this was reverting to type, pedestrian and conservative.

There must be serious concerns at the manner in which USA were able to run through England's midfield into space in front of the defence, along with the constant problems they caused down the left side of Southgate's team, especially in the first half.

England were grateful for Weston McKennie's awful miss, a skied effort right in front of goal, and a moment of good fortune when man-of-the-match Christian Pulisic's powerful effort rattled back off the woodwork with goalkeeper Jordan Pickford beaten in the first half.

Southgate's side had no control in midfield, where Jude Bellingham could not repeat his high-class work against Iran. Indeed he was replaced by the experience of Liverpool captain Jordan Henderson after 69 minutes as Southgate attempted to restore a semblance of order to what was becoming an increasingly hazardous situation.

England's stodgy play looked to be crying out for the introduction of Manchester City's Phil Foden and a touch of the X Factor, but Southgate preferred his team-mate Jack Grealish and the Henderson shield.

In the end, England appeared grateful to get out of the Al Bayt Stadium with a point, still on target for their first World Cup destination of qualification from the group and satisfied they were not punished for such a disappointing effort with defeat.

'Maguire the one shaft of light'

Avoiding defeat was thanks, in large part, to the defensive performance of Harry Maguire, who was outstanding and stood tall throughout, especially when England came under sustained pressure and a succession of corners in the second half.

Southgate's decision to keep faith with Maguire has been subjected to perfectly reasonable scrutiny given the Manchester United captain's club form has been so poor over a lengthy period that he has been largely surplus to requirements for new manager Erik ten Hag after his start to the season.

The England manager's reasoning and faith is based on Maguire's reliability at major tournaments when they reached the World Cup semi-final in 2018 and the Euro 2020 final.

It is too early to pass final judgement on the success or otherwise of Southgate's decision but even those of us who have been critical of Maguire must recognise his excellence against USA.

He produced a performance filled with towering defensive headers and solid defending that will bolster the confidence that has looked so fragile, especially when he had an unflattering hand in two Germany goals in the 3-3 draw at Wembley in England's final game before the World Cup.

England captain Harry Kane was full of praise for Maguire, saying: "Harry put in a fantastic performance. Whenever he puts the Three Lions badge on it brings out the best in him.

"He had a fantastic game and he did against Iran too. I am really happy for him. He's had some tough moments in the last year or two but he's shown his quality today and it was a really important clean sheet."

Maguire was the one shaft of light around a lot of darkness for England but, as stated, perspective must be the watchword and Southgate can reflect that little harm has been done to their chances of moving into the last 16.

Wales, despite being well beaten by Iran, will be roused as ever by the sight of the long-time football foe and will pose the danger of opponents with nothing to lose so England cannot be complacent.

And there can certainly no complacency if England play as badly as this again. There is still work to be done.