Both teams need to win this match to stand a chance of qualifying to the next level.

•Both teams need to win this match to stand a chance of qualifying to the next level. 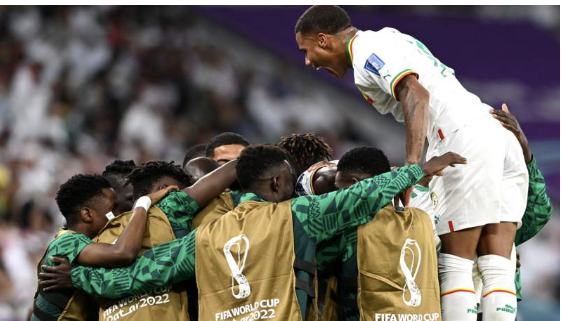 Qatar were much more prominent as an attacking force in the second half.

But, crucially, they only took one of the chances they created inside the Senegal penalty area.

Abdelkarim Hassan goes close for the hosts from a well worked and inventive free-kick, pulling his shot right. If that'd been on target it'd probably have gone in.

Where was all this earlier?

Mohammed Waad and Tarek Salman come on for the hosts to replace Pedro Miguel and Homam Ahmed.

As we were saying.

Would you believe it though. Minutes after coming on, Mohammed Muntari gets onto Ismaeel Mohammad's cross and becomes Qatar's first ever goalscorer at a World Cup.

Senegal surely just need to keep their heads and keep hold of the ball and there'll be home and hosed in this contest thanks to the cushion the Famara Diedhiou's header has given them.

Qatar actually look decent when they get bodies in the box and channel their inner Sam Allardyce/Kevin Davies.

Abdulaziz Hatem comes on to replace Karim Boudiaf for the hosts.

Edouard Mendy, who had a bit of a shocker in Senegal's defeat to the Netherlands has repaid coach Aliou Cisse's faith in him there.

Qatar wing-back Ismaeel Mohammad thought he'd scored as he shins a pacey delivery towards goal from six yards but it Mendy gets down to his right and somehow claws it away.

Krepin Diatta is replaced by Pathe Ciss for Senegal.

Put your foot through it. Almoez Ali finally gets a sniff of goal for Qatar but his effort, which is sneaking towards the bottom left corner, is touched away by the diving Edouard Mendy.

Good save but if that shot had a smidgen more pace I'm not sure he'd have got there.

That goes down as speculative but it's not that far away from Abdelkarim Hassan. The Qatar defender zings one from miles out. It just goes wide but it raises the decibel levels again.

Akram Afif, Qatar's most creative and exciting player so far has come so deep to try and get involved that he is now stood in the right-back position.

Senegal are stroking the ball around with ease now. Zero pressure on the ball.

Qatar's coach Felix Sanchezmight need to look at changing personnel or tactics or both, soon.

So of course they win a free-kick in a decent position and then only stick four or five men in the box with the whole Senegal team back to defend.

Qatar have no choice but to press higher up the pitch now.

It won't be easy, though, as they've been pinned back by Senegal from the first whistle.

Qatar have only had 19 final-third entries compared to Senegal's 46.

Ismail Jakobs picks up a yellow card as well as an assitst. Looks like he caught Qatar's Ismaeel Mohammad with a flailing arm there.

Ismail Jakobs whips the ball in from the right and Diedhiou gets across the near post and arcs his neck to power a header past Meshaal Barsham in the Qatar goal.

The teams are back out. No changes for either at the break as we get under way again.