• Ten Hag intends to use Anthony Martial in a key role after the World Cup following Ronaldo’s departure.

• Arsenal travel to Dubai in December for a warm weather training and Smith Rowe is expected to be part of their squad. 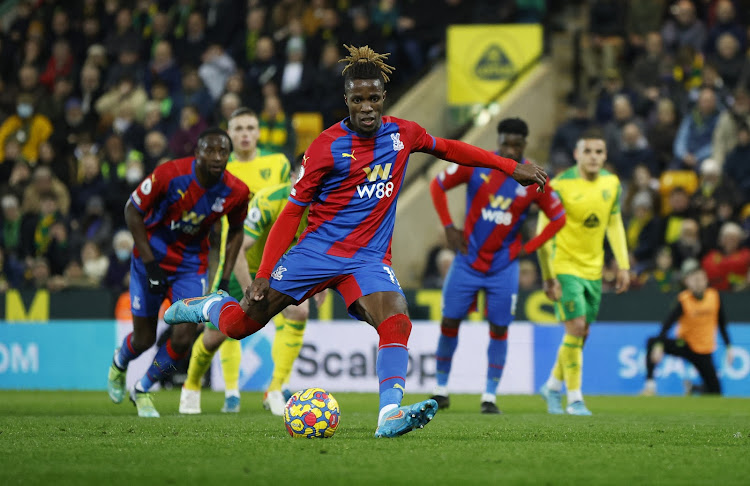 Crystal Palace's Wilfried Zaha takes a penalty during a past match
Image: FILE

Zaha could be the answer for Arteta

Arsenal enjoyed a positive start to the season after completing their plan to strengthen both forward and defensive positions. In order to preserve their top-of-the-table position and push on into 2023, Mikel Arteta has board approval to make more acquisitions in January.

The Gunners need a midfielder and a winger because both Bukayo Saka and Gabriel Martinelli have had to start almost every game and the coach is worried about the pair burning out. Arteta is exploring the possibility of Crystal Palace winger Wilfried Zaha solving his wide area options. Zaha is known to desire a move to a top six club and could be approached in January.

Palace have verbally offered him an increase on his £130k a week wages but have not forwarded this in writing. Much of the Palace success is based on Zaha’s ability and he is one of the most feared opposition wingers in the Premier League, capable of taking on and beating defenders and scoring goals.

Zaha has always supported Arsenal from childhood. Arteta is also aware that his home nation, the Ivory Coast, did not qualify for the World Cup and therefore the winger will be fresh and capable of performing until the end of the season and could easily make a big impact from day one, if he signs.

Where will Ronaldo play next?

Perhaps it was always destined to end in tears but the manner of Cristiano Ronaldo’s departure from Manchester United will be forever a nasty stain on this great club.

When Erik Ten Hag arrived at Old Trafford it was clear the Portugese superstar did not fit in with his vision of the football he wanted the club to play. Ronaldo found himself isolated, left embarrassed on the bench and only given bit parts and he infamously refused to play in one match with only minutes to left on the clock.

His action of leaving that game early and heading off to the car park and going home spelled the end. Ronaldo takes nothing from United in terms of a pay-off and is losing £16million in wages to which he would have been entitled to. I have been contacting clubs to establish who might be interested in signing him.

Chelsea owner Todd Boehly had lunch two weeks ago with Ronaldo’s agent Jorge Mendes and I know the possibility of signing the striker for the Blues was discussed. Coach Graham Potter, however, has told his boss that he does not want Ronaldo. Newcastle has also been mentioned and the club did not deny interest.

Only big Premier League clubs such as Chelsea and Newcastle could afford the 37-year-old’s wages for the next couple of years. Ronaldo wants to play on until he is 40 and is in excellent shape. He hopes the World Cup will highlight his talents once again and draw interest from the major clubs.

I have left the most mouth-watering possibility until last. Paris Saint-Germain are certainly considering the possibility of linking Ronaldo with Lionel Messi and Kylian Mbappe. They are stars who match Ronaldo in status and a link up with players of their quality could go either way… such talent could work for the club giving them the most lethal strike partnership on the planet or the whole thing could implode because of big egos and cause the coach and club huge problems.

Manchester United have at last been put up for sale by the American Glazer brother owners for a staggering £8billion. I will write more on that next week after I visit Manchester and gone behind the scenes.

In the meantime, United have learned a lesson from the disaster surrounding Cristiano Ronaldo. Over the past few years, United have listened to advisors, interested parties and ex-players and managers about which players to sign.

Sir Alex Ferguson and Rio Ferdinand, for instance, both encouraged the signing of Ronaldo and outgoing chairman, at the time, Ed Woodward also claimed to have used his contacts to get the deal done. From now, coach Erik Ten Hag will choose which players he wants to bring into the club and a 37-year-old Ronaldo, even with his exceptional ability, is not what he wants.

The proof is clear because Ronaldo was constantly left out of the side and this caused much of the problem surrounding his sacking. Ten Hag intends to use Anthony Martial in a key role after the World Cup following Ronaldo’s departure.

Ten Hag is working with players who are not appearing at the World Cup and Martial has been discarded by French manager Didier Deschamps. Ten Hag organised a practice match with several youth team players drafted in to make up the numbers.

However, Under-18 upcoming star Dan Gore took things too seriously in a desperate attempt to impress Ten Hag. He harshly tackled Martial, sending him sprawling across the ground. Martial got up and shouted at Gore, pushing him and the two squared up before being pulled apart.

Ten Hag later explained to Gore that during practice games, it is not allowed to make aggressive tackles on senior star players and Gore duly apologised to Martial.

Mason Mount is currently playing for England at the World Cup but back at home, there is uncertainty regarding his future at Chelsea. Mount is out of contract in 18 months and renewal negotiations have been put on hold until after the World Cup.

Liverpool and Juventus have taken note that Chelsea and Mount have been talking since August with no sign of a deal being agreed. Mount is one of the lowest paid players at the club. The two sides will now not meet until January. Mount has been at Chelsea for his entire career and is a Blue through and through.

Chelsea want to keep him but Mount has watched both Reece James and Armando Broja earn new improved deals. Owner Todd Boehly and coach Graham Potter have talked about Mount possibly becoming captain in the future. However, he is not impressed with what is on offer so far.

Chelsea are in a difficult position as they need Mount in their side after losing both Antonio Rudiger and Andreas Christensen on free transfers last summer. Thiago Silva, N’Golo Kante and Jorginho’s contracts expire at the end of this season.

Relax Arsenal fans, Emile Smith Rowe is on the mend. He is planning to return to first team duties in January after suffering a bad groin injury which required surgery. Arsenal travel to Dubai in December for a warm weather training and Smith Rowe is expected to be part of their squad. The 22-year-old will not start training immediately but will join at the end of the trip. He initially felt discomfort in September and it was a joint decision between the club and player for him to undergo an operation.

It is likely that concussion substitutes will be allowed for head injuries during matches. The International Football Association is running a trial period using green cards which can be used to make two head injury substitutions during a game. The trial is being used in 270 competitions and could be permanently introduced in America’s MLS league as early as next March. Temporary substitutions will not be allowed.

Donny Van de Beek enjoyed a successful time under Manchester United boss Erik Ten Hag when they were both at Ajax in the Dutch Eredivise. Since his £40million transfer to United, Van de Beek has not enjoyed much success or consistency.

In their recent match against Real Sociedad, he only touched the ball 19 times and was withdrawn in the 58th minute. However, this week Ten Hag expressed complete support for his young midfielder and said he will soon come good and match his 27 goals in two full seasons at Ajax.

When pressed on whether United might give up on him, Ten Hag said: “Yes, we might but that can’t be now because he had quite a good pre-season. He was injured but is back now and I think he has played and trained very well. I think he can do more and that’s his biggest quality — he can be much more of a threat to an opponent’s goal. I don’t know why it hasn’t worked out for him so far.

No thank you says Pep

Pep Guardiola was busy watching Formula One and was interviewed on the starting grid where he told a TV crew that he was on holiday and did not want to discuss football. That was Sunday and on Monday, he was glued to a TV screen to watch England defeat Iran in one of the opening games.

Guardiola is busy keeping track of Kevin de Bruyne and praying he stays injury-free as Manchester City chase Arsenal after the World Cup. On Wednesday, he signed a new deal to coach City until 2025.

At the World Cup, England players are enjoying a game of darts, video games and use basketball hoops but Brazil prefer to enjoy music from their very own Samba band. When they last won the tournament in 2002, they were accompanied by a samba band.

This time it is the players who are performing with Raphina on tambourine, Real Madrid’s Rodrygo plays banjo, Dani Alves beats the tom toms and Richarlison, according to the other players as a joke, just gets in the way.

Potter has given 19 different players a starting role and used six different formations.
Sports
1 month ago

Chelsea tell me that James will likely be unavailable for approximately eight weeks because of the knee problem he sustained in a Champions League ...
Sports
1 month ago