Both players sustained the injuries during Brazil's 2-0 victory over Serbia.

• Team doctor Rodrigo Lasmar said on Friday Neymar and Danilo had MRI scans and found with ligament damage in the ankle.

• The five-time world champions will meet Switzerland on Monday before concluding their Group G campaign against Cameroon next Friday. 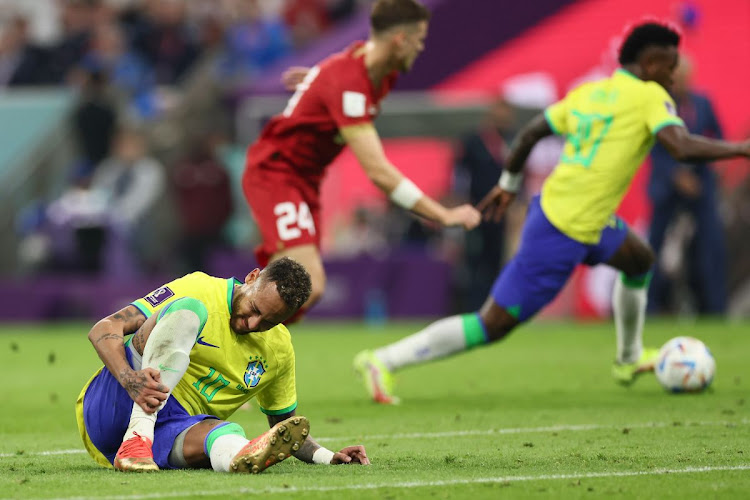 Neymar of Brazil falls down during the Group G match between Brazil and Serbia at the 2022 FIFA World Cup at Lusail Stadium in Lusail, Qatar, Nov. 24, 2022.
Image: XINHUA

Brazilian pair Neymar and Danilo have been ruled out of the rest of the 2022 FIFA World Cup group stage due to ankle sprains, team doctor Rodrigo Lasmar said on Friday.

Both players sustained the injuries during Brazil's 2-0 victory over Serbia in their opening match of the tournament in Lusail on Thursday.

"Neymar and Danilo had an MRI scan this afternoon and we found ligament damage in the ankle of both of them," Lasmar told reporters.

"They will miss the next game for sure and we will be cautious as they will undergo treatment in order to try to get them in shape so they can play again in the World Cup."

The five-time world champions will meet Switzerland on Monday before concluding their Group G campaign against Cameroon next Friday.

Brazil manager Tite played down fears that Neymar's injury was serious after Thursday's match, guaranteeing the Paris Saint-Germain forward would fight through the pain barrier if needed.

While Tite has an abundance of alternatives for Neymar's position, a replacement for Danilo's right-back slot is not so clear.

Tite has used central defender Eder Militao in the position in the past and the manager could also call upon 39-year-old veteran Dani Alves.

Neymar to play at World Cup despite injury