For some football fans, dreams of watching or even attending the World Cup have come true in Qatar.

• The Gulf Arab country’s diversity and inclusiveness have also been compared with some Western countries’ unilateralism and prejudice, while experts and football fans from different countries and regions expressed opposition to racial discrimination against the Middle East.

• A hashtag — “#I am Arab, I support Qatar” — topped Twitter in recent days in most Arab countries as a way to show firm support for Qatar’s hosting of the World Cup, reported BBC’s Arab channel. Lionel Messi of Argentina vies with Hassan Altambakti of Saudi Arabia during the Group C match at the 2022 FIFA World Cup at Lusail Stadium in Lusail, Qatar
Image: XINHUA

The ongoing Fifa World Cup in Qatar has drawn strong support from people in the Middle East, as the host country gave invitations without discrimination, shows respect for different cultures and helps realize lots of football fans’ dreams.

The Gulf Arab country’s diversity and inclusiveness have also been compared with some Western countries’ unilateralism and prejudice, while experts and football fans from different countries and regions expressed opposition to racial discrimination against the Middle East.

A hashtag — “#I am Arab, I support Qatar” — topped Twitter in recent days in most Arab countries as a way to show firm support for Qatar’s hosting of the World Cup, reported BBC’s Arab channel.

After 12-year meticulous preparations, huge stadiums and wide highways were built in the desert, with solar power plants established for achieving “the first carbon-neutral World Cup in history.”

“I strongly support the World Cup being held in the Middle East for the first time in history, which provides an opportunity for us to break the stereotypical thinking towards the region, and show that we are people who love peace and coexistence with others,” Haider Al-Bahrani, an Iraqi engineer, told Xinhua.

To express solidarity and support for Qatar, many leaders in the region attended the tournament’s opening ceremony with some 60,000 football fans at the Al Bayt Stadium, around 50 km north of Doha.

Earlier in November, the 22 members of the Arab League voiced their support for Qatar and “total confidence” in its ability to organize “an excellent edition of this global event.”

Qatari Emir Sheikh Tamim bin Hamad Al Thani extended his invitation without discrimination at the opening ceremony, saying, “From Qatar, I welcome everyone to the World Cup 2022!”

“People of different races, nationalities, creeds and orientations will gather here in Qatar and around screens on all continents to share the same exciting moments,” he said.

The invitation has been accepted by some 1.2 million fans who are expected to visit Qatar, as 95 percent of the tickets have been sold out, according to Qatar-based broadcaster Al Jazeera. Olivier Giroud of France in action against Australia during a Fifa World Cup match at Al Janoub Stadium in Al Wakrah
Image: XINHUA

For some football fans, dreams of watching or even attending the World Cup have come true in Qatar.

Walid Jouda, a 35-year-old football fan born in Iraq and raised in Gaza, had always been aspiring to take part in the World Cup, but his dream once faded away as he did not have a national identity or a passport.

Luckily, life made a surprising turn for Jouda when he was selected as a volunteer with another 27 Gazans to participate in the operation and organization of the event.

“Really, I am still feeling as if I were in a dream. It is as if time had never passed and I was still 12 years old and passionate about football,” he told Xinhua, with a smile.

Shankar Messi, an Indian who has worked as a waiter for eight months in Qatar, also realized his dream of watching a live game inside the stadium, saying that he secured a ticket to one of Tunisia’s games and is still hunting for a ticket for the Brazilian team, his favorite.

“It was the power of sports, the allure of the World Cup!” he told Sports Illustrated, an American sports magazine.

What is more exciting is that for the first-ever time in history, Israeli and Palestinian football fans boarded the same chartered flights from the Israeli city of Tel Aviv to the Qatari capital of Doha for the football festival.

As many as thousands of fans will fly on at least six round-trip flights scheduled during the month-long tournament although Israel and Qatar have not established full diplomatic ties.

Among the stadiums in Qatar, there is a special fan zone set up in the industrial area on the city’s outskirts with giant TV screens for thousands of migrant workers, who piled in to cheer on Qatar on Monday.

Match tickets for the opener cost an average of 200 U.S. dollars, but the industrial fan zone was free, local media reported. 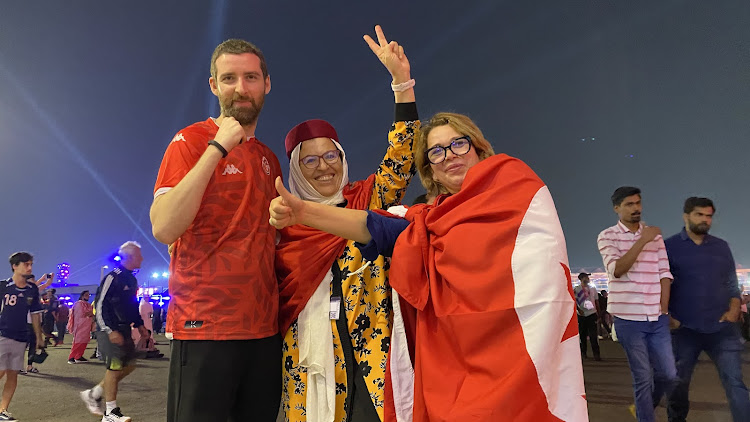 Palestinian poet Mahmoud Darwish once noted that football “represents a breathing space, allowing a splintered homeland an opportunity to join together around something shared.”

However, some Western countries have politicized the games by fabricating a “baseless campaign of defamation” against Qatar over its human rights, said the Arab League in early November.

No matter how much they try to dress up the racism in the garb of morality and humanity, the Westerners’ campaign against the Qatar World Cup reflects their arrogance and racism against Arabs and Islam, Abdul Hassan, a Qatari expert on civilizational dialogue, told Xinhua.

Hassan noted the West holds a monopoly on the tournament with a belief that hosting the World Cup is its right.

It is not human rights that drive these people to campaign against injustice, but an abhorrent culture of racism, Hassan said.

Mustafa Al-Baily, an Egyptian journalist residing in Kuwait, told Xinhua that he is happy to see Qatar react to those “severe and hurtful criticisms” with silence, efforts and smiles.

“As it is said in the old days, they throw stones at him and he throws them with the best fruits,” said Al-Baily, noting that he has observed lots of improvement Qatar has made since 2010 when it won the right to host the World Cup.

“Qatar welcomes everyone,” “gay fans will be welcome to display affection and rainbow flags,” and areas are set up for drunk supporters to sober up, Nasser Al Khater, CEO of the FIFA World Cup Qatar 2022, told Sky News.

With regard to cultural diversity and inclusiveness, the New York Times recently published an opinion, titled “Why the World Cup belongs in the Middle East,” writing that “By contrast, one of the hosts of the next World Cup, the United States, had until recently a ‘Muslim ban’ that would have kept Iranians from being able to watch their team compete.”

Adel al-Baldawi, professor at Baghdad-based al-Mustansiriyah University, told Xinhua that “the West is supposed to change itself first and respect human rights before giving a moral lesson to others. But it violates human rights and gives a moral lesson. This completely contradicts the facts of history.”

“Until now, Qatar has performed successfully,” Ahmed Abdullah Mayouf, a former Libyan football player, told Xinhua. “The Western countries tried to thwart and attacked Qatar’s hosting of the World Cup with its media machine, but it did not work.”

“We are proud that the World Cup is being held in the Middle East, and we will continue our strong support for Qatar,” he said.