Nations were faced with "extreme blackmail", leading them to drop their OneLove armband plans.

•The captains of seven countries, including England and Wales, planned to wear the armband during matches to promote diversity and inclusion.

•But the plans were dropped because of FIFA's threat of players being booked. 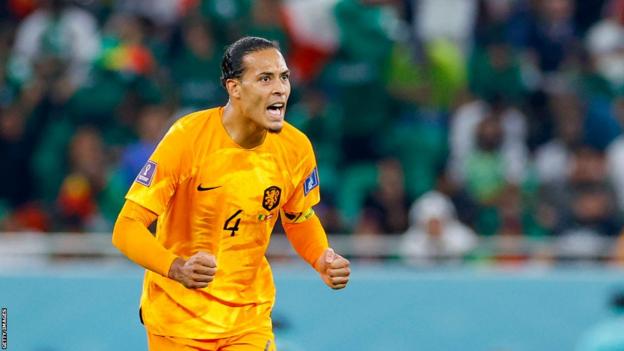 Netherlands captain Virgil van Dijk has hit back at criticism accusing European teams at the World Cup of having no "backbone" after they decided against wearing the OneLove armband.

The captains of seven countries, including England and Wales, planned to wear the armband during matches to promote diversity and inclusion.

But the plans were dropped because of FIFA's threat of players being booked.

The captains are instead wearing FIFA-approved 'No Discrimination' armbands.

"I play in a position where a yellow card is not useful. I became a football player and I want to play these kinds of tournaments," Van Dijk told Dutch broadcaster NOS.

Speaking after the Netherlands' 2-0 win over Senegal on Monday, the Liverpool center-back said: "There are people who say we don't have a backbone, but that's not how it works.

"We just want to play football. I would have loved to play with that band, but not at the expense of a yellow card."

In a statement on Monday, the seven European nations - also including Belgium, Denmark, Germany and Switzerland - said they were willing to pay fines for their captains wearing the armband but could not put their players at risk of being booked.

Speaking after the 6-2 opening win over Iran, England skipper Harry Kane said he was "disappointed" about not being able to wear the armband, while team-mate Jack Grealish said the decision was "a bit stupid".

On Tuesday, the media director of the German football federation (DFB), Steffen Simon, said the seven nations were faced with "extreme blackmail", leading them to drop their OneLove armband plans.

He told German Deutschland funk radio: "The tournament director went to the English team and talked about multiple rule violations and threatened massive sporting sanctions without specifying what these would be."

Simon said the other six teams then decided to "show solidarity" with England.

"We were in an extreme situation, in an extreme blackmail and we thought we had to take that decision without wanting to do so," he said, later adding: "I can understand the disappointment. We had the choice between the plague and cholera."

In Germany, supermarket chain Rewe has suspended its advertising deal with the DFB in a bid to distance itself from FIFA.

Rewe had already told the DFB in October it was ending its partnership but has now done so "with immediate effect" because of Fifa's "unacceptable scandalous attitude".

"We stand up for diversity - and football is also diversity. We live this position, and we defend it," said Rewe Group chief executive Lionel Souque.