Great marker but we must be better, says Southgate

• “It’s a great start but we’re going to have to be better,” England boss Southgate told BBC Sport.

• Meanwhile, Iran goalkeeper Alireza Beiranvand playing on after a clash of heads at the World Cup is “unacceptable”, says ex-England midfielder Jermaine Jenas. 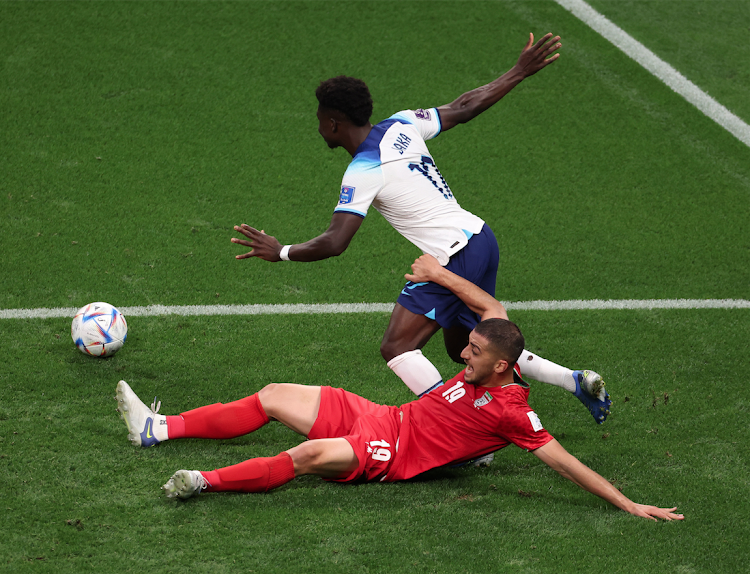 Bukayo Saka of England is tackled by Majid Hosseini of Iran during a Group B match at the Khalifa International Stadium
Image: XINHUA

Gareth Southgate said England “put down a great marker” by thrashing Iran 6-2 in their World Cup opener but “must be better” in their final two group games.

England face USA in their second Group B game on Friday.

“It’s a great start but we’re going to have to be better,” England boss Southgate told BBC Sport.

“To win by that margin — to play as we did for the majority of the game — we’ve got to be really happy. That’s a great marker to put down.

“But we shouldn’t be conceding two goals at that stage of the match and we’ll have to be right on our game against the States.

“We had, I think, 24 minutes of added time across the game, so it’s a long time to focus — but we just lost concentration and when we play at a slower tempo, we’re nowhere near as effective.

“I’m a miserable so-and-so and I should be more excited, but I’ve got to keep the team on the right track and we will have to be better.”

Meanwhile, Iran goalkeeper Alireza Beiranvand playing on after a clash of heads at the World Cup is “unacceptable”, says ex-England midfielder Jermaine Jenas.

Beiranvand received treatment on the pitch for about 10 minutes before trying to play on.

“I don’t see how him carrying on is right. I think it’s a joke,” said Jenas on BBC One’s World Cup coverage. “It’s 2022 and we are having so many discussions about concussion protocols. That’s why these protocols are in place. This is not OK.”

Beiranvand received medical treatment after clashing heads with his own defender in the penalty box, before appearing to tell Iran’s medical team he wanted to play on.

However, he looked visibly dazed and had a bloodied nose, and eventually signalled that he needed to come off.

“Beiranvand shouldn’t be on the pitch now. It’s almost as if he’s been forced to carry on here,” said Jenas. “It’s just really unacceptable. It doesn’t matter how important Beiranvand is to [Iran manager] Carlos Queiroz.”