• Beiranvand received medical treatment after clashing heads with his own defender in the penalty box, before appearing to tell Iran's medical team he wanted to play on.

• However, he looked visibly dazed and had a bloodied nose, and eventually signalled that he needed to come off. 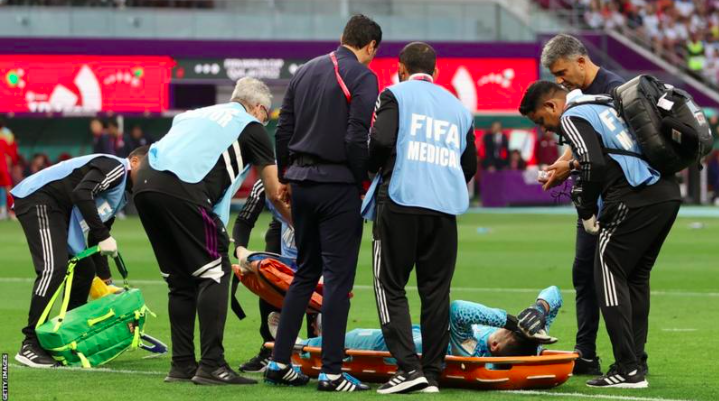 Alireza Beiranvand looked dazed as he tried to carry on, but was eventually carried off on a stretcher and replaced by Hossein Hosseini
Image: GETTY IMAGES

Iran goalkeeper Alireza Beiranvand playing on after a clash of heads at the World Cup is "unacceptable", says ex-England midfielder Jermaine Jenas.

Beiranvand received treatment on the pitch for about 10 minutes before trying to play on during Iran's opening group match against England.

"I don't see how him carrying on is right. I think it's a joke," said Jenas on BBC One's World Cup coverage.

"It's 2022 and we are having so many discussions about concussion protocols. That's why these protocols are in place. This is not OK."

Beiranvand received medical treatment after clashing heads with his own defender in the penalty box, before appearing to tell Iran's medical team he wanted to play on.

However, he looked visibly dazed and had a bloodied nose, and eventually signalled that he needed to come off.

"Beiranvand shouldn't be on the pitch now. It's almost as if he's been forced to carry on here," said Jenas.

"It's just really unacceptable. It doesn't matter how important Beiranvand is to [Iran manager] Carlos Queiroz."

England defender Harry Maguire was quickly taken off after being assessed for concussion in the second half when the Three Lions were 4-1 up.

This is the first time at a World Cup that permanent concussion substitutions have been permitted in addition to the five standard replacements.

Teams are allowed one permanent concussion substitution per match, and a host of new measures have been introduced to improve player safety, including independent assessors at games.

Concussion spotters - experts who can monitor from seats in the stands and identify possible brain injuries that may have been missed - have been introduced. Team doctors also have instant access to video replays.

Former England forward and BBC pundit Alan Shearer said: "Ifab [International Football Association Board - football's rulemakers] are failing the players. This game is being beamed all around the world in front of millions of people.

"They have to bring a temporary substitution rule in because he should be off the pitch or receiving his treatment, then the [substitute] goalkeeper can come on. He can be assessed for 10 to 15 minutes and clearly he was never in a fit state.

"You're never going to get the player saying they want to come off. The players will say they are fine. Quite clearly he was not fine," Shearer added.

"They've even introduced another person - a medical advisor in the stands - to look at video footage and give advice to medics who are on the pitch. What on earth is he doing?"

Matthew Upson, a pundit on BBC Radio 5 Live's World Cup coverage, said: "It seems like a ludicrous protocol that has been followed. How can he continue? It has taken so much time in the game as well and is just slowing everything down."

Luke Griggs, interim chief executive of brain injury charity Headway UK said: "This was the first test of the Fifa World Cup concussion protocol and it was an abject failure."

England’s Dier says it is ‘crazy talk’ to criticise Southgate