The promotion of same-sex relationships are criminalised in Qatar.

• A joint statement from seven football associations said they could not put their players "in a position where they could face sporting sanctions".

• "We are very frustrated by the Fifa decision, which we believe is unprecedented," the statement read. 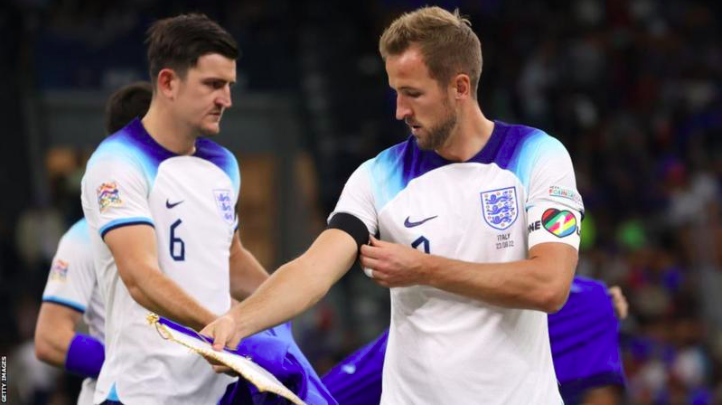 The OneLove armband promotes diversity and inclusion - and is a symbol aimed at standing up to discrimination
Image: GETTY IMAGES

England, Wales and other European nations will not wear the OneLove armband at the World Cup in Qatar because of the threat of players being booked.

The captains, including England's Harry Kane and Gareth Bale of Wales, had planned to wear the armband during matches to promote diversity and inclusion.

A joint statement from seven football associations said they could not put their players "in a position where they could face sporting sanctions".

"We are very frustrated by the Fifa decision, which we believe is unprecedented," the statement read.

The governing bodies - England, Wales, Belgium, Denmark, Germany, the Netherlands and Switzerland - said they had written to Fifa in September informing them about the OneLove armband but not received a response.

"Fifa has been very clear that it will impose sporting sanctions if our captains wear the armbands on the field of play," the statement added.

"We were prepared to pay fines that would normally apply to breaches of kit regulations and had a strong commitment to wearing the armband.

"However, we cannot put our players in the situation where they might be booked, or even forced to leave the field of play."

In response, Fifa has brought forward its own "No Discrimination" campaign, which had been due to start from the quarter-finals. Captains will now be permitted to wear a No Discrimination armband for the duration of the tournament.

Kane wore the Fifa armband when England began their World Cup campaign against Iran on Monday, with the Three Lions also taking the knee before kick-off.

Meanwhile, the Iran national anthem was widely jeered in the stadium, with the country's players refusing to sing.

Human rights activists have said more than 400 anti-government protesters have been killed in Iran and 16,800 others arrested in a crackdown by security forces in recent months.

It was announced in September that the captains of 10 European nations - England, Wales, Belgium, Denmark, France, Germany, Norway, Sweden, Switzerland and the Netherlands - would wear a OneLove armband at Nations League games and the 2022 World Cup in Qatar.

On Saturday, Fifa president Gianni Infantino accused the West of "hypocrisy" in its reporting about Qatar's human rights record.

In a statement, the Dutch FA said it was abandoning the plan to wear the armband "with a heavy heart" following Fifa's decision to impose sanctions.

"This goes against the spirit of our sport that connects millions of people," it added. "Together with the other countries involved, we will take a critical look at our relationship with Fifa in the coming period."

The Football Association of Wales said: "We're frustrated. We're disappointed. But we remain with the belief that football is for everyone and stand with our LGBTQ+ members of the Welsh football family."

Fifa's warning that it would impose sanctions on any captain who wore a OneLove armband has been criticised, with the Football Supporters' Association saying it felt "betrayed" by football's world governing body.

"Today we feel contempt for an organisation that has shown its true values by giving the yellow card to players and the red card to tolerance," it added in a statement.

"Never again should a World Cup be handed out solely on the basis of money and infrastructure.

"No country which falls short on LGBT+ rights, women's rights, workers' rights, or any other universal human right, should be given the honour of hosting a World Cup."

3LionsPride, an England fan group for LGBTQ+ supporters, said the decision was "more than disappointing", adding that captains' "basic rights to freedom of speech and expression" were being crushed by Fifa.

The decision was also condemned by anti-discrimination campaign group Kick It Out for continuing "to highlight Fifa's failure to address concerns of both human rights groups and the LGBTQ+ community in the build-up to this tournament".

"Players and fans should not have had to bear the burden of Fifa's mistakes and we will continue to support Gareth Southgate, and his team, as they look to explore other ways to support inclusion in football," the statement added.

Former England captain Alan Shearer told BBC Radio 5 Live the timing of the decision was "not fair" on players, adding he would have defied Fifa and worn the armband anyway.

"I would obviously have spoken to the manager and my preference would have been to say: 'I'll wear the armband and I'll take the hit,' he said.

"That would pose a bigger question and a bigger problem for Fifa than them not wearing it - and that's what I would do, if I could."