“It’s an honour and a privilege because it’s never happened before,” Mukansanga told BBC Sport Africa.

• A referee for world governing body Fifa since 2012, Mukansanga is taking her place on some of sport’s biggest stages after defying early rejections in life. Rwanda’s Salima Mukansanga hopes that being selected to referee at the men’s World Cup, the first time women are doing so in 92 years of the competition, will open doors for other aspiring female officials in Africa.

Earlier this year, she became the first woman to take charge of a match at the men’s Africa Cup of Nations, which was first played in 1958, while last year she officiated at the Olympic Games in Tokyo.

The 34-year-old hopes being one of six pioneering women — alongside fellow referees Stephanie Frappart and Yoshimi Yamashita and three assistant referees - in a men’s global tournament will create opportunities for more women.

“It’s an honour and a privilege because it’s never happened before,” Mukansanga told BBC Sport Africa. “It means you’re going to be the first one and going to open the door for other women, especially in Africa.

“You carry a lot on your shoulders and you need to carry it well, so others can see that the door is open and they can also go through.

“It means the opportunities are there — and it’s up to us to take them and become productive from them.”

A referee for world governing body Fifa since 2012, Mukansanga is taking her place on some of sport’s biggest stages after defying early rejections in life. 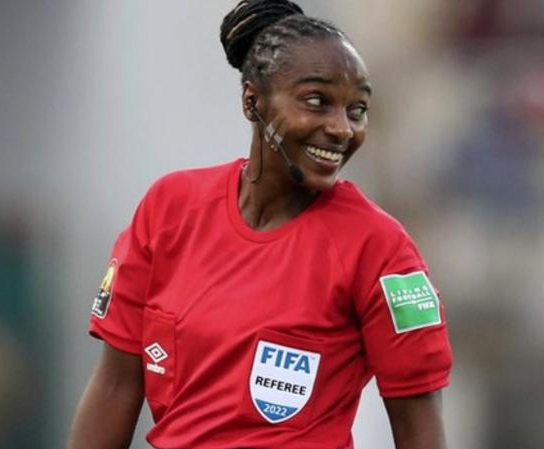 As a young girl, she chose to concentrate on football after being told she was not old enough to be part of a national Under-17 basketball side — but the latter sport ignited a fire within her.

“When I went to watch games, I saw these people inside the [court] called referees,” she explained at the Nations Cup in January.

“They could take decisions and change everything on the field of play, so I got excited and from that moment, while I was still in primary school, I started to think about those people.”

She started refereeing while in secondary school, on what was a rapid learning curve.

“I didn’t know there is a lot to do - laws to follow, a mentality to follow, a professionalism inside - but I started to learn step-by-step. It was very difficult. When you are reading the laws of the game, it’s easy to understand but inside the field of play, it needs some time to have a smell for the job.”

A short-lived spell as an amateur player led her across an advert announcing refereeing training, but after approaching the Rwandan FA (Ferwafa) about joining a referees’ course straight out of secondary school, she was again rejected for being too young.

So this softly-spoken, but determined individual, took matters into her own hands and taught herself Fifa’s Laws of the Game, with her hard graft rewarded when she was finally being given an opportunity to study with other aspiring referees by Ferwafa.

Mukansanga’s meandering journey has taken her from officiating men’s league games in Rwanda, to the 2016 Women’s Nations Cup, the 2019 Women’s World Cup and the Tokyo Olympics.

On January 18, a bigger landmark — being in the middle for Zimbabwe’s win over Guinea — came during the men’s Nations Cup in Cameroon, with Mukansanga handing out six yellow cards and separating squabbling players in a creditable and composed performance.

“After the final whistle, I was really emotional — I was really very, very happy,” she told reporters at the time.

“I was not alone inside the field of play. That emotion came from my colleagues and it produced happiness - because we made history and made the game go smoothly.

“We deserve to be here. We have our background, and from that comes passion and hard work and this is the fruit.”

Savouring such sweetness had taken years of overcoming obstacles however. 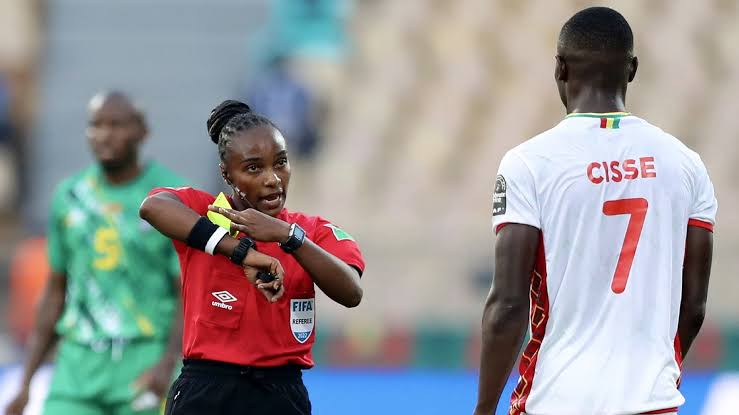 Shortly after her Nations Cup landmark, Mukansanga — whose only job is refereeing — outlined some of the challenges she has faced to make it, ranging from sexual and cultural differences to basic biology.

“We have our period — so sometimes you can’t be able to run or officiate,” she explained. “If pregnant — you can’t run. We give birth — so need time to recover, to prepare the body again for the next journey.

“Men’s speed is at a top level so sometimes I can’t run like men, but I can do more, push more to at least be on the same pace, have proximity with the players and a good angle of vision.”

Her training sessions and fitness tests are conducted alongside men, with Mukansanga overtly grateful to both Fifa and the Confederation of African Football (Caf) for their coaching classes.

Having dealt with an initially cold reception in the men’s game, the Rwandan — who makes quick decisions on the pitch — has embraced the challenges of the job.

“In a field dominated by men, you need to double your work — then have the passion, because without this passion you are going to get tired and then you leave it,” she explained. “But we don’t want to quit. We need to be one step ahead and work, succeed and fight together.”

“It’s an absolutely amazing milestone — she is in a unique position where she is one of the few people able to go to a senior men’s World Cup and a senior Women’s World Cup,” said Damon.

“It hasn’t been done before, so that speaks volumes for refereeing and its development in Africa.” 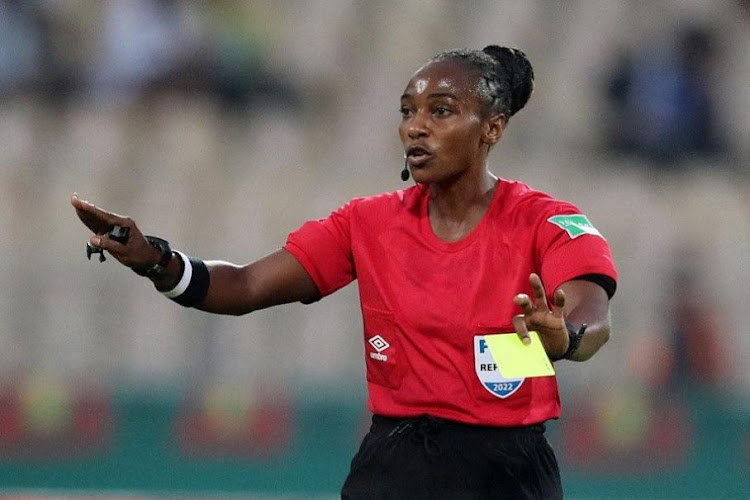 Earlier this year, Fifa said the appointment of the female officials for the men’s World Cup, whose matches in Qatar have yet to be announced, concluded a “long process”.

“It is quality that counts for us and not gender,” continued Pierluigi Collina, the chairman of Fifa’s referees committee.

“I hope that in future, the selection of elite women’s match officials for important men’s competitions will be perceived as something normal.

“They deserve to be at the World Cup because they constantly perform at a really high level.”

Mukansanga will be joined in Qatar by France’s Frappart and Japan’s Yamashita, as well as assistant referees Neuza Back from Brazil, Karen Diaz Medina from Mexico and Kathryn Nesbitt from the United States.

“We are going to work together for the success of women,” Mukansanga said. “If a woman is supporting another woman, of course you are going to see fruits.

“There are barriers, obstacles and challenges. There is nothing to do about them than for us to fight with a strong mentality, commitment and full engagement - then we will overcome.”

Mukansanga knows there will be extra scrutiny on her given the attention on football’s biggest tournament.

“People will never always be happy with you. So it’s up to you to do what you have to do - stay in the lines, don’t go out of the interpretation of the Laws of the Game and what the game demands.

It is the first time that women — three referees and three assistant referees —have been selected to officiate games at the world's most coveted ...
Sports
6 months ago

Three women will take control of the matches kicking off on November 21.
Sports
6 months ago

Mukansanga walked out onto the pitch holding the match ball accompanied by three male match officials with Zimbabwe going on to win the game 2-1.
Sports
10 months ago

It will be the first time only women will officiate a game at Africa’s flagship international tournament.
Sports
10 months ago
Post a comment
by BBC
Football
19 November 2022 - 00:00
Read The E-Paper