Gor boss defends coach over calls for him to resign

Gor Mahia are set to open their new season's account against Nzoia Sugar at Nyayo Stadium on Saturday.

•Three months into his tenure, the Irish tactician finds it difficult to convince the K'Ogalo fraternity he has the pedigree to restore the club to its former glory. 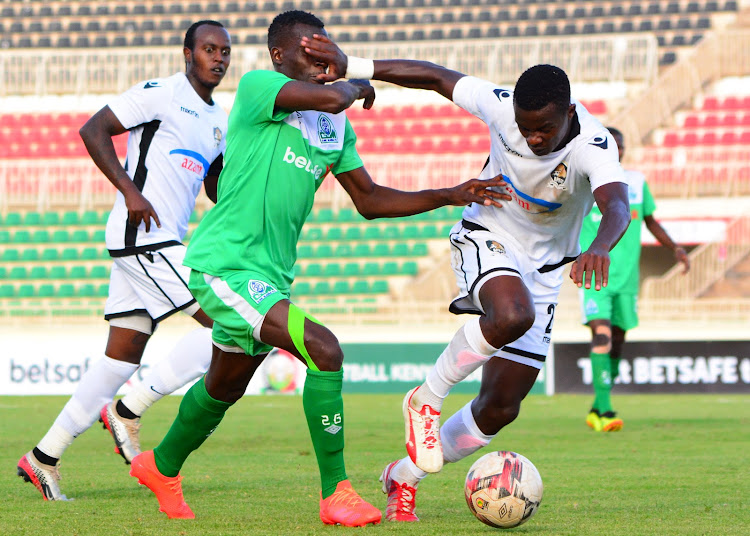 Gor Mahia's Philemon Otieno (L) fights for ball possession with Emmanuel Imanishimwe of APR of Rwanda in a past CAF Champions League preliminary round match at Nyayo Stadium
Image: /FILE

Gor Mahia secretary general Sam Ocholla has stepped up to defend head coach Jonathan McKinstry amid calls for his resignation by enraged fans.

Three months into his tenure, the Irish tactician finds it difficult to convince the K'Ogalo fraternity he has the pedigree to restore the club to its former glory.

Their most recent build-up match proved a disaster after they crashed 3-1 to Kenyan Premier League rivals Nairobi City Stars.

Following the debacle, several anxious fans have called out the technical bench and asked them to polish their act before the new season begins.

However, in an exclusive interview on Thursday, Ocholla pleaded with the Green Army's zealots to exercise patience as McKinstry and his charges strive to find a solution.

“They should understand that our match against City Stars was a friendly encounter and the players didn't' give 100 percent because some of them were scared of picking up injuries ahead of the start of the season,” Ocholla said.

On Thursday, Sportpesa, the club's shirt sponsor, held a colorful ceremony in a Nairobi hotel to unveil the club's new playing kit and Ocholla was among the top officials who graced the occasion.

Ocholla has urged the players who were acquired from the academy side to work hard and reach their full potential.

“The league is tight and so the players need to be mature. Our match against City Stars showed a lack of skills and all that.”

According to Ocholla, the club is in the process of clearing debts owed to former players and coaches as they prepare to beef up their squad in the next transfer window once the existing Fifa embargo has been lifted.

“We are trying to clear the debts by end of this month and in fact, we are talking to our sponsors to give us some money to offset the standing debt that amounts to around Sh5 million.

“All of our foreign players have taken us to Fifa over unpaid debts and we are in the process of identifying a good lawyer in Geneva to defend us because the cases have taken a huge toll on the club,” Ocholla said.

Gor Mahia are set to open their new season's account against Nzoia Sugar at Nyayo Stadium on Saturday.

This, even as the fate of the new Kenyan Premier League season hangs in the balance following a petition lodged by five teams at the Sports Disputes Tribunal on Wednesday.

The Football Kenya Federation has, however, moved to allay fears that the competition will be halted after releasing a statement on Thursday saying the season would continue as planned.

FKF said it would only put on hold matches involving the affected teams.

“The federation receives an order from the Sports Disputes Tribunal staying the decision by the FKF National Executive Committee on promotions and relegations, onthe just concluded league season,” the statement read in part.

“Further, please be advised that all other FKF PL matches which have not been affected by the order will take place as scheduled.”