Wayodi calls for tough mentality as she prepared to guide Vihiga

Wayodi, 27, was last week appointed to replace Enez Mango who left for two-month trials in Norway.

•Wayodi said there must be unity of purpose on and off the field for the legacy-makers to continue their dominance both locally and internationally.

• Considering most players who were recruited by former coach Alex Alumira have left, coach Boniface Nyamunyamu faces the herculean task of rebuilding the team. 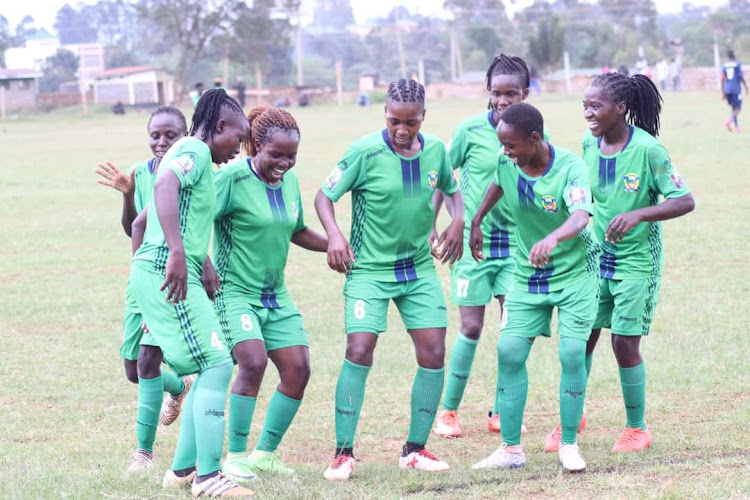 Vihiga Queens' players celebrate in a past match
Image: /HANDOUT

Newly appointed Vihiga Queens' captain Mercyline Wayodi wants senior players to give the new signings the necessary support to enable them to settle down at the club quickly.

Wayodi, 27, was last week appointed to replace Enez Mango who left for two-month trials in Norway.

Speaking for the first time, the journeywoman said there must be unity of purpose on and off the field for the legacy-makers to continue their dominance both locally and internationally.

"We have a lot of new young players some of whom will be playing in the top tier for the first time this season. They can only get better under the guidance of the experienced players," Wayodi said.

"Our system is robust and the players will definitely settle in quickly.  We still have last season's winning mentality  heading into the new season but obviously, there's pressure for us to perform because of the high-profile departures."

"I know the shoes I am filling are big but my experience over the years coupled with support  from everybody associated with the team will make us achieve our objectives."

The dynamic midfielder's career took off at Jera High School in Ugenya.  She joined Wadadia in 2014 and captained the team the same year.

She played for Oserian for three years (2015-2018) before dumping the Naivasha side for Kisumu All-Starlets. She became the shining light at the lakeside club before joining Queens in 2021.

"I will do everything possible for the badge. The call was massive but...yeah..responsibility gravitates to the person who can shoulder them and I am ready."

Considering most players who were recruited by former coach Alex Alumira have left, coach Boniface Nyamunyamu faces the herculean task of rebuilding the team.

"Our rivals are looking at us as a weak team but they are misguided if what I have seen so far in training is anything to go by. Everybody is entitled to their opinion but again that plays to our advantage."

Vihiga have won four Women's Premier League titles in the last five years and bagged the Cecafa Club Championship trophy in 2021 in Nairobi.

They managed one win in the inaugural CAF Women's  Champions League in Egypt also last year.

Wayodi beat stiff competition from Maureen Ater and Felistas Kadari to the armband left by Enez Mango's departure. Mango is in Norway for a two-month ...
Sports
4 months ago

Mango, who prides herself as the most decorated captain, has bagged four women's Premier League titles in five years.
Sports
4 months ago

Why Tanzanian league is attractive to Kenyan footballers

About 20 high-profile athletes ply trade in various clubs at the East African country situated just south of the Equator.
Sports
4 months ago
Post a comment
by EVANS OUSURU
Football
11 October 2022 - 05:00
Read The E-Paper