'THIS IS MY STORY'

“I am not from a well-off family but with football, I was able to cater for my school fees. It was a huge relief for my mother," says Kikwatu.

• Through the years, Kikwatu has played for the likes of Mathare United, Thika United, Gaspo FC and Kibera Soccer.

• Away from football, Kikwatu works as the organising secretary at Rachel K Foundation, who have branches in Nairobi and Texas, USA. 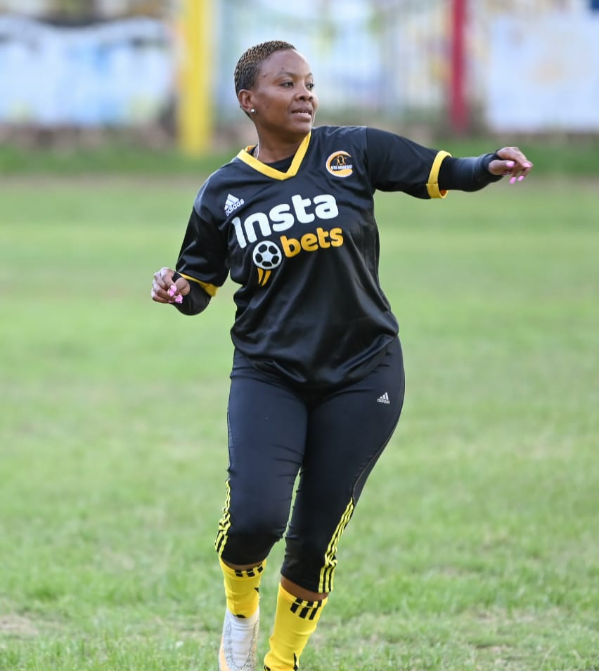 Agnes Kikwatu in action during a past match

The Kenyan football scene is known to be competitive and as a lady, one is bound to face numerous challenges before making it to the top.

The ride is bumpy and some tend to give up on their dreams due to such tough times. However, football sensation Agnes Kikwatu, alias Kamash, has proven that anything is possible if you set your focus on achieving your targets.

Kikwatu was born on March 11, 1994, in Mathare. She was raised up in a family of six — five girls and a boy. Kikwatu never saw herself as a football star in the making.

She started playing football as a small girl but discovered her talent at 10. The versatile midfielder eventually started ruling the grounds in Mathare North. She made a lasting impression in her first-ever senior appearance for Mathare in a tournament held in Kisumu in 2005.

It wasn't surprising to see Kikwatu make her mark especially coming from a slum area, considering most of Kenya's top football players were raised in informal settlements.

“You know the ghetto and football are somehow intertwined," says Kikwatu. "My interest in the sport started when I was 10 and I have never looked back. I faced a lot of backlash from those around me, who believed football was a male sport."

“My dad didn’t want me to play football, with the belief that I was better than that. This was one of the worst moments in my career. However, with time, he had to accept because I had made up my mind,” she adds.

Coming from a poor background, Kikwatu gave her critics a deaf ear. Her focus was to uplift her family.

She reveals that from Class Seven, she paid for her school fees and was able to support her family. She adds that playing football helped her in developing resilience through life challenges. Playing football also enabled her to get scholarships.

Kikwatu went to Mercy Care Centre Primary School in Kasarani and joined Maina Wanjigi High School, where she studied for just a year before transferring to Olympic High School for the rest of her 'O' Level education.

“I was not from a well-off family but with football, I was able to cater for my school fees. It was a huge relief for my mother. She has been a great support system to me,” she says.

Through the years, Kikwatu has played for the likes of Mathare United, Thika United, Gaspo FC and Kibera Soccer. Currently, Kikwatu is in the books of Kuludeng FC, who play in the Wazee Premier League. Kuludeng is composed of ex-international players and Kikwatu is the only woman in the 11-member playing unit. 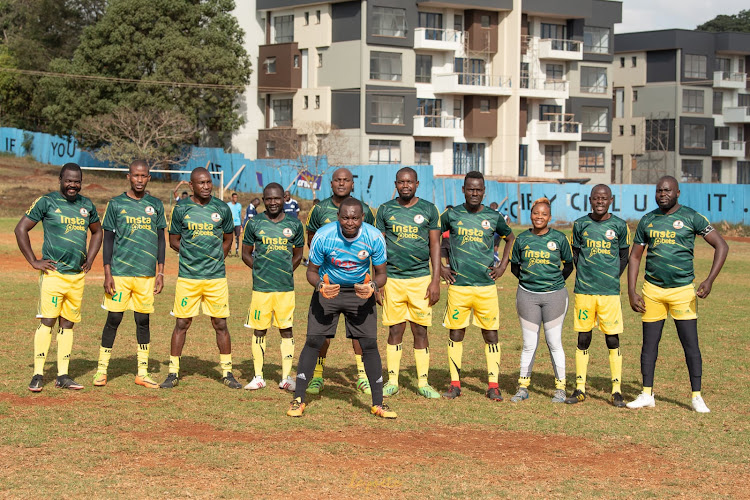 In addition to playing for Kuludeng, Kikwatu coaches Terror Squad FC, a men's team based in Kasarani. The journeywoman added that her experience on the field was the catalyst for her enrolling in coaching.

“I wanted to share the knowledge I had amassed and the only way to do that was through coaching," Kikwatu points out.

She says the highlight of her career was in 2007 when she played for Mathare Youth Sports Association (MYSA) at the Norway Cup.

“I didn’t know someone needs a passport to travel abroad. My first outing to Norway was very adventurous and I was excited to meet different people. Playing in some of the world’s biggest stadiums is also an achievement I don’t take for granted,” Kikwatu says.

Kikwatu looks up to football star Megan Rapinoe, the US captain who led her team to the 2019 Women's World Cup title in France. The 37-year-old is one of the most decorated players in the world.

Rapinoe plays as a winger and captains OL Reign of the National Women's Soccer League (NWSL). She is internationally known for her crafty style of play on the field and her activism off it.

Nonetheless, Kikwatu's journey has not been without challenges. She faced a tough balancing act between her daily activities and football.  She adds that sexual harassment is rife in the women's game.

Having seen it all, the mother of one reckons that women's football needs equal treatment to their male counterparts in terms of international exposure and prize money.

She said female footballers need more international assignments to expose their talent, which will in return attract deals from foreign clubs. 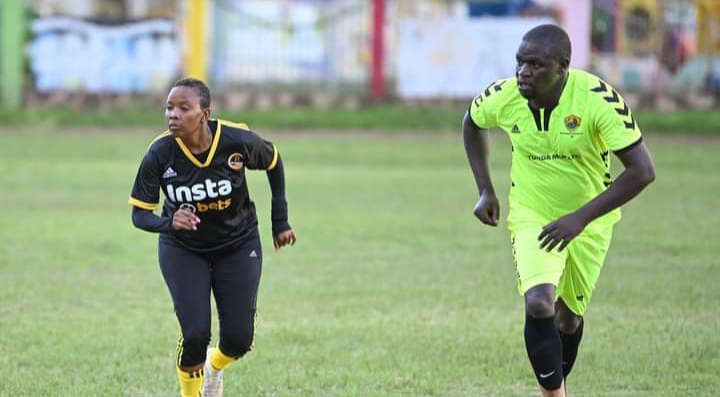 Agnes Kikwatu in action at a past tournament
Image: COURTESY

Kikwatu, who, unfortunately, was never capped by Harambee Starlets, observes that Kenya missing out on this year's Africa Cup of Nations was a low moment for the women's game.

Kenya are currently banned from international competitions, both CAF and Fifa, following a stalemate between the Kenyan government and the world governing body over the eviction of Football Kenya Federation president Nick Mwendwa.

"Starlets have spent a short time on the international stage but they look promising. In the next few years, they will be a force to reckon with. Logistical challenges have been our Achilles heel for a while but we have the talent to compete at the grandest stage. We need to put our house in order to take the sport to the next level," she says.

Meanwhile, Kikwatu has revealed how tough it was when she took maternity leave.

“It was tough to come to terms that I was no longer playing after conceiving. The financial burden increased but I had to soldier on. This is the time partners are needed the most," she observes.

As a way to give back to the community, Kikwatu hopes to mentor young girls from the slums.

“I want to be a mentor. I want to see more footballers coming up and realising their dreams,” she says. 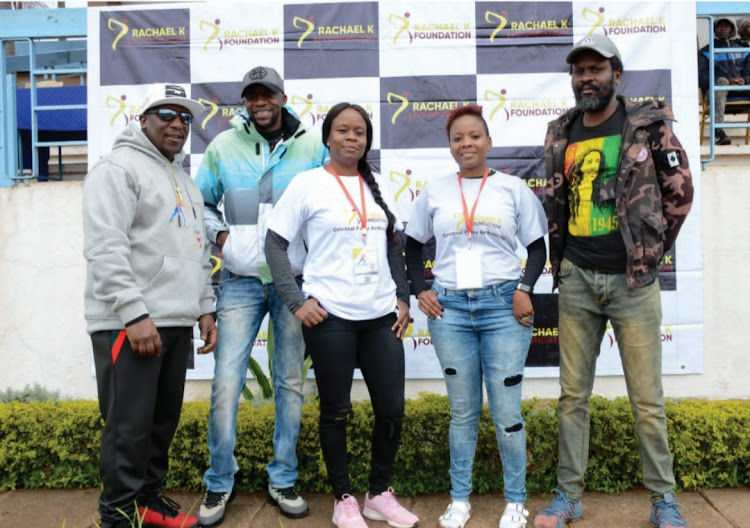 Away from football, Kikwatu works as the organising secretary at Rachel K Foundation, who have branches in Nairobi and Texas, USA. The organisation deals with children suffering from cerebral palsy and epilepsy.

Kikwatu says the Foundation's mission is to provide basic needs as well as therapy for this demographic. She adds that children whose conditions are not prohibitive are allowed to engage in sports like football.

“Some of the children at the organisation get the chance to play football as well as travel to watch some games,” she said.

The organisation also aims at creating awareness about the disorders as well as nurturing talents.

“We use sports as a stepping stone to create awareness about the disorders. We are looking to build talent too, not necessarily sports, in these children. We want to show the world that people suffering from these conditions should not be considered as lesser human beings,” she concludes.

Karambu hopes for a fresh start after joining Sparks

The attacking sensation was signed last week after successful trials and the wing-wizard has already teamed up with the rest of the squad.
Sports
1 month ago
Post a comment
by ABIGAEL WAFULA
Football
07 October 2022 - 05:00
Read The E-Paper