But Saturday’s outstanding 3-1 win against Tottenham in the north London derby offered further proof that this is a team and club that have rediscovered their identity.

• This was an emphatic performance and victory, the hosts controlling affairs from pretty much first to last in a display that suggested they are genuinely moving forward once again.

• Jesus, a comparative bargain at £45m, sets the tone with relentless pressing and goals that have already made him an indispensable part of Arteta’s plans, while Zinchenko brings quality, calm and creation. 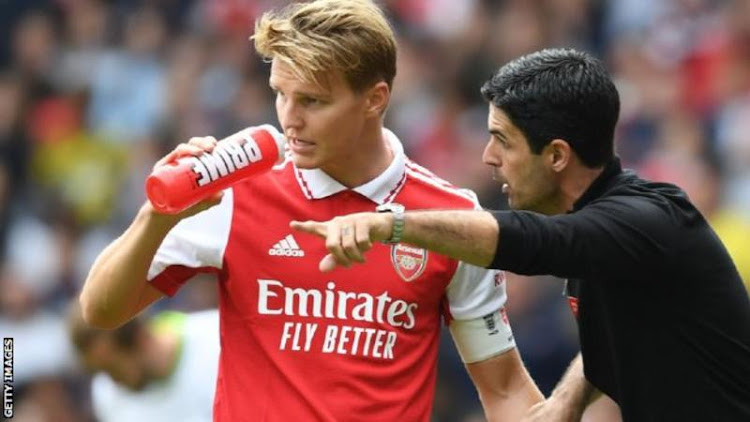 Recent history acts as a warning not to get carried away when Arsenal look as though they are finally emerging from their long post-Arsene Wenger transition period — but this time it feels like the real thing.

This, it must be stressed, is not to mark Arsenal out as potential Premier League winners or acclaim them as the finished product — there have been false dawns before, under both current manager Mikel Arteta and his predecessor Unai Emery.

But Saturday’s outstanding 3-1 win against Tottenham in the north London derby offered further proof that this is a team and club that have rediscovered their identity.

Antonio Conte’s Spurs — riding high in the table themselves — were supposed to provide another serious test of Arsenal’s progress, even though history was against the visitors.

Tottenham have not won in the Premier League at Emirates Stadium for 12 years, with Arsenal losing just one of their last 29 home league games against their bitter rivals. So while the result itself may not have been surprising, the manner of it certainly stood out.

This was an emphatic performance and victory, the hosts controlling affairs from pretty much first to last in a display that suggested they are genuinely moving forward once again.

Are Arsenal really a lot better this season?

Arteta faced much scrutiny after Spurs pipped the Gunners to Champions League football on the final day of last season, with opposite number Conte deservedly hailed for the transformation he had overseen in just a few months at the helm.

Arsenal needed a similar revival and so Arteta went in search of what he knew: bringing in Gabriel Jesus and Oleksandr Zinchenko, both of whom he had worked with when assistant manager at Manchester City, and welcoming defender William Saliba back into the fold after a series of loan spells. The effect has been transformative.

Jesus, a comparative bargain at £45m, sets the tone with relentless pressing and goals that have already made him an indispensable part of Arteta’s plans, while Zinchenko brings quality, calm and creation.

Perhaps most crucially of all, they bring experience and the required mentality to win trophies from their years of collecting silverware at Etihad Stadium. City boss Pep Guardiola was a huge admirer of the qualities Jesus brought but the chance to sign Erling Haaland was impossible to resist and would have inevitably reduced the Brazilian’s opportunities in a World Cup year. This was the rare case of a transfer deal suiting all parties.

He was involved in 41 games in all competitions for City last season, making 28 starts, scoring 13 goals with 11 assists. Jesus has made eight starts for Arsenal and his goal against Spurs was his fifth.

Saliba, meanwhile, has returned to Arsenal looking like the finished article after the 21-year-old France defender spent loan spells at Saint-Etienne, Nice and Marseille. He has been imperious since the opening game at Crystal Palace, establishing a formidable, powerful partnership with Gabriel.

The recruitment over the summer has left Arteta presiding over a rich blend of youth and experience. A class act. Arsenal are playing with real verve and energy further forward, also fuelled by Bukayo Saka, Martin Odegaard and Gabriel Martinelli, while Thomas Partey and Granit Xhaka were both on the scoresheet from midfield.

The big questions around Arsenal have always centred on how they react to adversity and the true tests have yet to come - but examinations have been passed so far this season.

Arsenal were excellent for long periods even in defeat at Manchester United, while here they overcame the frustration of Gabriel’s rash challenge on Richarlison giving Spurs an equaliser they barely merited when Harry Kane scored his 14th goal in north London derbies from the spot.

‘Things are happening for Arsenal’

Spurs have not exactly been pleasing on the eye this season but have the Conte characteristics of steel and the ability to get the job done when not at their best. That was not the case here. Arsenal were too quick, too inventive, from the start and apart from a short spell just after Kane’s equaliser, Spurs were laboured and poor.

Kane and Son Heung-min could not get into the game, Richarlison was occasionally a nuisance in the first half, while goalkeeper Hugo Lloris produced another of those blunders that belies his big reputation as he let the ball roll under his body, allowing Jesus to pounce for Arsenal’s second.

The Spurs fans made for the exits long before the end, leaving Kane and his colleagues applauding more red seats than supporters after the final whistle. It had been a thoroughly miserable day for the visitors. Arsenal supporters, in contrast, were ecstatic as the strains of “Glad All Over” echoed around Emirates Stadium.

The optimism must be guarded and Arsenal face another big test in their next league game at home to Liverpool - but the overwhelming feeling is that things are moving in the right direction in this part of north London.

In the last of those, which was a defeat at Manchester United, he suffered "a significant setback".
Sports
2 months ago

Conte's frustration was made worse by Royal's reckless challenge on Martinelli that prompted a straight red card.
Sports
2 months ago

Thank heavens we are back for the major leagues just before the Fifa World Cup in November.
Sports
2 months ago
Post a comment
by Phil McNulty
Football
03 October 2022 - 00:00
Read The E-Paper